Catalogue One from Voewood Rare Books 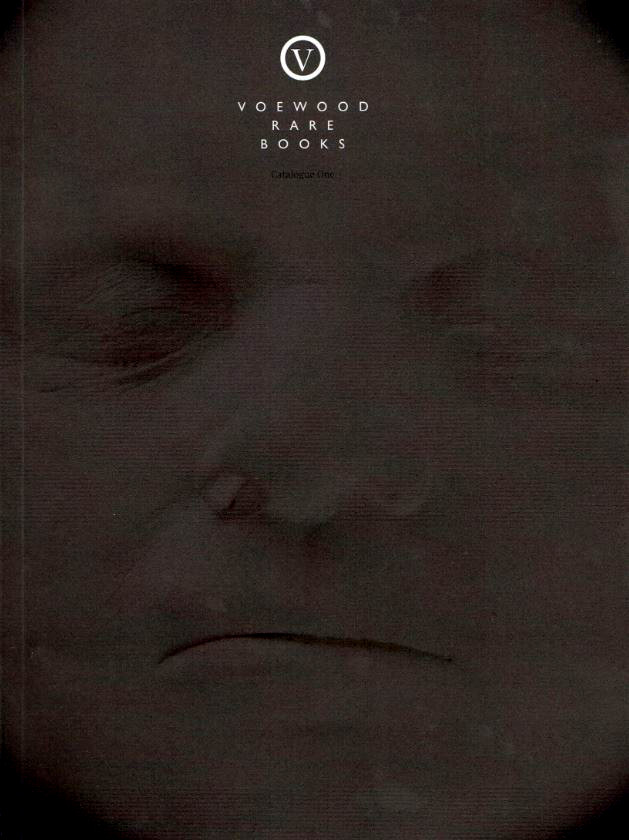 Catalogue One from Voewood Rare Books.

Voewood Rare Books has issued a first, their Catalogue One. They are located in Holt, County of Norfolk, England. While a first catalogue implies a new bookseller, and in a sense Voewood is, it is also a long established, well-respected firm. Voewood is the successor to Simon Finch Rare Books, now located in a spectacular English setting. In America, we would call Voewood (the estate) a castle, but perhaps they call them something else in Britain, like a cottage in the countryside. In England they understate, in America we overstate. The catalogue has no further title, but perhaps the section headings may help make what they offer clearer. Then again, maybe they won't. Here they are: The Making of a Book; Inscriptions, Presentations, Letters, Marginalia, Annotations; Poetry; Pornology; Art & Photography; Phenomenon and Noumenon; and Death and the Devil. Here are a few specific examples of what can be found between poetry and pornography. As an aside, if you look carefully at the cover, that is not just a charcoal gray slate, but the features of a face. They are from from the life mask of Francis Bacon, the 20th century artist, not the 17th century philosopher.

When you think of English queens, undoubtedly two names come to mind, Elizabeth and Victoria. Pick your Elizabeth. Here is the other. Item 12 is Leaves from the Journal of Our Life in the Highlands, from 1848 to 1861. The keeper of the journal was Queen Victoria, and the other half of the "our" was her husband, Prince Albert. Along with the visits to the Highlands are journal accounts of trips to Scotland, tours of England and Ireland, and yachting excursions. There are even some illustrations drawn by the Queen herself to picture some of the entries. The accounts were edited by Arthur Helps (a great name for his role), this being a second edition from 1868. The reason for the cut off at 1861 is that is the year Prince Albert died. For all the privileges and power of being the Queen of England, Victoria was enveloped by a deep sadness over the loss of the love of her life, one she never got over. This copy is inscribed by Queen Victoria in 1881 to Lord Thurlow, a baron and briefly Paymaster General. Priced at £650 (British pounds, or approximately $861 U.S. dollars).

Item 51 is a photo book from Bill Brandt. Brandt was German born, but to an English father. In the 1930s, he concluded, quite wisely, that there were better places to be than Germany and made his way to his father's homeland. The title of this book is A Night in London. Story of a London Night in Sixty-Four Photographs. It was published in 1938, two years after his earlier photographic effort, The English at Home. Like the earlier book, Brandt's camera reaches all levels of society, poor and rich. He says, "I photographed pubs, common lodging houses at night, theatres, Turkish baths, prisons, and people in their bedrooms." The book was patterned on the earlier work of Bressai, Paris de Nuit. Captions are in both English and French. £2,500 (US $3,312).

If you are wondering what sort of items would appear under the heading "Death and the Devil," here is an example. This piece may not be everyone's taste, but it is history. Item 80 includes two death warrants, issued in Kent. The first is for four men, Richard Kelshall, George Draper, Charles Draper, and John Carter. They were highwaymen, and such individuals made travel in the 18th century a grave danger. The law had no sympathy and little mercy for such people. Convicted on March 11, 1782, the Sheriff of Kent orders "Thomas Watson my Gaoler" to carry out the hangings on March 28. There were no lengthy appeals in those days. The second warrant is for William Roberts, also convicted of highway robbery. He was convicted on July 28, 1789, and Gaoler Watson was ordered to carry out his hanging on August 13. These are priced at £1,000 each (US $1,325).

Next is a lithograph sheet in red ink from Jamie Reid's Suburban Press from 1972. Reid is a radical artist whose work was adopted by some in the punk field, notably for album covers and posters of punk rockers the Sex Pistols. This piece was produced as stickers to be placed on shops and businesses in London. It blares out Last Days. Official Warning. Closing Down Sale. This is not your typical going out of business sale. Read further and it says, "Buy now while stocks last! This store will be closing soon owing to the pending collapse of monopoly capitalism and the world wide exhaustion of raw materials." This has been a lengthy going out of business sale with still no closing date in sight. Item 62. £750 (US $993).

I don't recall ever seeing a heading for an item in a catalogue that ended in a question mark, but here is one: Sub-Saharan Africa's first daguerreotype? Maybe. It is an image of the de Smidt family of Cape Town. It is in a frame on which is written that it was taken by Sparmann in 1843. A paper label also identifies the date as 1843, and describes the people as "My grandparents W.A.J. de Smidt and S.M. de Smidt and their sons, from left to right, Abraham, Petrus, Johannes, and Adam Gabriel." It is in a contemporary cardboard box with a label reading "1843. Daguerrotype group, de Smidt family dated 1843." The year 1843 matches the apparent ages of the children, and Willem A.J. de Smidt received a major promotion that year, perhaps leading to the decision to take a family portrait. Photographer Carrel Sparmann opened his photography shop in 1846, which, along with that of another, was the date of the first photography businesses in Sub-Saharan Africa. That would put this photograph prior to the opening of his shop, but Sparmann had emigrated to Cape Town from Germany in 1838, where he tried his hand at a couple of enterprises. Item 49. £1,250 (US $1,656).