A Variety of Important Material from Raptis Rare Books 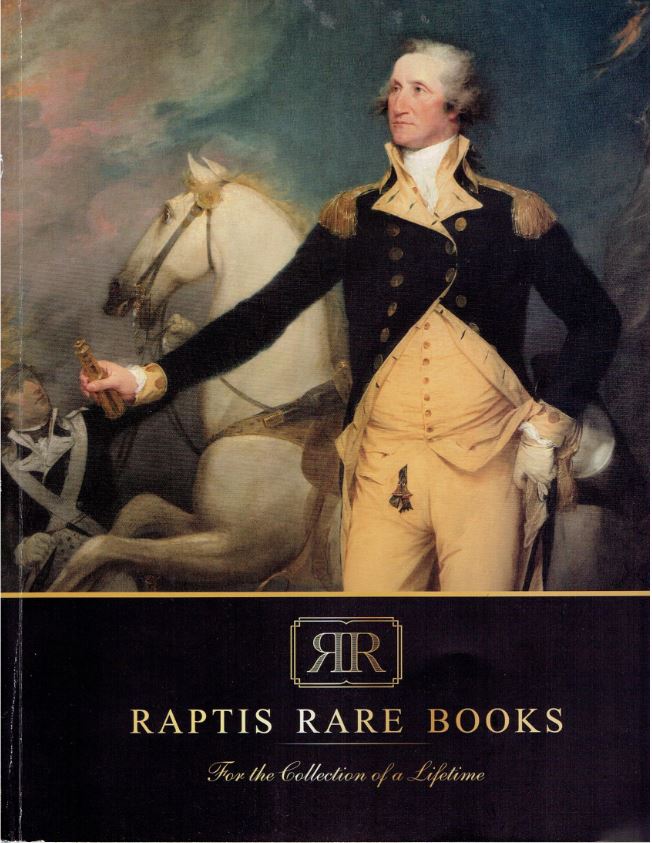 The latest from Raptis Rare Books, by George!

Raptis Rare Books has issued a new, untitled catalogue, but with a table of contents to give us a look at what is inside. It is something of a miscellany. The topics covered are Americana; Science, Religion & Philosophy; History & World Leaders; Travel & Exploration; Literature; Music, Fine & Performing Arts; Children's Literature; Golf, Sports & Leisure; and Economy, Law & Finance. Raptis handles material at the higher end of the market, important works by notable people. As a few samples will show, you won't be disappointed. By the way, is that George Washington on the cover, having a beer while on duty during the Revolution?

It's unusual for a senior thesis to be converted to a book, and to then become a best seller no less, but this writer was not a typical student. In twenty years, he would be President of the United States. Why England Slept was John F. Kennedy's senior thesis at Harvard, and was sufficiently insightful to warrant publication. Of course, it didn't hurt that his father was ridiculously rich and Ambassador to England. The title is a play on Churchill's book While England Slept. Kennedy's position was not to place all of the blame for World War II on Neville Chamberlain. He points to the difficulty in making choices in a democracy, while Germany had an absolute ruler who could move swiftly without having to win any votes or debates. Kennedy was in an awkward position personally since his father had favored passivity toward Germany as it became more threatening, but by the time this book was published in 1940, the world realized that appeasement was a disaster. This copy of Kennedy's book is inscribed with thanks to "Miss Brown." She was JFK's father's personal secretary Mona Brown, who helped transcribe this book. Priced at $25,000.

If you are ready for a trip west, here is a great account of what to expect. Well, perhaps what you could have expected 170 years ago. Francis Parkman recounts his travels and what he found in The California and Oregon Trail, published in 1849. He and his companions set out on horseback from the starting point in Missouri in 1846. At that time, travel was just starting to pick up among emigrants from the East seeking free land and a brighter future. Parkman didn't make it to Oregon or California. He never went past eastern Wyoming, avoiding the most difficult part of the journey, either through high mountains or scorching deserts. However, Parkman was very talented at putting what he saw to words, and his side trips brought him into contact with the Native Americans of the area. His opinions are skewed by the values of those with European backgrounds, but nonetheless he does relay information about people who were mainly a mystery or a cliché to those back home. $3,000.

Next up is a massive collection of The Writings of Mark Twain. It consists of 37 volumes, and its hard to imagine reading that much by anyone, but if there is someone who could be entertaining across that many volumes, it would be Twain. This was intended to be the definitive edition of his collected works. It was published in a limited edition of 1,024 numbered sets in 1922 and is signed by Twain. You are probably thinking no one is going to fool you into thinking a 1922 signed edition is not a forgery. Twain died in 1910. Twain, as always, gets the last laugh. He signed individual leaves in 1906 for a planned edition, but it never came to pass until 1922. $12,500.

Here is another book that you might think must have been signed in the same fashion as Twain's, but is actually a normal signing. The book is The Wright Brothers, by Fred C. Kelly. Raptis describes this as "a fascinating, highly readable biography" by "an old friend of the Wrights [who] tells the story of the two brilliant, dedicated, flight-obsessed bicycle mechanics from Ohio who first realized mankind's age-old dream of conquering the skies." The Wright Brothers brought a glider to Kitty Hawk in 1900, but they were not the first. It was what they did in 1903 that put them in the history books, when they added an engine and accomplished the first powered flight. This biography was published in 1943 and inscribed by Orville Wright in 1944, which may sound suspicious, but is not. Orville lived all the way until 1948, though Wilbur died in 1912. Orville authorized this biography and inscribed it to Charlotte Seitner. She was a neighbor and friend of Orville, along with being a historian and life-long collector of Wright Brothers memorabilia. $9,200.

If you own stocks, it is doubtful you have the stock certificates, just some virtual recognition in a broker's account. Once upon a time, they came with certificates, but this one is special. It is for Standard Oil and dated May 25, 1887. It is signed by John D. Rockefeller himself. It is also signed by Henry Flagler, the company Secretary and a founder who did quite well too, though not on the Rockefeller scale. This certificate was issued to R. J. Thompson and is for 100 shares. If you can get Standard Oil's successor companies to recognize this certificate as still valid, you will achieve wealth beyond your dreams. The price for a chance is $7,200.

This is a cautionary tale. Written by Sinclair Lewis and published in 1935, the title is It Can't Happen Here. It is a story about the fragility of democracy, one where a dictator seizes control. That was already happening in Europe, notably Germany and Italy, at this time, but even Lewis probably couldn't have imagined how much worse it could get. Raptis describes the book as "a chillingly realistic rise of a president who becomes a dictator to save the nation from welfare cheats, sex, crime, and a liberal press." Don't fool yourself. It can happen anywhere if people are not vigilant. $1,200.