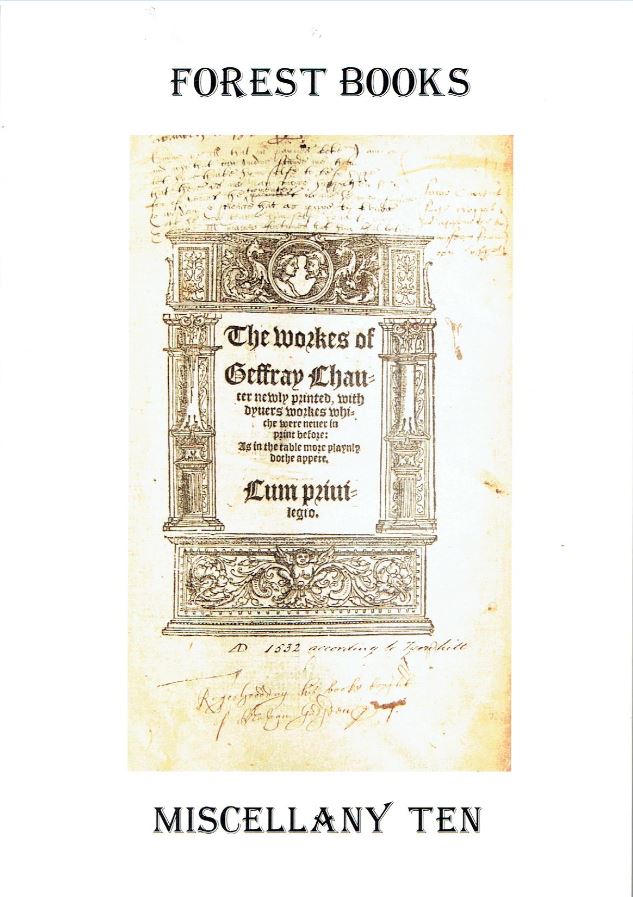 Forest Books has issued their Miscellany Ten. A Catalogue of Rare and Curious Books, Pamphlets & Printed Ephemera on a wide variety of subjects. Naturally enough, it contains all sorts of material. Most items come from England. There are many books, but you will find other sorts of paper, such as maps and broadsides. There is a large selection of very early English railroad material. Virtually everything, for that matter, is early. This is an antiquarian catalogue. Here are a few selections.

We begin with a work from one of the greatest naturalists of the 19th century. Alfred Russel Wallace spent eight years in the Malay Archipelago, returning home with some 126,000 zoological specimens. He collected them both for study and knowledge and to make a living by selling them. It was while he was there that Wallace came up with a brilliant explanation for why various species between islands had distinct differences yet great similarities. He concluded it must be evolution by natural selection. Of course, anyone would say that today, but at the time, Darwin had not yet released his theory to the public. Wallace sent his theory to Darwin, already a friend, who had independently reached the same conclusion. The two decided to publish a paper together describing the theory. It preceded Darwin's famous On the Origin of Species by a year. Wallace continued writing about what he had learned. Item 194 is one of those works, a two-volume first edition from 1876 of The Geographical Distribution of Animals. With a Study of the Relations of Living and Extinct Faunas as Elucidating the Past Changes of the Earth's Surface. Priced at £750 (British pounds, or approximately $997 in U.S. dollars).

Here is one of those early British railroad books. The first railroads in England were constructed in the 1830s. At the time this book was written, 1837, the first were only just opening for travel. However, many lines were already in the planning stage by then, as this book attests. Compiled by Francis Whishaw, the title is Analysis of Railways: consisting of a series of reports on the twelve hundred miles of projected railways... It contains distances from London to eight outlying locales, and a table showing costs, mileage, curves, tunneling, etc. for each railway for which bills were proceeding through Parliament. Item 238. £275 (US $365).

Next up we have Flora of Suffolk. This sounds like one of those 19th century romantic novels. It isn't. Flora is not a young lady, but a whole mess of plants, specifically, those that inhabit Suffolk County in England. Rev. J. S. Henslow and Edmund Skepper provided this description of the plants found in the wild in Suffolk, including those both indigenous and introduced. It was published in 1860. Item 74. £45 (US $59).

Here is a subject few great books have been written about. It's not one of those topics one generally enjoys discussing, but here is a chance to read up on it in uncomfortable privacy. The title describes it well: Commentaries on the Use and Necessity of Lavements in the Correction of Habitual Constipation, and in the Treatment of those Diseases which are occasioned or aggravated by Intestinal Accumulation and Irritation, or which are Susceptible of Modification through the Sympathetic Relations of the Lower Bowels; Including also a Copious Formulary of Intestinal Injections, with Directions for their Application. For the record, lavements is an old term for enemas. Item 163. £110 (US $146).

Now for a more pleasant subject, at least from an English point of view - war with France. England and France were constantly at war with each other for centuries, interrupted only briefly by peace so they could fight anew. They must have enjoyed it or they wouldn't have fought so much. The year was 1794 when James Rennell wrote this pamphlet. The two countries were at peace, but England watched the French Revolution, which it never liked even in its better days, break down into chaos and bloodshed. Rennell had the usual remedy. His plea is entitled War with France. The only Security of Britain, at the Present Momentous Crisis. It would come soon enough, what with Napoleon coming to power and out to conquer the world. Item 152. £75 (US $99).

Here is an odd title by Thomas Doolittle, published in 1693: Earthquakes Explained and Practically Improved; Occasioned by the late Earthquake on Sept. 8. 1692. in London, many other parts in England, and beyond the Sea. I can understand explaining them, but how do you improve an earthquake? Doing away with them entirely would be the best outcome, but no one has figured how to do that yet. This book describes the London earthquake of September 8, 1692, and the far more destructive one in Jamaica earlier that year. It rearranged the island's geography, practically sinking the city of Port Royal. Thousands died in that quake and ensuing tsunami. Item 40. £775 (US $1,030).

Here is a man who sought to upgrade British behavior in the 18th century, presumably to little effect. He tried. Item 144 is Thomas Pollen's 1771 book, The Fatal Consequences of Adultery, to Monarchies as well as to Private Families: with a Defence of the Bill, passed in the House of Lords in the Year 1771, Intituled, "An act to restrain persons who shall be divorced for the crime of adultery, from marrying, or contracting matrimony, with the party," &c. This bill would have prohibited one who committed adultery from marrying their partner in crime, and from the children of that relationship inheriting from them (like it was their fault). The lords may have thought this a good idea, but the commoners apparently did not. The bill never made it through the House of Commons, and so adultery continues in England to this day. £175 (US $232).