The World of Diaghilev from Shapero Rare Books 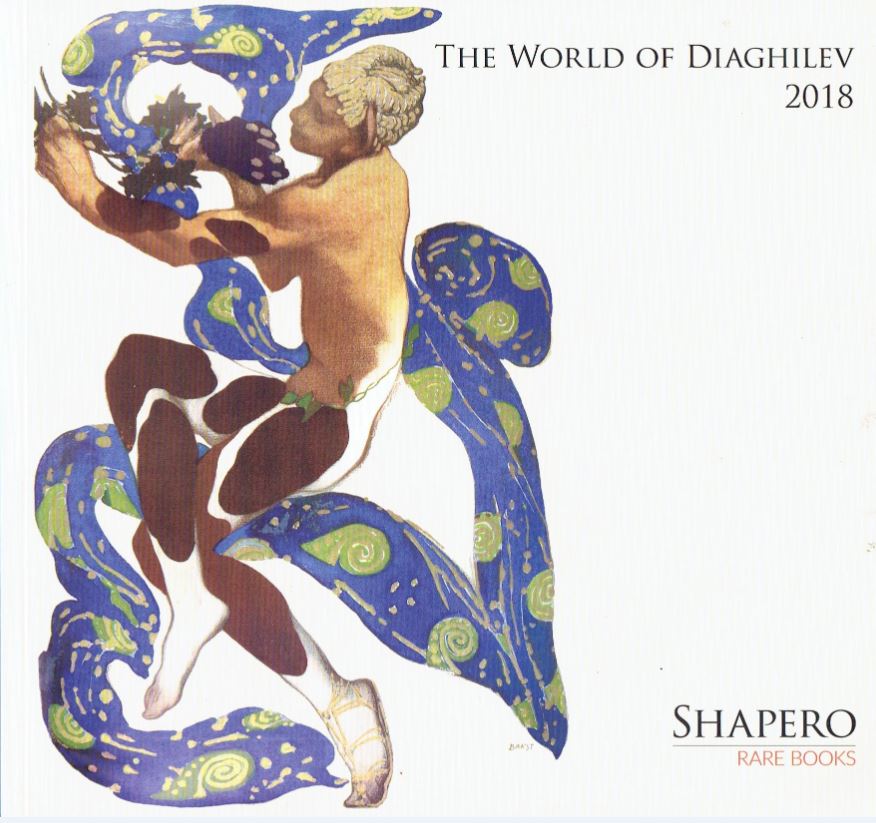 The World of Diaghilev.

Shapero Rare Books has issued a catalogue featuring The World of Diaghilev. Serge Diaghilev was a Russian born and educated man who, in the early 20th century, became influential in various forms of artistic expression after a brief, unsuccessful attempt to become a music composer. In his university days, he formed friendships with like-minded students, developing a flair in the field of theatrical productions. Several of those friends would play crucial roles in his career later on. He could coordinate musicians, dancers, and scenery into creative new productions.

In 1905, Diaghilev organized an art exhibit in Russia, which the following year he took to Paris. He would stay. By 1907, he was promoting concerts, a year later, presented the Russian opera Boris Godunov to Parisians. Then came the event for which he is most closely associated, the Ballet Russes. Those were spectacular performances, featuring dancers whose names still ring today, including Nijinsky and Anna Pavlova. The Ballet Russes not only featured the greatest dancers, but Diaghilev commissioned works by composers such as Stravinsky and Debussey, and artists like Picasso and Matisse. Set and costume designers included Russian university friends Leon Bakst and Alexandre Benois. The Ballet Russes did not confine itself to Paris, but went on the road, even to America. The one place it did not venture was Russia, Diaghilev deciding not to return after the Revolution. The Ballet would be the center of his life for twenty years. He invested his time and money, plowing almost all he made back into its productions. The Ballet Russes closed in 1929, only a few weeks before Diaghilev died.

Now, here are a few items from The World of Diaghilev.

We begin with the program for the first production of Boris Godunov outside of Russia. The actual Boris Godunov was a tsar at the turn of the 17th century. His story was turned into a play by Alexander Pushkin in the early 19th century. In turn, Modest Mussorgsky expanded it into an opera later in that century. Diaghilev brought it to Paris in 1908 with a spectacular production that would set him up for the Ballet Russes performances, which would dominate the rest of his life. Nikolai Rimsky-Korsakov had revised Mussorgsky's opera and this is the version that was produced by Diaghilev in 1908. The program includes a portrait of Rimsky-Korsakov. It is somewhat ironic that Diaghilev was promoting Rimsky-Korsakov's music as he had been the latter's student at the university in Russia, and while earning a degree in composition, the master discouraged him from proceeding further in the field. He believed Diaghilev lacked a talent for writing music. Evidently, there were no hard feelings. Item 1. Priced at £975 (British pounds, or approximately $1,282 in U.S. dollars).

Speaking of Pushkin and Rimsky-Korsakov, here is another of Pushkin's creations that was later turned into an opera by the latter. Some of Diaghilev's associates were involved in its production as an opera, though I find no sign that Diaghilev was involved. However, this item skips the opera production. It is an edition of Pushkin's poem Conte de Tsar Saltan (the Tale of Tsar Saltan) published in 1921, almost a century after it was written. This edition is notable for its illustrations by Natalia Goncharova. She was another Russian ex-pat who moved to Paris after the Revolution. Along with illustrations, she designed sets for Diaghilev. Goncharova was an appropriate choice for illustrating this poem as her great-aunt was married to Pushkin. She was an avant-garde artist, whose beautiful illustrations are appropriate for this fantastic tale. Unlike Boris Godunov, this Pushkin story is not based on reality nor anything resembling it. There are ten hand-colored illustrations in this book. Item 40. £3,750 (US $4,937).

Next is an original signed watercolor by George Barbier from 1913. Barbier was an artist and also set designer for the Ballet Russes. This painting is taken from Diaghilev's production of Rimsky-Korsakov's Scheherezade. It features two of the Ballet's most notable dancers, Nijinsky and Ida Rubinstein. This watercolor was used as an illustration in Barbier's book Designs on the Dances of Vaslav Nijinsky. Nijinsky's costume was designed by Barbier. Displayed is a dramatic scene, with Nijinsky's character on his knees in front of Rubinstein. Item 16. £10,000 (US $13,180).

Item 8 is a 1930 edition of the periodical La Revue Musicale. This one features Les Ballets Russes de Serge de Diaghilew. It was published the year after he died. La Revue Musicale was published from 1920-1940 and was one of the most important French musical periodicals from the time between the wars. It contains testimonials and memories from numerous friends and collaborators. There are also many illustrations, such as Jean Cocteau's sketch of Diaghilev and Nijinsky, Picasso's etching of dancer Leonid Massine, and photographs of dancers, sets and scenes. In his conclusion' Editor Henry Prunieres writes, "For almost 20 years, the Ballets Russes provided us with new things in the realms of music, visual art, and choreography every year... One might say that all of musical and artistic life depended in large part on this extraordinary man." £250 (US $329).