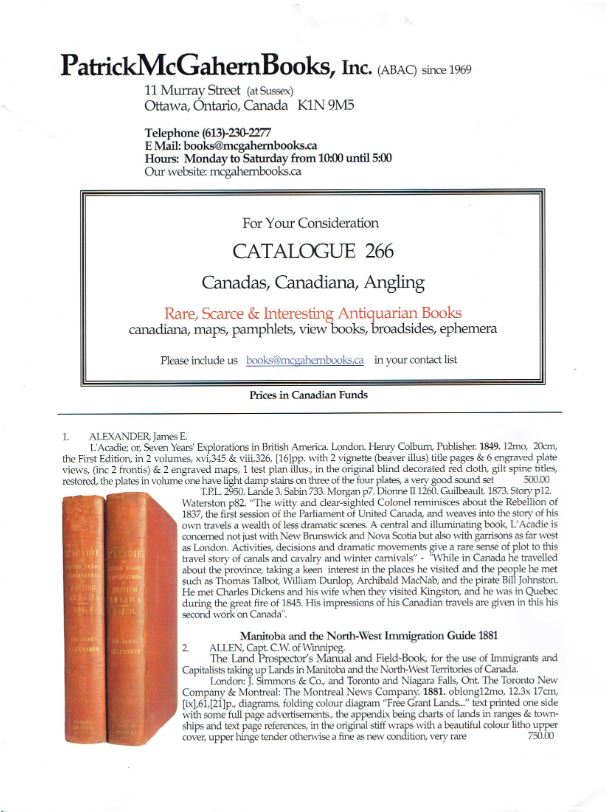 Patrick McGahern Books has published their Catalogue 266. Canadas, Canadiana, Angling. As usual, a few of these items manage to sneak across the American border. Where is ICE? Still, this is mostly a selection for those whose collecting interests lean to the north. Canada has much in common with the United States - a long, unsecured border, a common language (for the most part), and colonial background. Still, it is a different place. With a slightly larger land mass, Canada has barely over one-tenth the population of the U. S. It took longer to settle, is more rural, and has vast amounts of land similar to Alaska. There is much to Canada's history and culture that is uniquely Canadian, and you will find much that is distinctively Canadian in this catalogue. Here are a few selections.

This is one of those items that straddles the border. The fur trade in America was mostly run by two Canadian companies, the Hudson's Bay Company, and for a relatively brief time, the competitive North West Company. In these early times, the border between British Canada and the United States was undetermined in the West, so what is today the states of Oregon and Washington were considered by the British to be their territory prior to the Oregon Treaty of 1846. Item 13 consists of the accounts of two individuals who worked this territory on behalf of the North West Company in the early 19th century. Not edited and published until 1897, the title is New Light on the History of the Greater Northwest - The Manuscript Journals of Alexander Henry, Fur Trader of the Northwest Company, and of David Thompson, Official Geographer and Explorer of the same company 1799-1814. Henry kept an extensive set of diaries and notebooks but they were terribly disorganized. To piece it all together, Elliott Coues used Thompson's parallel journals to put it in order. The account comes in three volumes, volume 1 on the (Canadian) Red River, volume 2 the Saskatchewan and Columbia Rivers, volume 3 an index plus maps, including a facsimile of Thompson's exceptional manuscript map of the Canadian Northwest. Thompson was the first to travel the entire length of the Columbia River. Priced at CA $750 (Canadian dollars, or approximately $563 in U.S. dollars).

Item 17 is a sheet with a wood-engraved and hand-colored view taken from a photograph by the Canadian Illustrated News. It displays a march on May 15, 1872, in Hamilton, Ontario, in support of the Nine Hour Movement. This movement joined union and non-union labor, and spread to other cities in Ontario and Quebec. An estimated 1,500 people marched in the streets of Hamilton that day. Their demand was a nine-hour work day. Some jobs still had work days as long as 12 hours at the time. The movement attempted to join workers across the country, and it did help lead to the formation of the Canadian Labour Union and certain legislation. However, it was not successful in obtaining its specific goals and was over by the summer. It would not be until the 1880s that more serious labor agitation would bring greater power to Canadian workers. CA $75 (US $56).

Like its neighbor to the south, Canada also had a rebellion against its British masters. Unlike its neighbor's, it did not last long and was not successful. Item 6 is a Brief Sketch of the Life and Times of the Late Hon. Louis Joseph Papineau, by Thomas Storrow Brown. It was published in 1872, shortly after Papineau died. Louis Joseph Papineau was a legislator in Lower Canada, now Quebec. He was a reformer who grew more radical as British authorities resisted attempts at reform. At that time, the Canadian legislature had little power versus appointed British colonial authorities. In 1837, Papineau approved of the formation of the Sons of Liberty, a political group with a paramilitary wing. His son was one of the political leaders. It led to Papineau and others being cited for sedition. He went into hiding. Meanwhile, a similar uprising occurred in Upper Canada (Ontario). The two coordinated, but were quickly put down by the British. Papineau escaped to the United States and later went into exile in France. He returned in 1845 after an amnesty was declared, coming back to what was now a united Province of Canada. He briefly returned to politics but then retired. The author, Thomas Storrow Brown, also participated in the rebellion in Lower Canada, a member of the armed military side of the Sons of Liberty who participated in battle against British forces. He too escaped to the United States and returned to Canada in 1844 after the amnesty. CA $25 (US $18).

If you're looking to go on an excursion, the Canada Steamship Lines Limited has a great opportunity for you. At least they did in 1927, though I don't know whether they still offer one. Item 35 is a brochure announcing Niagara to the Sea. Toronto, Thousand Islands, Montreal, Quebec, Saguenay River. This one has the stamp of the Windsor Hotel, Montreal, so we know who gave it out. The Windsor was once Montreal's finest hotel, but suffered a couple of fires and closed in 1981. The brochure contains a centerfold map of "The All-Water Route" from Lake Superior to the sea. Non-Canadians may be wondering how those ships make it up and down Niagara Falls. Isn't that dangerous? The answer is a canal was built in the 19th century which connects Lake Erie to Lake Ontario avoiding the Niagara River. CA $65 (US $48).

Next we have Secrets of the Black Art. A Hand-Book of Magic, Puzzles, &c. For Parlour Entertainments. Published between 1880 and 1886, what this really is is a promotion for Lyman & Sons of Montreal, a wholesaler likely selling primarily to druggists. Some of their products may have been as magical as their games. All of the advertisements are for products offered by Lyman. Among them are Nonpareil Florida Water, Flavouring Extracts, Indelible Marking Ink, Universal Pain Reliever, Concentrated Extract of Coffee, Quinine Wine, Extracts of Sarsaparilla, Eliot's Dentifrice, Jacob's Rheumatic Liquid, and Worm Lozenges. That last one sounds particular appetizing. Item 10. CA $250 (US $187).