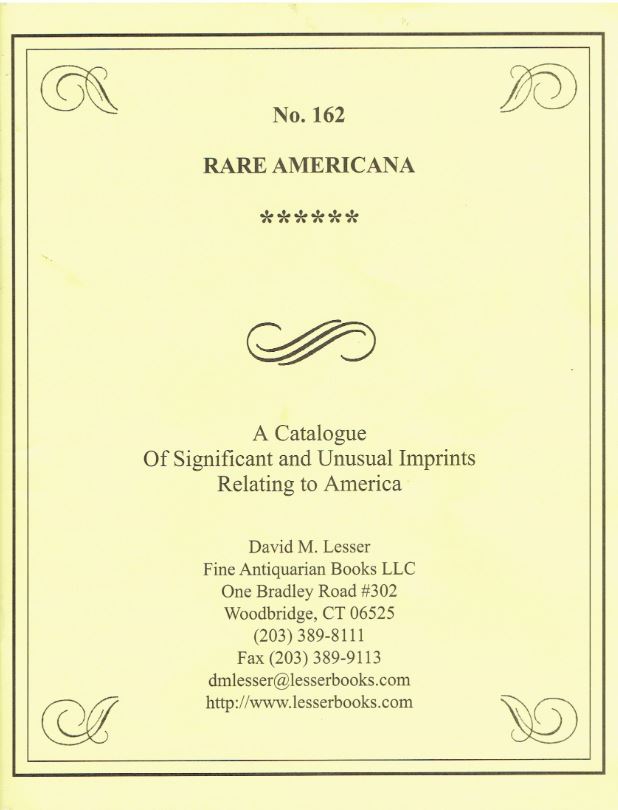 David M. Lesser Fine Antiquarian Books recently published their Catalogue 162 of Rare Americana. In an era that has seen many dealers cut back on printed catalogues, Lesser continues to use the printed word to market the printed word. There is a logic to that. This latest catalogue includes 156 items, books, pamphlets, manuscripts, broadsides, letters, cartoons, whatever you want on paper. These are a few selections.

You probably associate P. T. Barnum with circuses and freak shows, but not with serious causes. He had one in particular - temperance. Barnum came back from one of his European tours as a temperance advocate. He said that he saw so many men, even of wealth and high intellect, dissipated by alcohol that he became afraid it would get him too. He emptied his liquor bottles (on the ground) and became an advocate. For a while, when his financial fortunes were low, he went on the lecture circuit promoting temperance. Item 9 is Barnum's Appeal to the Democratic Electors of Conn., March, 1852, a large broadsheet. Barnum was a Democrat in his home state of Connecticut who "toiled for the Democratic Party faithfully and consistently ever since I became a freeman." However, he was displeased with Democratic politicians who opposed a law similar to one enacted in Maine authorizing the destruction of intoxicating liquors when in the hands of merchants. Two years later, he left the Democratic Party to join the newly formed Republicans. Barnum was also anti-slavery. He retained his interest in politics later on, serving as a state legislator in the 1860s, and Mayor of Bridgeport in the 1870s. Priced at $2,000.

What would a loving father from 1852 Mississippi give his son? How about some people. Item 91 consists of two deeds "of Gift" from Hiram Stewart to his son, Hampton Stewart, "in consideration of the natural love and affections we have." The gift was "a Negro girl named Hariet five years of age and a Negro boy named Evriet aged two years old." The second deed, for "ten dollars and the love, good will and affection for which I have for my beloved son Hampton S. Stewart...certain lot of Negro slaves." This "lot" consisted of four adults and four children. I'm not sure what the $10 was for, perhaps to make the transaction more legitimate in appearance as those slaves would have been worth hundreds if not thousands of dollars each at a slave sale. This document comes from 1859, meaning that Hampton did not get too much use from them, particularly the children, before Emancipation set them free. $500.

Item 86 is a copy of the last sermon given by Colonial America's most notable religious figure, Cotton Mather. His son, Samuel Mather, attested that this was "the last sermon my Father deliver'd from the Pulpit..." The title is The Comfortable Chambers, Opened and Visited, upon the Departure of that Aged and Faithful Servant of God, Mr. Peter Thacher, the Never to be Forgotten Pastor of Milton, who Made His Flight Thither, on December 17, 1727. Mather got it wrong about Thacher never being forgotten, but then again, he got it wrong about the alleged witches in Salem too. He wasn't perfect. This was Cotton Mather's last sermon as less than two months later, he too made his flight thither. First printed in 1728, this is a 1796 reprint which includes A Short Account of the Town of Milton. $250.

Item 1 is a manuscript indictment, with the verdict on the back, of a terrible legal decision from 1857. It was the last time a 12-year-old child was executed in America. Who knew there was a first time? It came in Alabama, and the child, not surprisingly, was a slave. He was 11, maybe even 10 at the time of the killing. Godfrey was watching four-year-old Lawrence Gomez. Godfrey was flying a kite, Lawrence tried to grab hold of the string, but in the process broke the kite. Godfrey took a hatchet and struck the younger boy, killing him. Godfrey claimed it was an Indian who did it, but there were no Indians around. The jury found Godfrey guilty, but recommended mercy considering Godfrey's age. The trial judge was uneasy with sentencing him to death, so left it up to the appellate court to determine whether an 11-year-old could be sentenced to death. The law at the time said it was presumed that someone 7-14 years old could not understand the nature and consequences of his actions sufficiently to have the necessary intention to murder someone, but if the jury found that the child did have the understanding, it could find him guilty. The law did say those under seven couldn't make those judgments, so you had to be at least seven to be executed in Alabama in 1857. Whew. The appellate court ruled that since the Judge explained the law correctly, and the jury found Godfrey guilty, he could be executed. Godfrey was hanged on July 16, 1858. $2,000.

Here's one for the conspiracy theorists out there. Before there was Alex Jones, there was Finis L. Bates. Item 10 is his 1907 book, The Escape and Suicide of John Wilkes Booth or the First True Account of Lincoln's Assassination Containing a Complete Confession by Booth Many Years After the Crime. Like Elvis or Billy the Kid, Booth disappeared into the night, to live a long life in disguise. Perhaps he was the mystery man on the grassy knoll. As Bates explains, "I became satisfied that John Wilkes Booth was not killed, as has been supposed, at the Garrett home in Virginia, on the 26th day of April, 1865, and present this volume of collated facts, which I submit for the correction of history, respecting the assassination of President Abraham Lincoln, and the death or escape of John Wilkes Booth." $175.

This is a clever item. It is a metamorphic mechanical cartoon card. It's one of those cards with a tab that when you pull it, the face on the card changes expressions. It was the work of David Claypool Johnston, who must have done several of these. This one displays the face of Jefferson Davis. Before you pull the tab, he is smiling. The caption says "After the Fall of Fort Sumter 1861." When you pull the tab, Davis' smile turns to a frown, his eyes bug wide open, and the caption changes to "After the Fall of Fort Sumter 1863." In 1861, the Union fort fell to Confederate forces. In 1863, it literally fell, reduced to rubble after a Union attack. Item 70. $500. Item 71 is a similar card, though from 15 years earlier. This one displays the face of Lewis Cass. Cass was the Democratic presidential nominee in 1848, who lost the election to Zachary Taylor. This card has a heading, A Locofoco Before and After the Late Election. The smiling Cass face is captioned "Hurra for Cass!" The frowning Cass caption reads "What! Old Zack Elected!" $450.