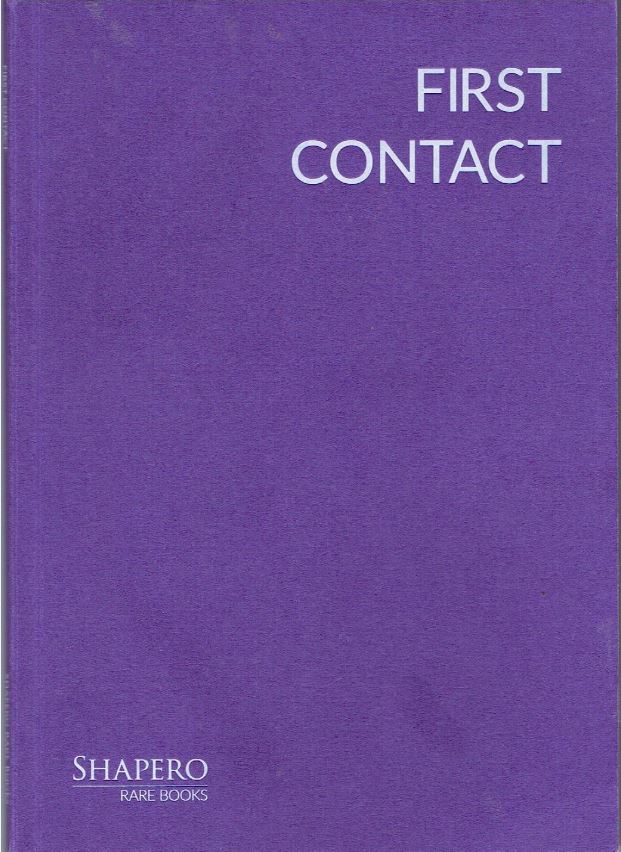 Shapero Rare Books has printed a compact catalogue of First Contact. Rather than Shapero's usual large and highly detailed catalogues, this twelvemo size selection contains photographs and only brief descriptions. However, it is filled with many of history's pioneering accounts of travel and exploration (hence the title First Contact). This is a handy guide to some of the most significant material in the field presently available at Shapero Rare Books. Here are a few of these selections.

The oldest item offered comes from 1483, at the dawn of the Age of Discovery. It is the first edition of Macrobius' In Somnium Scipionis Exposito to contain a world map. Macrobius was a Roman writer from the early fifth century. What is most interesting is the map, which depicts what was known of the world before Columbus, and even the somewhat earlier Portuguese explorers. Europe is rather narrow, Italy and England identifiable. The continent connects to Asia and goes as far east as India, marginally identifiable. Across the Mediterranean is a narrow band of land named Aphrica. Just below that is more open sea, followed by the antipodes, described as an unknown balancing land. The lower portion is labeled "frigida," a frigid place establishing that the bottom of the Earth, like the top, is cold. What we know today as Russia is also labeled "frigida." East Asia and the Western Hemisphere are unknown, and no speculation is offered. Priced at $140,000.

Here is someone who could have told us more about Asia in 1483... maybe. Tractato bellisimo... is a 1492 Florence edition of John Mandeville's travels. Mandeville was supposedly an English knight from the 14th century who visited Asia, Arabia, and parts of northeastern Africa. At least, that's what his account, which was circulated in numerous manuscripts before the age of printing, claimed. By the 1480s, his account became the most well-read travelogue printed, with numerous editions appearing. However, it is dubious whether Mandeville even existed. It seems more likely that he was a European who wrote his account based on what he learned from others. Certainly some of it is pure fantasy, but along with Marco Polo, Europeans did not have much else to go on for learning about the world outside of their limited horizons. $52,500.

Next we have one of the earlier and better collections of travels and voyages. The title is Delle navigationi et viaggi and its author was Giovannni Battista Ramusio. It contains three volumes. First published in the mid-16th century, these are volumes from 1613, 1606, and 1606. They were the last editions and thereby contain the most complete text. Volume 1 covers, Africa, volume 2 Asia, and volume 3 America. Ramusio's work is highly respected, with even John Locke describing it as the "most perfect work of that nature in any language whatsoever." $110,000.

William Broughton first traveled to the Northwest coast of North America with Vancouver in 1791. In 1795, he returned, in command of his own ship. He was to meet up with Vancouver, but was not successful. However, he spent four years exploring. Much of his time was spent around Japan and Russia on the other side of the Pacific, and Hawaii and various islands in between. However, it is his time along the North American coast that is most notable. He sailed along Alaska, visited Nootka Sound, and traveled up the Columbia River (earlier, with Vancouver, they explored the mouth of the river but did not go farther inland). It was Broughton's explorations along the Columbia that led to Britain's later claim to Oregon, eventually resolved by treaty with the United States. He also visited California, but received no more than a chilly reception from the Spanish. The title of Broughton's book is A Voyage of Discovery to the North Pacific Ocean... published in 1804, and it is not only one of the most notable of Pacific Northwest exploration books, but one of the rarest as well. $31,500.

This next book does not come from a ship's captain, but from a common seaman. It was a terrible trip, but Archibald Campbell tells us all about it. What's more, he gives us a very thorough look at Hawaii in the early 19th century. The book is titled A Voyage round the World; from 1806 to 1812, in which Japan, Kamschatka, the Aleutian Islands, and the Sandwich Islands, Were Visited, published in 1816. Those were the days when the British still called Hawaii the Sandwich Islands. The bad part came when their ship was wrecked off the coast of Alaska. The men were able to make it to shore, but the journey overland to the nearest settlement in Campbell's waterlogged and frozen boots resulted in severe frostbite. Both of Campbell's feet had to be amputated, along with a couple of fingers. He was sent to Hawaii to recuperate, where he stayed over a year. It gave him an opportunity to become very familiar with life there, resulting in a description that reads more like that of a resident than a visitor. On returning to England, Campbell could no longer sail, so he became an organ grinder on the streets. An editor heard of Campbell's plight, and listening to his story, decided to publish his tale to help him raise funds to pay for his needs. $9,000.