Science, Medicine and Natural History from Jonathan A. Hill Bookseller 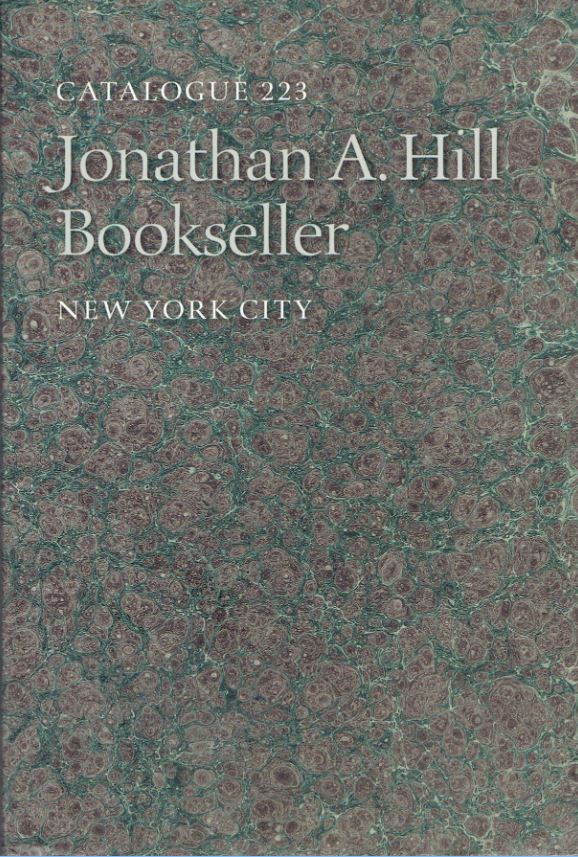 Jonathan A. Hill Bookseller has issued a catalogue of Science, Medicine & Natural History. There is much of interest to be found here, but do not rely on the science, and certainly don't blindly follow the medical advice. Most of this material is very old, dating as far back as the early 16th century. They didn't always get it right. Nonetheless, you can follow the evolution of these three subjects, along with visiting a few blind alleys along the way that did not pan out. Here are a few of the scientific, medical, and natural history works to be found in Hill's Catalogue 223.

There are only a handful of scientific discoveries on a par with this one. Dibner placed only three in this category, Newton's Principia, Darwin Origin of Species, and this book offered by Hill - De Revolutionibus Orbium Coelestium Libri VI... Published in 1543, this is Nicolaus Copernicus' theory of a heliocentric solar system, one where the planets revolve around the sun, rather than the sun, planets and stars revolving around the earth. The problem was that it both violated common sense (all you have to do is look up in the sky to see the sun revolves around the earth), and worse yet, it violated certain biblical passages. Copernicus' editor added that this isn't necessarily what actually happens, it is just a way of computing the movements of the heavenly bodies. This, and Copernicus dying only a year later, spared him the punishment of the Church Galileo later endured. Looking back, we now realize that Copernicus was right and this book is one of the most important science texts ever written. Item 26 is an exceptional copy of this monumental book. Priced at $2,000,000.

Actually, Copernicus was not the first to reach this conclusion. The theory was first raised 18 centuries earlier by Aristarchus of Samos. However, he was not taken all that seriously in his day, and in the following 18 centuries, he was ignored or forgotten. Aristarchus theorized that the sun was at the center of the solar system, that Earth and the other planets revolved around it. He also concluded that stars were suns, just at a much greater distance. Aristarchus also determined that the apparent motion of the bodies in the sky was the result of the Earth spinning on its axis. He attempted to determine the distance from the Earth to the sun, but substantially missed the mark on this one. However, his method was valid, even if his calculations were wrong. Item 5 is the first Federico Commandino Latin translation of this ancient work, De Magnitudinibus, et Distantis Solis, et Lunae... published in 1572. $37,500.

What better way is there to understand those planets and stars then by observing them through a telescope? This was the best of its time. It almost reached all the way to the stars. William Herschel's telescope was 40 feet long and five feet in diameter. It took four years to build this monster, which Herschel dedicated to King George III. King George lost America, but his telescope, with Herschel's assistance, managed to find two new moons of Saturn. Item 44 is an offprint of the article from Philosophical Transactions, entitled Description of a Forty-Feet Reflecting Telescope, published in 1795. The plates illustrate all of the telescope's parts, along with detailed cross-sections and schematics. Unfortunately, the giant telescope proved difficult to maintain and use efficiently, so its practical use was limited. $9,500.

Next we have a remarkable scientist though not all that well known. Geminiano Montanari was a 17th century Italian astronomer who was an early promoter of the experimental method in science. He corresponded with some of the better known leading lights of the age, including Newton and Halley. Montanari also was a professor of mathematics and wrote about economics. This book was an attack on a popular non-science of the time, still followed by many today, astrology. Using the experimental method, he found its teachings to be false. He even once prepared an astrological almanac using random predictions to show that these would be true just as often as astrological ones. His book on astrology is titled L'Astrologio convinta di Falso col mezzo di nuove esperienze... It was published in 1685. Item 73. $2,950.

Item 54 is a large, panoramic photograph of the Krupp Steel Works in Essen, Germany. The Krupp family already had been in the manufacturing business for centuries when this picture was taken in the early 1870s. However, in the second half of the century, it expanded greatly. There would be 20,000 workers in Essen alone, in what became a company town. Armaments were their main business. As the panorama shows, it was practically a city of its own. The panorama is approximately eight feet long, made up from six prints joined together. This copy comes from the library of Chancellor Otto von Bismarck, and almost certainly was presented to him by Krupp. $45,000.

Here is a book Hill describes as "one of the true marvels of nineteenth-century technology in the service of the 'Book Arts,' and must be seen to be fully appreciated." It is neither a printed nor manuscript book. It is woven. It is a French prayer book, titled Livres de prieres tissé d'apres les enluminures. It was created in Lyon 1886-1888. It was composed from silver-grey and black thread, tightly woven together. The thread is very fine, almost microscopic. This is not something you would want to fashion by hand. It would be impossible. Rather, it was created by a loom, but again, not hand operated. Rather, it used a very early "computer," using a punch card system. The number required for the detail was enormous. The exact quantity is unknown, but estimates range from 106,000 to 500,000 punch cards. After 50 unsuccessful attempts, they finally figured out how to weave the book. It took two years to produce 60 copies. It is likely the only book ever woven. $35,000.