A Variety of Books, Paper, and Ephemera from Samuel Gedge Ltd. 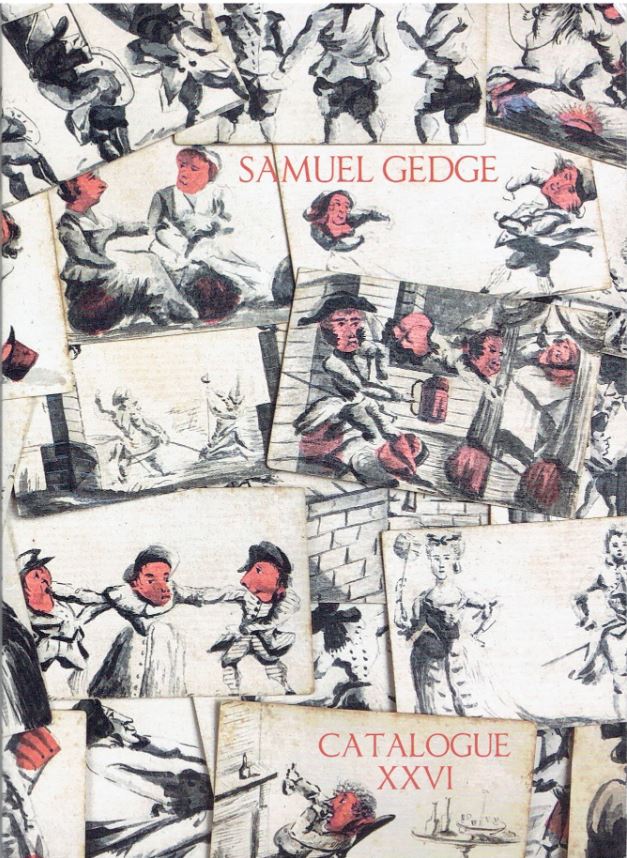 Samuel Gedge Ltd. has released their Catalogue XXVI. Gedge provides us with a variety of material, some books, but many shorter form and ephemeral paper items. A few aren't even paper. It is old, generally 17th-19th centuries. The origins are primarily England and continental Europe. Most of what you see you won't find elsewhere, either because it is very rare or one of a kind. Here are a few examples from their latest selection.

We will start with an archive of letters from the late 18th and early 19th century from a pair of uncles, written to their niece and great-nephew. There are 53 signed letters from Thomas Martyn to his niece Elizabeth Wade, 48 to his great-nephew Ellis Wade, and 30 from William Elliston to his niece. Dates range from 1791-1825. They stop in 1825, the year Martyn died (Elliston died earlier). They cover much territory over their long period of time, including family news, current events, and college advice for the great-nephew. Both of the uncles were reverends. There is a particularly interesting comment by Elliston concerning the French Revolution in early 1793. There was always much opposition to it in England, but by early 1793, the opposition went from plain old pro-monarchism to justifiable horror. Elliston writes, "You have heard the report, which is too true, that the king of France is condemned to die. Horrid proceedings - the trial was destitute of every thing that goes to constitute a fair and just one. The opinion of Tom Paine, it is remarkable, was the most favourable in the whole convention. How may we exalt as Englishmen, when one of the greatest rascals of our country, proves to be one of the worthiest, or rather the least demerit of all the French representatives..." Paine barely escaped the guillotine, such was his relative moderation. Item 43. Priced at £3,500 (British pounds, or approximately $4,674 in U.S. currency).

This next, ephemeral item traces to someone who did not survive the French Revolution. The Marquis de Mandat was a leader in the National Guard, popular with the people as a supporter of more liberal ideas, while still loyal to the King. He supported a constitutional monarchy. However, as the revolution became increasingly radical, there was no room for supporters of the King, and Mandat was extremely loyal. When Lafayette was forced out as commander of the National Guard, Mandat was selected to replace him. However, it would be his final position, as Mandat was assassinated on August 10, 1792. Item 36 is his wallet, gilt-stamped with his name, Mr. Mandat Colonel d'Infanterie Rue Chapon No. 3. A single 100 franc assignat (the currency used in revolutionary France) is inside. £1,950 (US $2,603).

Gedge does not offer many items from America, but here is an exception. It is not a "pleasant" one. The poster announces 25 Dollars Reward. The reward, it says, "will be paid for the apprehension of the negroe girl Cecilia, alias Pleasant, about 23 years old - she is of common size, good Cooking and rather stoutly built." She had recently been purchased by Otatcher Gravier when she absconded. The reward would be given to anyone who arrested her, held her in the local jail, and notified the owner's representatives. This notice was published in New Orleans circa 1850. Item 114. £4,500 (US $6,008).

Next we have a letter that goes back to a time when geologic processes and the age of the Earth were not well understood. It is a letter from Cardinal Francesco Carrera, a bibliophile and antiquary along with his church role, to a fellow antiquary and collector, Gian Giacomo Dionisi, on May 5, 1787. Carrera writes that he is putting together some gifts for Pope Pius VI which he hopes Dionisi will deliver to him. Among them is a pair of specimens of fossilized fish. Carrera suggests they could be displayed at the Vatican as proof of the biblical flood. The letter also discusses other matters, such as a complete set of the works of Palladio that is being held at a library for him. Item 67. £750 (US $1,002).

Here is a broadside dating back to the time when it was acceptable to gawk at people because they were different. They were put on display. It announces, Mr. Simmet...is now exhibiting Three of the Greatest Wonders of the present age...The Celebrated Miss Franciss, The Young Lincolnshire Giantess, Only Fifteen years of Age, and stands near 7 Feet High. The broadside goes on to claim, "She is the Tallest and Largest Lady in the world." But, as they say, that is not all. The other two wonders of the age are "...the Smallest Ladies in the World, The Surprising Sisters, the Norfolk Dwarfs." Those were Miss Ann Hurry, 21 years old, standing only 30 inches tall, and her even more diminutive sister, Miss Maria Hurry, only 26 inches tall and a mere 18 pounds in weight. One suspects there was some exaggeration in Mr. Simmet's claim as nothing about these three ladies shows up in an internet search, but once you buy your ticket, you don't get a refund. Item 24. £650 (US $869).

Next we have a handbill promoting another giant, but this one is downright creepy. It is headed, A Most Wonderful Rat, The Greatest Natural Curiosity Ever Seen in London. A Gigantic Female Rat. It goes on to explain, "Taken Near Somerset House, it is truly worthy of Inspection of the Curious, its Length being Three Feet Three Inches, and its Weight Ten Pounds Three Quarters, and Twenty-four Inches in Circumference." Any person who purchased goods in the amount of one shilling or more at 5 Sweeting's Alley, Cornhill, was entitled to see it free of charge. Now, I know the perpetrator of this offer was lying. First, a 3-foot long, 10 pound rat is not "wonderful." It is a creature from your worst nightmares. Secondly, such things (thankfully) do not exist. It was likely some other animal, perhaps an opossum, they were pawning off as a giant rat. Item 27. £450 (US $601).