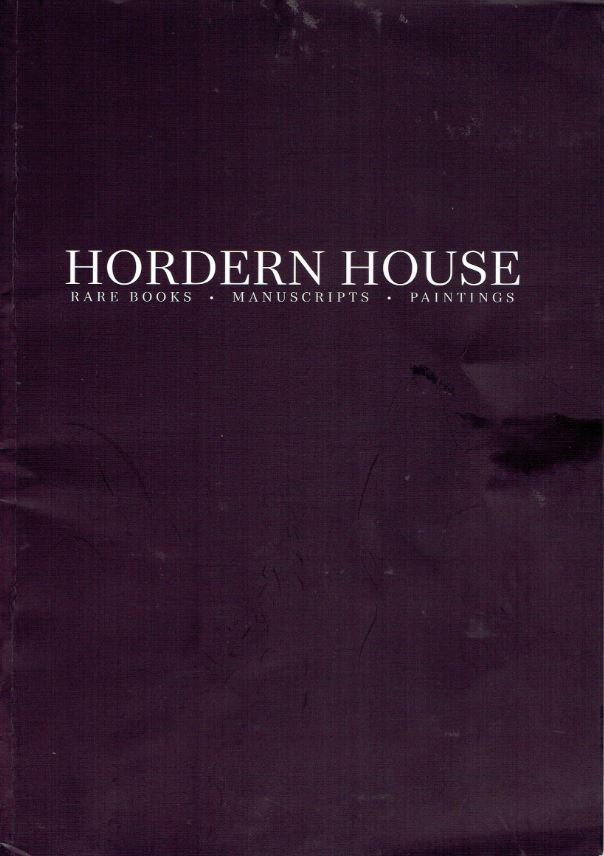 Hordern House has released a new, though untitled catalogue. In place of the missing title, we will quote from their introduction as it describes the sort of material you will find: we "specialise in rare and important original materials relating to Australia and the Pacific over the period of European discovery, exploration, and settlement." That clearly covers collectors of both Australia and Europe. As for America, there isn't much related to 49 of the states, but Hordern House carries much that will be of interest to collectors of the 50th state - Hawaii. That is covered in the "Pacific" part of the description, as several of the early voyages of discovery that made it to Australia also visited the Hawaiian Islands. Here are a few selections from this latest Hordern House catalogue.

We begin with a startling very early map, startling, perhaps, for what is found in the South Pacific, and fascinating for its look at the Americas. It was created by Benedictus Arias Montanus for Plantin's polyglot bible. It is a double-hemisphere world map published in 1571. This was over 30 years before the first Dutch discoveries in the area of "New Holland." Where Australia is located on the map is a land mass that strangely protrudes from the sea. Was it an island? Australia? Land connected somehow to the imagined massive southern continent? It is unclear, but opens the possibility that some European had seen or learned of the existence of Australia earlier than is known today. Americans will also find this map fascinating for its depiction of North America. The east coast and Gulf of Mexico were reasonably familiar by then, but the heartland and west coast essentially unknown. Indeed, the west coast extends and connects to Asia, the land bridge still present some 10,000 years after it is believed to have disappeared. The middle of the continent does not drain into the Mississippi and then on to the Gulf of Mexico. There is no Mississippi. Rather, most of the continent drains into two rivers that empty into the Gulf of California. Item 1. Priced at AU 19,850 (Australian dollars, or approximately $15,056 in U.S. dollars).

Here is a Hawaiian item, though it came from across the sea. It is a hand-colored lithograph of Their Majesties King Rheo Rhio, Queen Tamehamala, Madame Poki of the Sandwich Islands and Suite, as they appeared at the Theatre Royal Drury Lane, June 4th 1824. They are better known as King Kamehameha II and Queen Kamamalu, while Madame Poki would be the wife of the Royal Governor of Oahu, Boki. The King had decided he wanted to visit England, hired a ship, and took off on his adventure in 1824. It was a fatal decision. He was well-received in England, an instant celebrity, and the party evidently was having a great time. They attended the opera and the theater (as here) while becoming a great center of attention. What they weren't prepared for was the measles. They had no immunity. They never made it home. The Queen died on July 8, the King six days later. Item 20. AU $5,000 (US $3,796).

As that description attests, Hawaii was then known as the Sandwich Islands. It had nothing to do with their culinary customs. The islands, like the concoction of placing something between two slices of bread, was named for John Montagu, the Fourth Earl of Sandwich. Lord Sandwich had the islands named for him by Capt. Cook, whose third voyage he sponsored. He got the something-between-two-slices-of-bread thing named after him as he was the inventor. Sure, Edison and Bell are great inventors who have had an enormous impact on our lives, but any more so than the Earl of Sandwich? Here is a memory of his life that is not placed between two slices of bread. Rather, it is a folded and addressed sheet of paper from the Earl sent to John Hawkesworth, who was the editor/writer of the account of Cook's first voyage. The Earl humorously requests, "That I may be certain whether you are alive or dead, I shall be obliged to you if you will either come yourself or send your ghost to dine with me tomorrow. I am most sincerely yours Sandwich." It is dated "Thursday morning" (circa 1771). Item 11. AU $7,850 (US $5,959).

Of all the books relating to Cook's three voyages, this is the most beautiful. The reason is it is devoted to images, being the only color-plate book to come from Cook's explorations. The title is View in the South Seas... John Webber (identified as "James" on the title page) was the artist. He was the official artist on the third voyage. The beauty of the scenes Webber created helped spark the image of the South Sea islands as some sort of paradise. Cook's third voyage returned home in 1779, but Webber's book did not come out until many years later. It includes 16 color plates and 15 pages of text. It is dated 1808, but this likely was published in 1819-1820. It appears the text pages were printed at the beginning, but the expensive, hand-colored plates were produced as needed over the following years. Item 13. AU $64,500 (US $49,107).

Here is another magnificent hand-colored work, Sketches Illustrative of the Native Inhabitants and Islands of New Zealand. This is the work of Augustus Earle. Earle produced his book in 1838, not long after returning from his voyage on the Beagle, the same ship on which Charles Darwin was the naturalist, and from which he developed his theory of evolution. At the time this book was published, the British were promoting settlement of New Zealand, so it fit right in with the plan. This book is very rare, not surprising as the handwork needed to color it would have limited it to a short print run. Item 16. AU $125,000 (US $95,164).

Next we have The Malay Archipelago... another book of discovery, but of a very different sort. The author was Alfred Russel Wallace, a naturalist who spent eight years traveling an area that now encompasses Malaysia, Singapore, and Indonesia. Published in 1869, this is a wonderful account of what he found. However, it is not what he saw that made Wallace such an important figure. It is what he concluded that is significant. Returning to England in the 1850s, he wrote to fellow naturalist Charles Darwin about his conclusions. At that point, Darwin had developed his theory of evolution privately, but did not reveal it for fear of the animosity such a sacrilegious claim would generate. Wallace was not so cautious, revealing his theory of evolution to Darwin, unbeknownst to him that Darwin had reached the same conclusion. They each developed the theory of evolution independently. Darwin realized he had to reveal his thoughts or be left behind. The result was that Darwin and Wallace published a paper together describing their theory prior to Darwin publishing his famous book on the origin of species. Wallace never showed any signs of resentment toward Darwin for taking the credit. This book was dedicated by Wallace to "Charles Darwin, author of "The Origin of Species"... to express my deep admiration for his Genius and his Works." Wallace became one of Darwin's greatest public defenders. Item 43. AU $12,400 (US $9,441).