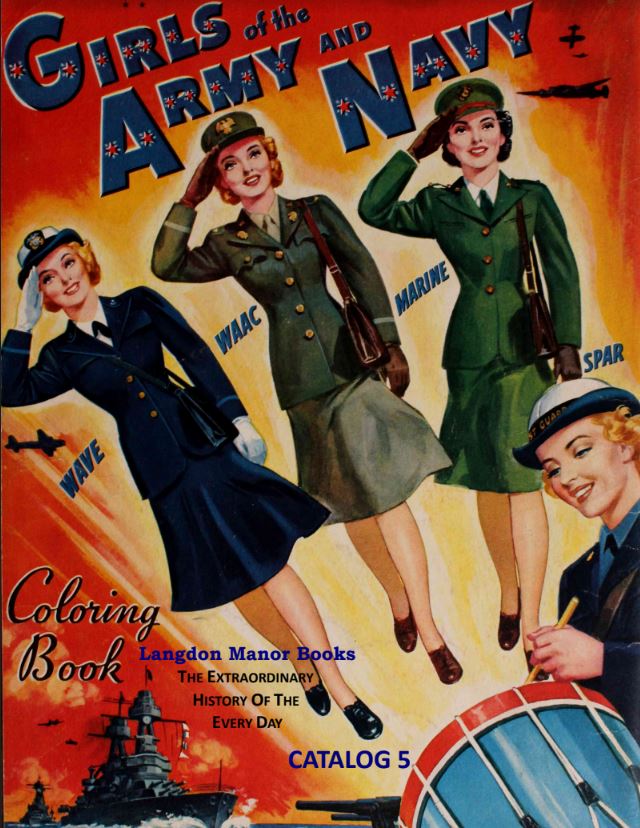 Langdon Manor Books has published their Catalog 5. They describe their specialties as American social movements, American personal narratives, photo albums and outsider books. In this catalogue, the specific categories listed are Women, LGBTQ, Japanese Americans, and American Internment Camps. We can add to that one large archive relating to Native Americans will be found in this collection. Here are a few samples of what is in store.

Despite the terrible treatment they endured, Japanese Americans from the west coast managed to maintain a surprisingly positive attitude through the Second World War. Despite their overwhelming loyalty, they were moved inland from the west coast to internment camps for fear they would somehow help Japan attack the Pacific coast. Americans ethnically descended from America's European enemies were not so treated. Item 7 consists of 42 issues of Pacific Citizen, 41 published by the Japanese American Citizens League from the non-Pacific location of Salt Lake City from 1942-1946. However, these were not published from an internment camp. It had been published in San Francisco, but on 48-hour notice in 1942, the JACL moved the publication and editors Larry and Guyo Tajiri to Salt Lake City, before voluntary relocation by Japanese was replaced by forced internment. The newspapers provided news from the internment camps, but also stories of Japanese Americans who were fighting for their country, information concerning civil rights, and other stories showing Japanese Americans in a positive light. One contains a copy of a Superman comic headed "Superman is Now Backing Loyal Japanese Americans." It is somewhat ironic since the displayed frames came at the end of a comic where Superman is fighting disloyal Japanese Americans, but at the end, the Man of Steel tells his readers, "It should be remembered that most Japanese Americans are loyal citizens. Many are in combat units of our armed forces, and others are working in war factories. According to government statements, not one act of sabotage was perpetrated in Hawaii or territorial U.S. by a Japanese American." Item 7. Priced at $750.

Here is another example of optimism under adversity. It is a copy of Ramblings, the high school yearbook for the Topaz Relocation Center from 1944. Topaz is located in the barren desert wilderness outside of Delta, Utah, blazing hot in summer, bitterly cold in the winter winds. Its footprint is not very large, but it was Utah's fifth largest "city" during the war, housing around 8,300 people. There is a sign marking the spot today; otherwise no more than scattered rubble remains. Langdon Manor notes that residents in housing units of 250-300 shared 4 showers and 4 bathtubs. They were given cots and mattresses, furniture was built from scrap wood. Still, they were optimistic, principled, and could look at their situation without losing a sense of humor. Speaking of their athletic teams, which were allowed to play other schools in the area, they write that they play with a purpose, "to demonstrate our worth as American youth." And then, they turn to humor, noting, "due to poor weather conditions and lack of facilities, including a track field, the track season for Topaz cindermen was very short. Incidentally, who ever heard of a track team without a track, pole vault pit, high jump pit, and who used chairs for hurdles?" Item 10. $3,250.

The Episcopal Church deserves much credit for its progressive and welcoming attitude toward gays and others in the LGBTQ coalition. In a world where many churches still today treat these people as if they were participants in some sort of crime, all the way back in 1976 the Episcopal Church declared "homosexual persons are children of God who have a full and equal claim with all other persons upon the love, acceptance, and pastoral concern and care of the Church." In the days since, the church has consecrated an openly gay bishop, prohibited discrimination against transgender individuals, and opened the rite of marriage to all couples. Item 24 consists of two faux leather binders from 1976-1977 relating to the church's task force on homosexuality. This set evidently came from the Ohio diocese. It includes various documents, some quite surprising for the era. For example, a Report of the Committee on Human Sexuality declares that individuals cannot control their orientation and so homosexuality should not be considered sinful. Even today, some high ranking church and political figures think it is acceptable to subject homosexual children to brutal "conversion therapy," as if this were a choice. That is not to say support of this attitude was universal in the 1970s, as while the reports are very progressive, the Ohio Bishop's letter is one of dismay. He attributes the reports to politics and pressure and claims, "My mail, and that of every bishop I know, on this matter can only be described as an outpouring of outrage." Perhaps he was missing something in terms of the source of moral principles, that maybe it is something other than the level of popular support? $1,750.

Item 40 is a sketch and sentiment book (in a "Jenny Lind Album") by a woman on the frontier with some notable family connections. Helen Louisa Lynde Dent filled this album with sketches and thoughts, though it is not clear whether she did any of the drawings. At least some can be traced to her husband, Frederick Dent. Louisa was born into a military family, so she moved around quite a bit, from Wisconsin to Michigan, Oklahoma, and Texas before marrying Frederick. They would then move on to Oregon and Washington. The couple likely met in West Texas while their fathers were stationed there. Fred was educated at West Point and a close friend was Ulysses S. Grant. It was while visiting Fred that Grant met his sister, Julia. They married. Fred served as Grant's military secretary and retired as a general. The album includes at least 11 images of Native Americans, seven of military men. The Native Americans are named and captioned. Some of them have few if any other pictures extent. At least two were drawn by Fred as they are signed "Fred" and "FTD." The Dents standing would have given them access to draw pictures of both soldiers and Indians. By the way, a "Jenny Lind Album" came with blank pages, intended to be used as albums and scrapbooks. Their name honored the great Swedish singer who toured America in 1850-52. $25,000.

This is a remnant from an early women's rights in the workplace movement. Item 29 is a three-ring binder containing 12 issues of Stewardesses for Women's Rights from 1973-1975. Back then, they were called "stewardesses," not flight attendants, the feminine form being appropriate as virtually all were women. Not just women, but invariably young, thin, and beautiful women. Presumably, they knew a thing or two about safety, but an older woman with much more experience would be replaced by a younger one when the time came. To look at this policy from a more positive standpoint, as long as your flight didn't experience any safety issues, it wasn't a problem. The SFWR was founded in 1972 after a lawsuit against Eastern Airlines contesting its weight and grooming regulations. $625.