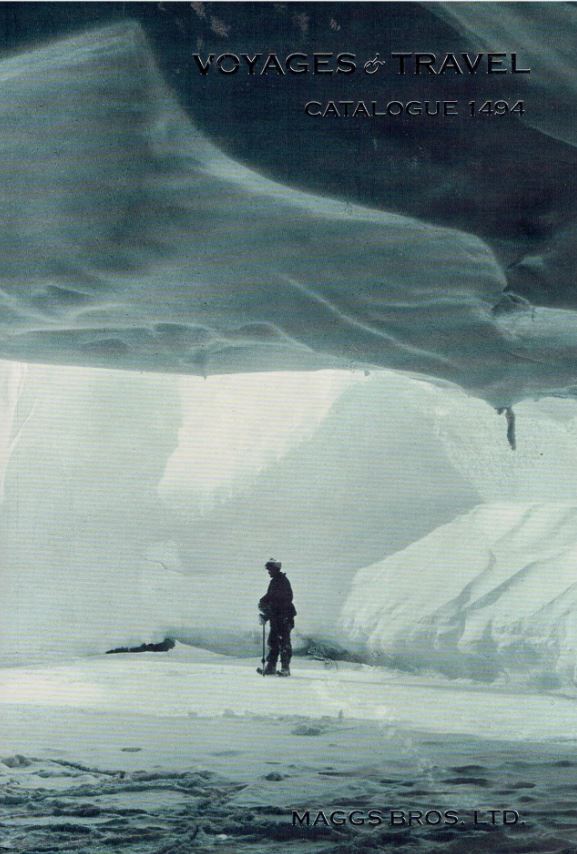 Maggs Bros. Ltd. has issued their Catalogue 1494 Voyages & Travel. Many of the journeys were those of discovery, famed explorers off to discover the world. Others were travels by individuals who could afford to do some amateur exploring on their own. Some trips had more practical purposes, such as political or religious missions. Then, of course, some involved the scourge of war. Maggs has divided the catalogue into sections based on the destination. Here they are: Africa; Egypt, the Near East & Middle East; Europe, Russia, Turkey; India, Central Asia & the Far East; Australia & the Pacific; Central & South America; North America; and Alaska & the Poles. Here are a few selections.

James P. Bryer is one of those obscure individuals who traveled for war. He was an American, from Indiana, who enlisted in 1846 to fight in the Mexican War. He was sent off to Texas to serve with Zachary Taylor's forces. Item 89 is an eight-page letter Bryer wrote on February 17, 1847. The American Army had built Fort Brown along the banks of the Rio Grande, today Brownsville, across the river from Matamoros. It was an intentional provocation by President Polk, who was looking for an excuse to seize Mexican land as part of his vision of Manifest Destiny. The U.S. claimed the Rio Grande as the border, but Mexico said the border was the Nueces River, farther north. In other words, according to Mexico, Taylor was already occupying Mexican land. For the most part, Bryer was pleased with the accommodations. He writes that they have "good, dry houses and good bunks to sleep on and we would be very comfortable if it were not for the fleas..." They did have a recent scare, though so far they had had no serious engagements. The men were awaken by the sentinel firing his rifle. They jumped out of bed and waited for more, but there were no more shots. They were told the sentinel saw a couple of men approaching and when they ignored an order to stop, he fired. They ran off. Bryer continues, "It has been reported that there are several thousand Mexican Cavalry in the neighborhood of this place but I don't believe that report is true." Bryer survived the war and became a journalist after returning home to Indiana. Priced at £1,750 (British pounds, or approximately $2,341 in U.S. dollars).

Here is another war related item, though not one written by a soldier. It is an anonymously created Geographical and Historical of the Principal Objects of the Present War, published in 1741. The text and two maps are focused on the Caribbean; the war was the bizarre War of Jenkin's Ear. For some unclear reason, the Spanish had boarded a British ship, as permitted by treaty, but sliced off the ear of its captain, Robert Jenkins. It didn't take much of an excuse in those days for the British to go to war with the Spanish or French. It describes various ports, including Cartagena, Portobello, Veracruz, Havana, and St. Augustine. It also shows the routes taken by Spanish treasure ships, and it is not hard to imagine why the British wanted to know those. The overview is clear as to the book's purpose, stating that it is designed not only to provide an account of the area, "...but also to shew the Possibility of their being subdued, and the manner in which they may be taken, by giving an Account of their Strength, and the several Sieges they have from time to time undergone." Item 76. £2,750 (US $3,686).

This item involves short travel on a river, though certainly not a voyage. It celebrates a rare event that never occurs any more. It is a round token of The Lord's Prayer, with the prayer printed in micrographic text. The token further says, "Printed on the THAMES, during the Frost Feby 5th 1814." This was the last of the Frost Fairs. On those rare occasions when the winter was so cold the Thamas froze solid, there would be a fair held on the ice. They went back to the 17th century, but after 1814, there were no more. Today the river never freezes, a consequence of climate change and faster river flow caused by the placement of bridges. Item 30. £750 (US $1,005).

Item 53 is Souvenirs de Formose et des Iles Pescadores. Octobre-Novembre 1896, by Claude Rarecourt de la Vallée Pimodan. This sounds French. Actually, it is a first and only edition of an account of a visit to Taiwan (or Formosa) and the Pescadore Islands in the Taiwan Strait in 1896 by a delegation of five Japanese officers. The territory had just been ceded to Japan at the conclusion of the First Sino-Japanese War. So why on earth is this book written in French? The answer is the five Japanese officers were accompanied by French military attaché Claude Pimodan, the author. The French had briefly occupied Taiwan and the Islands after the Sino-French War in 1885. The book documents a trip through Taiwan and to the Pescadores, and contains 26 photographic plates, likely taken by the delegation. The pictures from the Pescadores would have been particularly interesting to the French as those document the French presence. This book is very rare as it was not offered for sale, most likely meant only for French officers. £3,500 (US $4,691).

This next item is far more recent than the others, but it is significant to understanding even more recent American history. Item 15 is The Truth About Kuwait, published by the Iraqi Ministry of Foreign Affairs in 1961. That was the year the British protectorate ended and Kuwait became an independent state. Iraq claimed that this was just a continuation of British influence, and historically, Kuwait should be controlled by Iraq. Kuwait's great oil wealth undoubtedly was an influence on this opinion. Iraq threatened invasion, but were deterred when the Arab League promised to provide military support to Kuwait. This history helps to explain why three decades later, Saddam Hussein believed he had the right to invade Kuwait, an action that quickly led to a confrontation with the United States and the Gulf War. £1,000 (US $1,340).