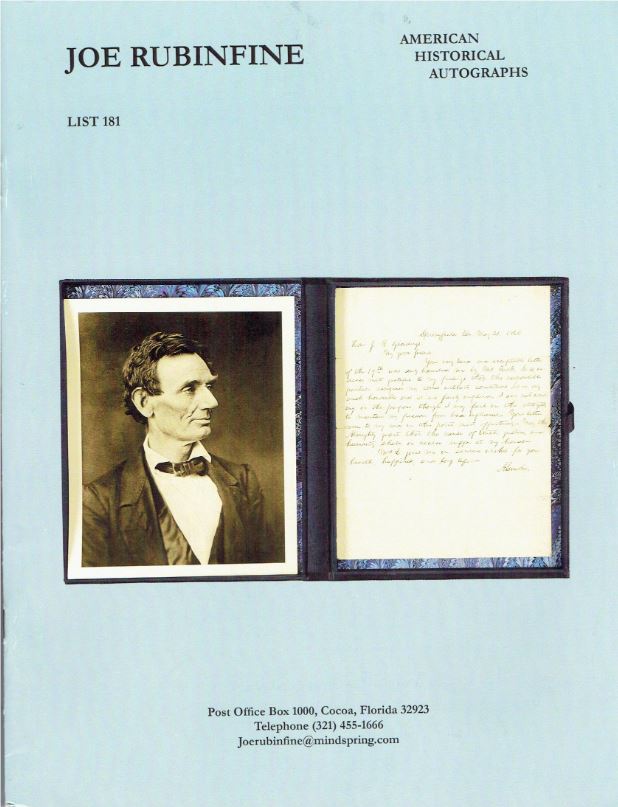 Joe Rubinfine has issued List 181 of American Historical Autographs. The collection includes Americans from many walks of life, most of whose names you will recognize. The greatest concentration is in the field of politics, presidents in particular. Here you will find a range, as Rubinfine offers signed material from Washington and Lincoln, along with Tyler and Buchanan. There are also the near-greats and the ordinary in between. We also find many Americans who made their mark in the military, along with some items specifically related to the American Revolution. These are a few of the signed documents you will find.

We begin with an item that, frankly, is out of reach of most collectors, but is worth mentioning for its significance. It is a letter Abraham Lincoln wrote to abolitionist Congressman J. R. Giddings of Ohio on May 21, 1860. He had only learned a few days earlier that he had been nominated for the presidency by the Republican Party. May 21 was also the day that Lincoln wrote his formal acceptance of the nomination. Giddings had written his congratulations and perhaps somewhat naively said that Lincoln had won because of his honesty and independence from corrupt politicians. Perhaps, but his campaign managers did some backroom dealing to assist their absentee candidate. Lincoln writes back that he is grateful his nomination comes without strings attached. "I am not wanting in the purpose," he says, "though I may fail in the strength, to maintain my freedom from bad influences. Your letter comes to my aid in this point, most opportunely. May the Almighty grant that the cause of truth, justice, and humanity shall in no wise suffer at my hands." Item 26. Priced at $475,000.

This next item is Lincoln related, though not by much. It is more interesting for its author, General Daniel Sickles. Sickles was a congressman from New York, later a general for the Union during the Civil War. He lost a leg at Gettysburg when his men were routed. He disobeyed orders and they all paid the price. Sickles blamed his boss, Gen. George Meade. His leg made it to Walter Reed Hospital where it was put on display. Sickles visited it annually. However, none of this is what he is best remembered for. His greatest celebrity came before the war, when he discovered that his young wife was having an affair with the son of Francis Scott Key, author of the Star Spangled Banner. He was enraged. Sickles shot and killed the younger Key. At his trial, Sickles was acquitted. It was the first successful use of the defense of temporary insanity. Perhaps Sickles should not have been so enraged, as he had carried out an affair with a prostitute himself. There is one more thing to note about Sickles - he and his young wife were good friends of the Lincolns, particularly Mrs. Lincoln. When the injured Sickles returned to Washington, leg in hand so to speak, the President visited him. Years later, 1912 to be specific, the aged Sickles, probably in his 90s, though his claimed birth from the date he married his teenage wife would have made him late 80s, was promoting a memorial to Mrs. Lincoln. This letter was sent to Socialist leader Francis Tandy, requesting his mailing list to send a booklet promoting the Mary Todd Lincoln Memorial. Sickles hoped to raise $150,000 for a memorial to Mrs. Lincoln in her hometown of Lexington, Kentucky, to be placed on the campus of Sayre College (now Sayre School, no longer a college). For whatever reason, it didn't work out and there is no Mary Todd Lincoln Memorial in Lexington, though you can visit her childhood home there, which is now a museum. Item 45. $500.

This is not the typical Rubinfine item. It is something printed, rather than handwritten. It is a first edition sheet music for I Wish I Was In Dixie's Land. The songwriter was Dan D. Emmett, and his song is now known simply as "Dixie." Less known is that its writer was not from Dixie, but from Ohio. Even more surprising, "Dixie" was not a name for the South prior to the writing of this song in 1859 (the sheet music was first published in 1860). The origin of the term is unknown, some thinking it was the name of an earlier New York slave owner, others that it referred to the Mason-Dixon Line. Whatever the source, it quickly turned into a nickname for the South, and Emmett's song became the unofficial anthem of the Confederacy. Item 22. $1,500.

Here is another letter of historical significance. It was written by George Washington on June 8, 1788, and sent to "William Smith Esqr and the other Gentlemen Proprietors of the Ship Federalist." Smith was a Baltimore merchant who had served in the Continental Congress, and would later serve in the U.S. Congress. The Federalist was a small ship, a 15-foot long model built to scale. It was a gift to Washington, for which he was very grateful. However, that is not what makes this letter significant. This was the time when the states were considering the newly written constitution, and while Washington officially was neutral, he was behind the scenes a strong supporter of its adoption. Smith's home state of Maryland had approved of the new Constitution, but Virginia had not yet so voted. Washington writes that he is confident that Maryland's decision can't help but be on the mind of Virginia's convention. "I cannot entertain an idea that the voice of the Convention of this State, which is now in Session, will be dissonant from that of her nearly-allied Sister, who is only separated by the Potomack," writes Washington. The Constitution withstood the winds of opposition to be ratified, but the Federalist could not withstand the winds of a hurricane a few weeks later. She sank. Item 53. $150,000.

Item 44 is a letter from Civil War General William T. Sherman to his younger brother Hoyt, an Iowa banker, in 1885. Hoyt had requested his brother send him some sort of signed document for the state librarian. William was suspicious of the librarian's motives, as he was regularly besieged for autographs, but wished to comply with his brother's request. He produces an original, handwritten report from July 28, 1863, written 20 miles from Vicksburg, but he makes it clear this is to be given only to the library itself. Writes Gen. Sherman, "Please see your Librarian in person, and if he will file this paper with the State Archives you may deliver it to him absolutely, but if he means to use his office to get an autograph letter, you can keep it yourself or send it back to me..." $1,500.