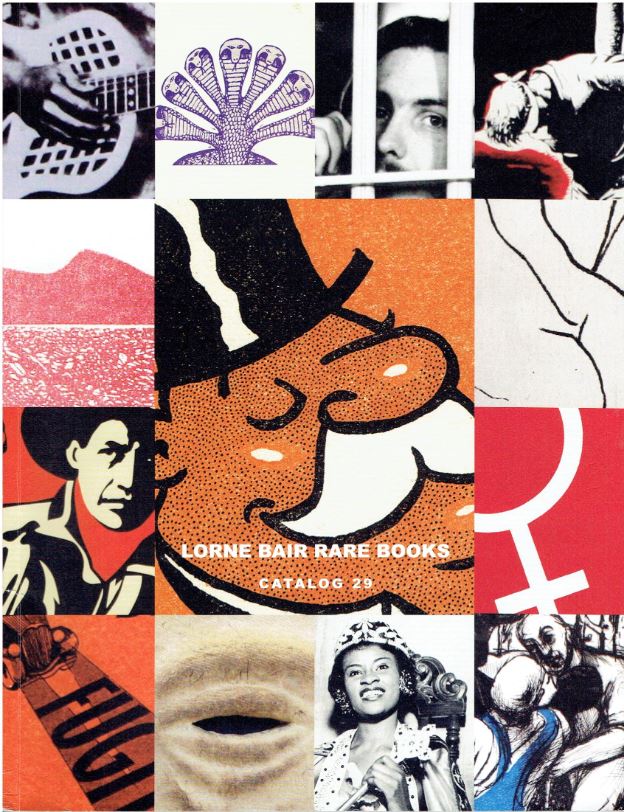 Lorne Bair Rare Books recently published their Catalog 29. Bair specializes in material related to social movements, or as they say, "American (and un-American) social movements." "Un-American" could refer to social movements outside of the U.S., but generally it refers to the label put on groups from the left by those on the right. Think of the House Un-American Activities Committee. You can find something in here from the radical right, but the topics listed give away from which side of the spectrum most of this material emanates. Here they are: African American History & Literature; Radical, Social & Proletarian Literature; Radical History & Social Movements; Women's History & Literature; and Graphics, Art & Photography. Now, some specific examples of movement literature and art mostly from the late 19th and 20th centuries.

We will start with an iconic image of Jim Crow at its worst, a gruesome lynching in 1930. Lynchings are almost synonymous with the South, but this one occurred much farther north, in Indiana. Indiana was a hotbed of Klan activity in the 1920s. On August 6, 1930, a crowd estimated at 4,000 white people gathered around the jail in Marion, Indiana. They were after three young black men, accused of killing a white man and raping his girlfriend. They came with a rope. They overpowered the Sheriff, broke open the cells with a sledgehammer, and dragged out and beat Thomas Shipp and Abram Smith, before hanging them from a nearby tree. Later, they dragged the third man to the tree and tied a rope around his neck, but returned him to the jail when someone called out that he was innocent. He eventually was convicted as being an accessory to murder and given a four year sentence. The other two, obviously, never received a trial. The girlfriend later recanted the rape claim. Lawrence Beitler was a local professional photographer. Normally, he did portraits and weddings and the like, but this night, he took his camera out to the scene a few hours after the lynching. Shipp and Smith were still hanging from the ropes, and part of the crowd was still milling around. Beitler's photograph is horrific, showing both the hanging bodies and part of the crowd. Some look happy, others eye the camera without notable expressions. One man points to the bodies. No one looks upset. That is almost as terrifying as the sight of the corpses. We don't know how Beitler felt about the scene, but it appears to have been more of a business opportunity to him. He sold thousands of these photographs at 50 cents apiece. Item 3. Priced at $1,500.

Item 45 will be a favorite for those who like left-leaning folk singers. It's a copy of American Favorite Ballads: Tunes and Songs as Sung by Pete Seeger, published in 1961. Seeger was a compatriot of Woody Guthrie, a voice for the poor and working people. He was one of the four founders of the Weavers in 1948, who skyrocketed in popularity, only to be shot down and practically banned from performing during the Red Scare of the early 1950s. Seeger would go on to have a long singing career, continuing to be a voice for the forgotten up until his death in 2014 at age 94. Seeger inscribed this songbook "For Fred - who knows all these songs already." Of course he did. Fred was Fred Hellerman, one of the other founders and the last surviving Weaver when he died in 2016. $750.

George Washington would have been horrified to see his name associated with this group. Item 67 is a broadside headed, George Washington Birthday Exercises - Mass Demonstrations For True Americanism at Madison Square Garden Monday, February 20, 1939. This self-styled "Pro-American Rally" was put on by the German American Bund, little more than a front organization for the Nazis. It is addressed "To All American Patriots: The increasingly violent, malicious and poisonous attempts to silence and cripple the German American Bund by lying press and radio propaganda... prove that the communistic and other subversive, Jewish-Marxist powers directing these persecutions are in mortal fear of the Bund's reaching and enlightening those Americans still in the dark concerning the red scourge!" It goes on to say "The Bund is an Organization of American Citizens unequivocally committed to the Defense of the Flag, Constitution and Sovereignty of these United States..." The broadside claims that "100,000,000 Aryan (White Gentile) Americans" are "the Only means of preserving Independence and the Christian Culture and Civilization of the Country today!" This stuff sounds so eerily and frighteningly similar to words spoken today. What was it Santayana said about those not learning from history being doomed to repeat it? $1,250.

Now we get to see the handiwork of the Bund's "pro-American" friends. Item 71 is an album titled Conc. Camp Dachau, published by the International Office for the Former Concentration Camp Dachau after the war. The album was assembled by The United Nations Relief and Rehabilitation Administration, and it documents what went on at this concentration camp. It contains 41 images of the facilities and grounds at the camp, liberated prisoners, the crematory, and "a staggering number of corpses." It also contains photos of the Nazi officers at their subsequent trials. Text is written in English, French, Polish, and German, so that many will understand. $1,000.

The Communists were noted for many things, but fine press work wasn't one of them. Indeed, life was supposed to be austere, dull, and undistinguished, the basic everyone is the same philosophy where there was little wealth to be shared among people other than party leaders. At least, that was life in the mother country, the Soviet Union. However, this broadside, published in the Stalin era, was printed in America. It came from the Alameda County Committee (Oakland, California), Communist Party. It is headed A Re-Declaration of Independence On July 4th, 1937. It was hand-printed in only 50 copies. It is an anti-fascist, pro-working class declaration, saying, "This day we declare our independence of the old-line politicians, and highly resolve to build a People's Democracy, free of the taint of greed and exploitation." Item 63. $850.

This is a very strange take on baseball and other trading cards. Item 103 is a collection of 25 trading cards of 25 Japanese Class A war criminals, photographed at Sugamo Prison, 1946-1947. These were reputedly sold on behalf of the prisoners to generate pocket change to buy cigarettes and personal items. The cards also have a word or two listing the prisoners' sentences, such as "Life," "20 Years," or "Hanged." The most notable inmate depicted in Hideki Tojo, Japan's Prime Minister during the Second World War, who was hanged in 1948. $1,500.