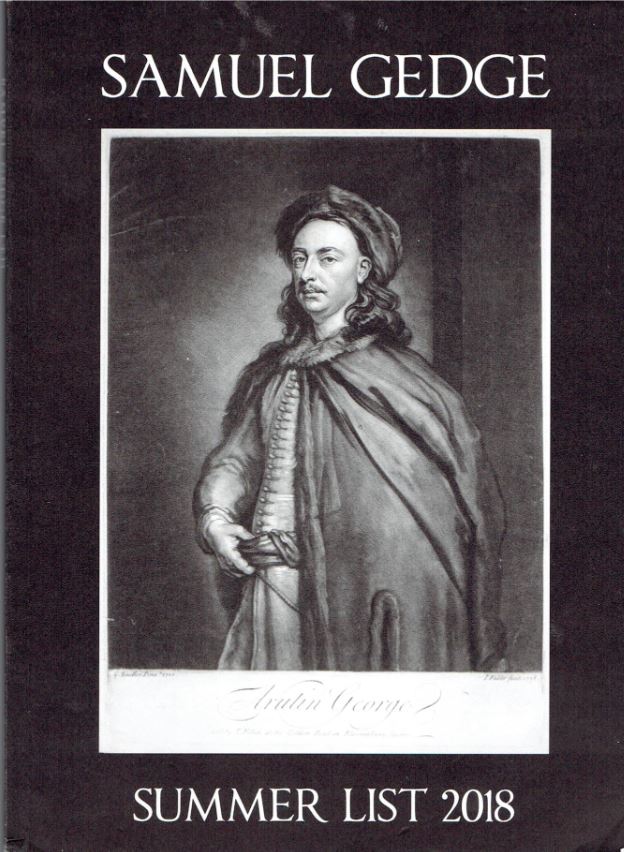 Samuel Gedge Ltd. is offering a Summer List of Books, Manuscripts & Ephemera. Gedge focuses primarily on obscure, older material, usually early 19th century and older, from England and Europe. Much of it consists of various types of documents and ephemera, unique or very rare, that is surprising to discover still exists. There is also a large selection of books, mostly obscure novels, Gothic novels in particular, from the 18th to early 19th century. Many were written by women, surprising since there were not that many women writers at the time. Some are made even more obscure as they are translations from one European language to another of the original text. Here are a few of the always interesting, always hard-to-find items in Gedge's Summer List.

This has to be one of the better investments you will find, presuming it actually paid out as planned. It is headed Strand Bridge, and it is an annuity certificate put out by "The Company of Proprietors of the Strand Bridge," to the purchaser, William Maughan of the Bank of England, gentleman. The company was the Strand Bridge Company, and the bridge was known as the Strand Bridge as of the date of this offer, July 5, 1814. In 1816, a year before it opened, the name was changed to the Waterloo Bridge, in honor of the British victory over the French in Napoleon's last stand. The Waterloo Bridge still crosses the Thames today, though it is a replacement built in the 1930s. The annuity provided that for an investment of £60, the recipient received £8 per year for 99 years. That is essentially a 13.33% return for the rest of your life, your children's, and your grandchildren's lives. The annuity was to be funded by tolls collected on the bridge. Amazingly enough, the bridge stood for over 99 years, so maybe it did pay out. However, it was nationalized in 1878 and the tolls removed, so we don't know what happened to the annuities then, presuming they were still paying at the time. Item 93. Priced today at the cost of 7.5 annuities, or £450 (British pounds, or approximately $601 in U.S. dollars).

This next item gives me the creeps, but so does anything medical related. It is certainly a great item for those with the stomach to collect in the field of medical devices. It is titled An account of a new mode of operation for the removal of the opacity in the eye, called cataract, by James Earle. It was a new mode indeed, but it was "new" in 1801. Sir George Earle was evidently one of the best in the land, being the surgeon-extraordinary to King George III, but still, messing with your eyes in 1801 sounds frightening. Dr. Earle's clever device had a spear pointed instrument which led forceps around the cataract. Once in place, a spring-loaded device would remove the spear, leaving the forceps in place to grab and remove the cataract. Hopefully the surgeon had a steady hand. The result, if successful, was undoubtedly worth the horror of participating in this surgery, I think. Item 124. £950 (US $1,268).

Girolamo Bartolomeo Piazza was an Italian immigrant to England who knew how to make himself popular in his new home. He wrote a scathing attack on the Inquisition, as enforced by the Catholic Church. The title is A Short and True Account of the Inquisition and Its Proceedings, as It is Practis'd in Italy, Set Forth in Some Particular Cases, published in 1722. To make sure the message was properly received, it contains a fawning dedication to King George I, hoping it would be "of use in exposing the folly and madness of your Majesty's enemies." The text is printed in both English and French. Piazza was a former Catholic, converted to the Anglican Church. It describes various cases and punishments, including the rack, and makes a claim of "eleven thousand English virgins martyred together at Cologne." This claim relates to the legend of St. Ursula, a supposed British princess who set off on a pilgrimage in the fourth of fifth century with 11,000 virgin ladies, only to have their ships wash ashore. They were captured and all beheaded except Ursula, who was shot with an arrow. This tale did not appear until many centuries later, and its accuracy is questioned by many, including anyone with an ounce of common sense. As for Piazza, he did fine in his new country, teaching Italian and French in Cambridge for many years. Item 8. £650 (US $868).

Next we have another Italian who came to England, but he came as a touring performer, not an immigrant. His name was Picco (apparently Joseph Picco or Angelo Picchi). Picco was a Sardinian shepherd, born blind, who played what, as a result of his tour, became known as the "Picco pipe." It is a tiny flute-like instrument, just a few inches long. It would be sold under that name in the twentieth century as a children's toy. Picco came dressed in a Sardinian shepherd's outfit, and he must have played very well as he became quite popular in England and Europe during the mid-1850s. Item 166 is a broadside announcing, St. James Theatre. Picco, The Blind-Born Sardinian Minstrel's Concerts, For A Few Nights Only, Commencing On Monday, the 21st of April. That would be 1856, when Picco gave several concerts in London. £450 (US $601).

Item 136 is a 1788 second edition of Heloise: of the Siege of Rhodes. A legendary tale... The author was George Monck Berkeley. Berkeley was the grandson of a more famous namesake, the philosopher George Berkeley. This Berkeley was a playwright, poet, and novelist, who also wrote a biography of Jonathan Swift. His output would have been greater, and perhaps his reputation more established today, if had had a longer career, but Berkeley died in 1793 at the age of 30. Gedge describes Heloise as "a sort of Ottoman Gothic." The heroine and her lover are taken prisoner by the Turks. He is sold into slavery, but they manage to escape and reunite in France. According to The Monthly Review, this is a "most agreeable novel; very different from the trash that issues from the press, under the title of Cruel fathers, Reformed rakes and Constant lovers." £2,500 (US $3,345).