Manuscripts, Archives and Photographs from the William Reese Company 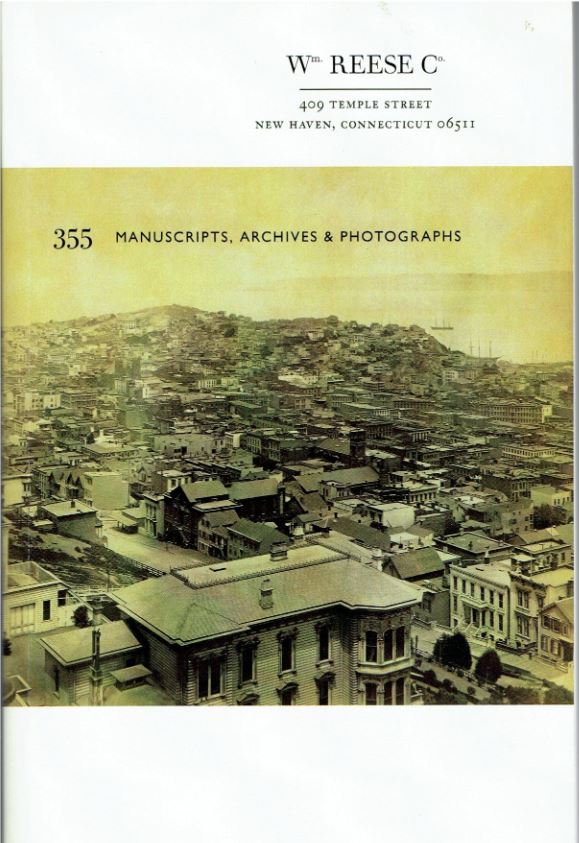 The William Reese Company has published their Catalogue 355, Manuscripts, Archives & Photographs. There are actually a few books in here too, but this is primarily a selection of other types of paper, including numerous photo albums and handwritten documents. Most items relate to or were created by Americans, but here, too, there are exceptions, such as the German visitor's turn-of-the-century photographs of Vladivostok or a panorama of Venice. There is much of great interest to be found, such as these examples.

We begin with an account of a harrowing experience. J.L.B. Cauvelt wrote his account in a letter dated November 21, 1867, while serving on the U.S.S. De Soto at St. Thomas, Virgin Islands. On November 18, while they were anchored in the harbor, an earthquake estimated at 7.5 on the Richter scale struck, followed by a pair of tsunamis. At 2:50 p.m. they felt the ship shaking and immediately recognized it was an earthquake, all rushing to the deck. They looked out to sea and saw "an immense wall" of water, 35-40 feet high, about two miles out of the harbor. Around two minutes later, they saw it begin hitting ships at the outer edge of the harbor. It tossed them around with a "fearful force...as if they were but shells." A tug boat took the full force, its captain found dead a short time later. A sailboat was hit and all were lost. Seeing this "we were all rather anxious about our own fate," but the wave diminished as it got deeper in the harbor. Their ship was ripped from its cables and washed ashore with serious damage, but they survived. The people of the island, Cauvelt relates, "were in the greatest state of excitement as well as in the most abject state of fear being on there [sic] knees & praying more like maniacs than reasonable beings to all the saints in the callender [sic]." Item 36. Priced at $1,750.

William Ellery is best known as a signer of the Declaration of Independence (though hardly the best-known signer of the Declaration of Independence). He was a delegate to the Continental Congress from Rhode Island, though it was a twist of fate that brought him there at that fateful moment. A more famous Rhode Island politician and former governor held the post when he died on March 26, 1776, with Ellery named in his place. Ellery later held various other posts, such as Rhode Island Supreme Court Chief Justice and, for many years, customs collector at Newport. Then, there was an even more important role in his life - father. Ellery was a father. Boy was he ever. Ellery had 19 children, and yet somehow he found time to write this lengthy, sympathetic letter to his daughter, Almy, who became ill while her husband, William Stedman, was off in Washington serving as a congressman from Massachusetts. His advice is tender, admonishing her, "You must not iron; nor exercise the brush or broom; and you are not to be distressed if the tables and hand irons should not shine; nor even if a web should be woven in the obscure corner of your rooms." Ellery does show some humor after giving his serious advice, noting that Dean Swift (Jonathan Swift) "has observed that he never knew a person who could not bear the affliction of another perfectly like a Christian." He concludes he hopes he is not too apt to give advice, but that this advice will be beneficial. He points out, "I am a father, and never gave a stone to a child when it asked for a fish." That is a good father. I am too, as I never gave a child a stone for a fish, but then again, none of my children ever asked for a fish, so I can't say for certain what I would have done. Item 50. $2,500.

Here is a remarkable deed, a land grant from New York's Mohawk Indians to an English settler. It is for land located near Fort Hunter, west of Albany, near the confluence of the Mohawk River and the Schoharie Creek. This was a time when the British and the French vied for friendship, support, and trading rights with the Indian tribes. These Mohawks were aligned with the British. In 1710, four chiefs had gone to England to meet with Queen Anne. They requested a fort and Anglican missionaries, to counter the inroads of the French and the Catholic missionaries. Queen Anne granted their request, authorizing the construction of Fort Hunter in 1712. This land cession occurred four years later, the grantee being "Rebekea," daughter of Capt. John Scott, first commander of the fort. The deed spells out that the land was given "in Consideration of the Great love, favour & affection we have and do bear toward our great friend and Loving Acquaintance Capt John Scott." It is signed by Mohawk leaders with their pictograph signatures. They are identified as "Craine," "Asras," "Sancler ye Indian," "Tequoinhunt," "Joharis ye Indian," "Cornelius Ind.," and "Kawinadichtow." The deed is dated, "In the Mohaughs Cuntry" on May 14, 1716. Unfortunately for the Mohawks, they retained their loyalty to the British during the American Revolution, and lost their land after their guardians lost the war. Item 90. $20,000.

The next item is a document from one American president to another, though it was sent before either reached that high office. Sadly, neither has made it into the pantheon of great presidents. Dated August 18, 1917, Herbert Hoover, then head of the Food Administration, responds to Ohio Senator Warren Harding, who had recommended a Mrs. L. F. McFarland for a position in Hoover's department. Hoover responds that it is impossible to say whether the department can avail itself of Mrs. McFarland's services but that her application "will receive every attention." Don't call us, we'll call you. Harding would go on to lead one of the most corrupt presidencies in U. S. history, though he was not involved in the corruption himself, while Hoover would be president when the Great Depression befell the nation. Harding died in office, Hoover overwhelmingly voted out in the next election. Item 67. $600.

The next letter comes from a man who became President to a man who did not, though he certainly wished to be. There is a great irony here. It is dated August 28, 1841, and the letter is from Congressman Millard Fillmore to Secretary of State Daniel Webster, recommending James Thompson for U. S. Consul to Glasgow. Webster was a giant of the senate, a great orator and one of America's most notable leaders in the period between the Revolution and Civil War. His defense of the Union during the Nullification Crisis of 1830 is one of the greatest speeches in American history, noted most for the line, "Liberty and Union, now and forever, one and inseparable." He never became President, despite repeated tries. Millard Fillmore was a former congressman from western New York then serving as Comptroller of New York State, not generally regarded as a stepping stone to the highest office in the land. Nonetheless, when the Whigs nominated a southern slaveholder as their presidential nominee in 1848, the party looked for someone from the North to balance the ticket. Fillmore, being a successful vote-getter in the important state of New York, was the convention's choice. He was nominated for and elected as vice-president, and when Zachary Taylor died after only a little more than a year in office, Fillmore became President. Fillmore proved not much of a president, unable to stop the deteriorating relations between North and South. He was denied his party's renomination for President in 1852, but ran again (unsuccessfully) in 1856 as the nominee of the anti-Catholic, anti-immigrant Know-Nothing Party. Sometimes, it is not the greatest that ascend to the presidency. Item 52. $1,500.