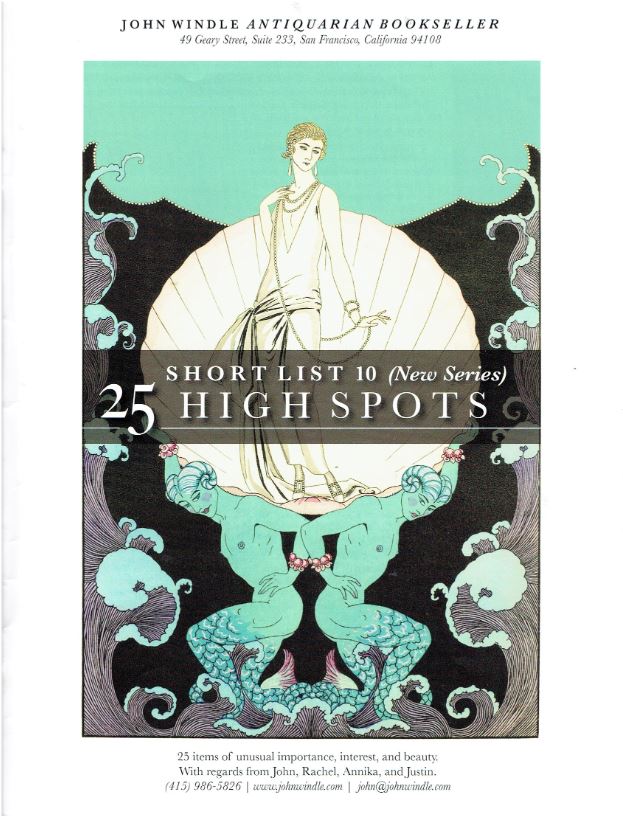 John Windle Antiquarian Bookseller has issued Short List 10, 25 High Spots. These are definitely high spots. There may not be a lot of books here, but the value is right up there. There are 25 items, varied in terms of subject but consistent in terms of significance. Here are a few of them.

We begin with what Windle modestly calls "the single most important scientific book ever published." Arguments might be made in favor of Copernicus, Newton or Einstein, but Windle quotes evolutionary biologist and science historian Ernst Mayr as to why On the Origin of Species by Charles Darwin is the most significant of all. The others discovered great truths, but their teachings were often beyond comprehension by the average person, nor did they impact how people saw themselves so deeply. Darwin's discovery had a huge impact "on man's concept of himself." He continues, "Every modern discussion of man's future, the population explosion, the struggle for existence, the purpose of man and the universe, and man's place in nature rests on Darwin." Item 7 is a first edition, published in 1859. Priced at $87,500.

George Barbier was a French artist and illustrator whose high point came in the 1920s. His Art Deco style worked well in the images he created of "flappers" and others in an era Windle describes as of "unsurpassed glamour, elegance and decadence." Item 1 contains his five annual issues of Falbalas & Fanfreluches: almanach des modes présentes, passées et future (Ruffles and Frills) for the years 1922-1926. They display the artist's great interest in fashion. That is one of his images you see displayed on the catalogue's cover. $12,500.

Perhaps no couple personified the Roaring '20s like F. Scott and Zelda Fitzgerald. They led the exciting life, beyond their means, always on the edge. Scott chronicled the lifestyle in his books. Unfortunately, the '20s came to an end, and so did the charmed life of the Fitzgeralds. The Fitzgeralds' life, like the '20s, turned into a great depression. Again, Scott wrote about it, this time in a more personal novel, Tender is the Night. This thinly disguised account of his own experiences describes the turmoil in his life, as he struggled to make ends meet, while Zelda drifted deeper and deeper into her deteriorating mental state. She ended up institutionalized, and Scott never published another novel (an incomplete final novel was published after he died). We have heard of one-owner old cars, but this is a one-owner old book. This copy was purchased on publication in 1934 and has been with the same owner ever since. Item 14. $18,500.

Next we have likely the most influential American novel ever written. It comes with a letter that describes the ravages of dementia that plague society as much or more today than ever, though we are over a century removed from this time. Uncle Tom's Cabin had an enormous impact on American society, stirring up great resentment of slavery and encouragement for the abolition movement when first published in 1852. It told the story of slavery in human terms, rather than those of property rights championed by the South. The effect was devastating. Years later, a Mr. W. H. Cathcart sent Mrs. Stowe his copy of an 1892 edition of her masterpiece, requesting she write a few lines from her book in his copy. By then it was a challenge, but her daughter, also Harriet Beecher Stowe, after several attempts, was finally able to get her mother to fulfill the request, albeit on a separate, inserted paper. Mrs. Stowe writes a quote for each of the two volumes, one being from Uncle Tom's death scene. In the letter, dated October 17, 1894, the younger Ms. Stowe explains that "writing for her is such an effort now." She continues, "I have had her attempt two or three times to write for you but without success until to day, when what she has written is quite as good as we can ever expect from her again." The elder Mrs. Stowe had by then suffered from dementia for several years. She died in 1896. Item 25. $9,500.

Item 3 is the first edition of William Blake's first book, Poetical Sketches, published in 1783. It is one of 24 known copies, only three of which are still in private hands. Blake was an unknown poet at the time. The book contains 72 pages, and was printed in a very short run. Blake's friend, sculptor and illustrator John Flaxman, had a friend of his pay for the printing, which was undertaken by Flaxman's aunt. The poems themselves were mostly written while Blake was still in his teens. However, in time they have come to be critically acclaimed. It does not appear that this book was ever officially published as in sold to the public. Copies were given to various friends or friends of friends. Blake placed handwritten corrections in several copies, this being one. It also contains an inscription from Flaxman to John Long. Blake is a writer/artist whose reputation has grown immensely over the years, as has the value of his works. This particular copy sold in the George C. Smith sale in 1938 for $350, in the Bradley Martin sale in 1990 for $121,000. Offered for $250,000.