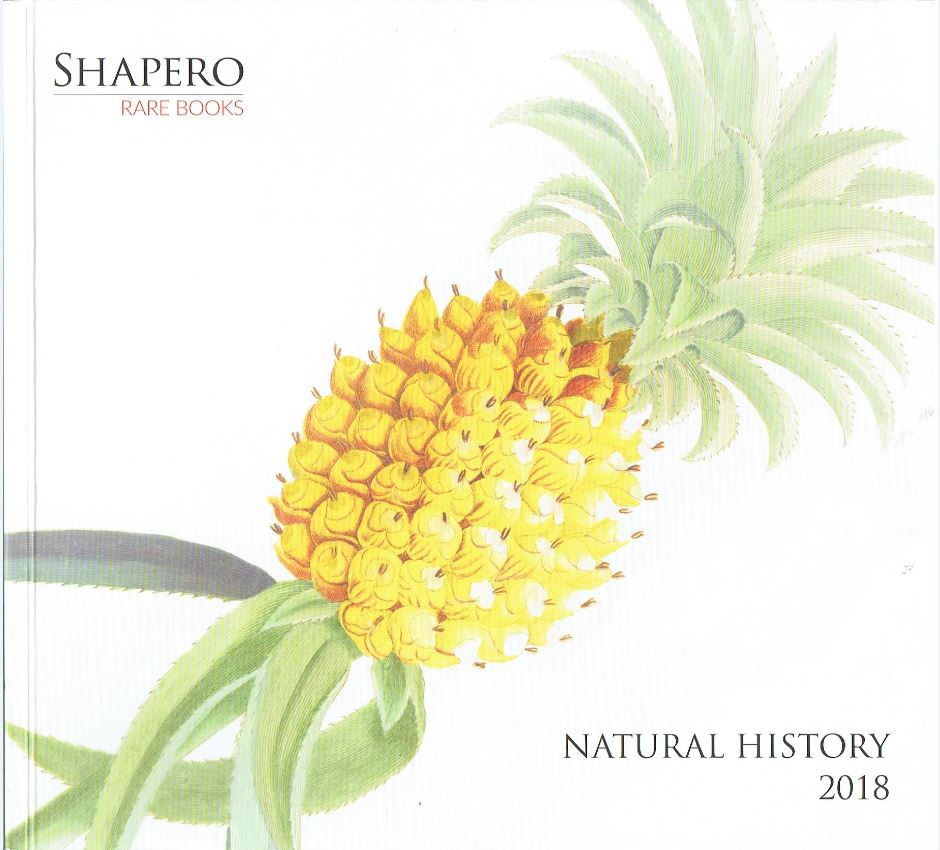 Shapero Rare Books has issued a new catalogue of Natural History 2018. Actually, it contains more than just natural history. The contents are broken down to Natural History, Sporting Books, and Works on Paper, including Watercolors and Modern & Contemporary Prints. The works on paper are essentially single page items while the others are full books. What almost all of these items have in common are the illustrations, many of them virtually works of art on their own. Illustrated bird and flower books and single images, of which there are many, are practically guaranteed to be beautiful based on their subject matter. Here are a few selections from this catalogue of natural history and more.

We begin with an album of distinctively Chinese culture. It is an album of 14 watercolors on Chinese paper depicting the life cycle of the silkworm. The moth/worm's production of silk was discovered by the Chinese thousands of years ago, and they managed to keep it secret for most of that time. Over that period, they bred the silkworms for greater production and egg laying capacity. The result is an insect that can no longer live on its own, but is dependent on humans to raise and care for it. Eventually, the secret was smuggled out of China, first to Japan, Korea, and India, and finally making its way to Europe. This album, bound in contemporary Chinese cloth, was produced circa 1820. Item 5. Priced at £8,500 (British pounds, or about $11,312 U.S. dollars).

Many of the most notable and beautiful of natural history books were illustrated texts about birds. Here is one of the more significant ones around. The title is A natural history of birds. Illustrated with a hundred and one copper plates, curiously engraven from the life. Published by the author Eleazar Albin, and carefully colour'd by his daughter and self... What Albin neglected to mention in the title was the contribution of his sons. For his colors Albin ground vermilion pigment and combined it with boys' urine. Perhaps that explains the "curiously" part of the title. Since this first edition, first issue of three volumes was published 1731-1734, it surely is well-dried and clean by now. This was the first British bird book to provide colored plates. There are 306 of them with captions in English and Latin. Albin placed his birds on branches or on the ground, giving them a more life-like appearance. Item 1. £35,000 (US $46,590).

This next book unites England with America. It is the work of the greatest of English illustrators of birds, England's Audubon, so to speak. John Gould wrote and illustrated numerous books about birds, but most were of British birds, or those from Europe, Asia or Australia. However, he did one on American birds, and this is it: A Monograph of the Odontophorimae, or Partridges of America. Given a choice between those two names, we'll stick with calling them "partridges." Gould was shown some specimens brought back by Capt. Frederick Beechey on his voyage to the west coast of America and found them to be extraordinarily beautiful. He then traveled all over to see more, visiting Paris, Brussels, Frankfort, Berlin, Amsterdam, and numerous other locations. One place he did not go to was America. That was too far, but he visited and drew specimens in collections all over Europe. This book contains 32 plates hand-colored by Gould and H. C. Richter. It is easy to see why Gould found the birds to be so beautiful. The book is dedicated to Charles Lucien Bonaparte, a noted French ornithologist who encouraged Audubon. He wrote a book about American birds and actually spent a few years in the country. Charles Lucien was a nephew of the more famous Bonaparte, Napoleon. Item 15. £19,500 (US $27,858).

The next item connects America with Germany. It is a very rare book, privately published, with Shapero only being able to locate one other copy anywhere. The title is Jagd-Ausflug dirch die Rocky Mountains (hunting trip through the Rocky Mountains) published in 1893. The author was Philip Leibinger, and perhaps you remember him as proprietor of Leibinger Brewing in New York. Probably not, as that brewery shut down in 1899. Leibinger was a sportsman, going on outdoor expeditions as well as participating in yachting events. I have not been able to find what happened to him after the brewery closed. What is notable about this book is the illustrations, 60 photographs taken by Leibinger on this hunting trip. They include pictures of the hunting party, its horses and weapons, and a bear they hunted. There are also pictures of the scenery, with many of them taken in Yellowstone Park. This is a presentation copy, inscribed by the author to German Chancellor Otto von Bismarck in honor of his 80th birthday in 1895. Item 54. £37,500 (US $49,703).

Here is another hunting book, but this time we will connect Russia and France (and without the benefit of a Bonaparte who connected those two nations in an unpleasant way). Item 52 is La Chasse Grand-Ducale et Tsarienne en Russie. Periode du Xe-XVIe siecle; La Chasse Tsarienne en Russie. XVIIe siecle, two volumes published in St. Petersburg, 1896-1900. This is the first edition in French of the first description of hunting published in Russia. It actually consisted of four volumes, but only two were translated to French. The author was Nicolas Coutépoff (Nikolay Kutepov). He describes not just the hunting, but the entire related lifestyle of the Russian court. It includes numerous illustrations of hunting and the royal Russian lifestyle. The volumes cover the time period from the 10th through the 17th century (the untranslated volumes continued through the 19th century). £15,000 (US $19,878).