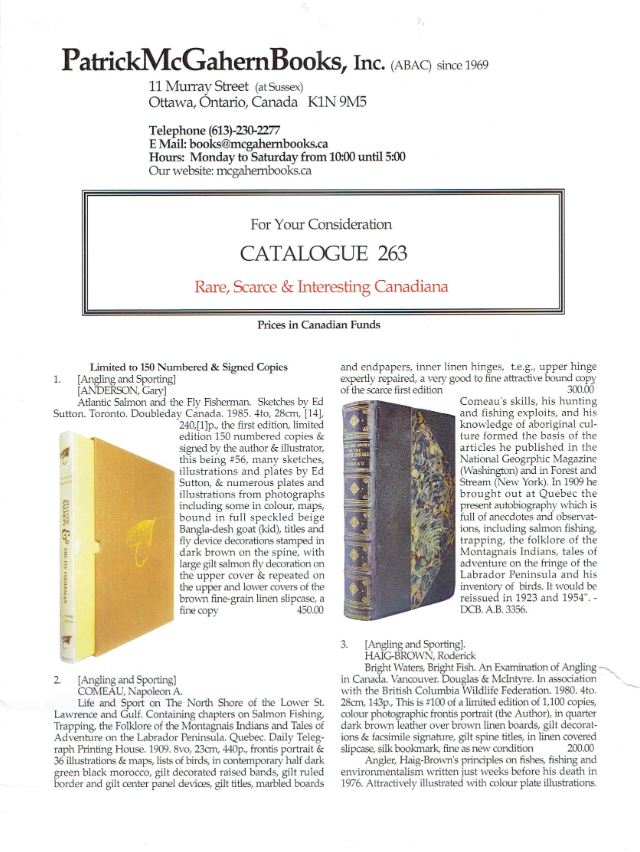 This month we take a look at Catalogue 263 from Patrick McGahern Books, Rare, Scarce & Interesting Canadiana. Some of these items, at least in part, sneak south of the border, but most are focused on the northern half of North America. Anything relating to Canada is fair game, but we note a few topics have particular concentrations within this catalogue: angling and sporting, lumbering (as in woodcutting, not moving slowly), and the Oz books. The Oz books? Was Oz located in Canada? In this case, yes. What we have is a selection of Canadian editions of Oz books, both the first ones from creator L. Frank Baum, and ones written by Ruth Plumly Thompson after Baum died in 1919. Here are a few specific selections.

We begin with a book that covers a much wider range than just Canada. It covers the world. John C. Phillips was an outdoorsman and naturalist, a Boston native who became a very prolific writer on those subjects. He was particularly attracted in his youth to the American and Canadian northwest. He must have enjoyed the colder climes as, for a while, he accompanied Robert Peary on his Greenland expedition. Item 9 is one of his most impressive works, A Natural History of the Ducks. It contains four volumes, published 1922-1926. It includes 102 plates, 74 in color, and 118 distribution maps. McGahern notes it is "among the classic works on ornithology and of modern illustrated books. It is an extensive account of the ducks of the world, with synonyms, description, distribution, and characteristic habits, etc. for each species." Priced at CAD 1,250 (Canadian dollars, or approximately $978 in U.S. funds).

As long as we are describing Massachusetts writers, despite this being a Canadiana catalogue, here is another. Lieut. Dudley Bradstreet came from Groton, Massachusetts, but this goes back to the time before there was a United States, and Britain, the colonial power that controlled Massachusetts, was in the process of expanding its holdings in Canada. Item 36 is the Diary kept by Lieut. Dudley Bradstreet of Groton, Mass. During the Siege of Louisburg. April, 1745 - January, 1746. The French had built a major Fort along the Nova Scotia coast at Louisburg, both to protect access to Canada (which it then mostly controlled) and to provide a port from which to harass the New England colonies when it deemed appropriate. In 1745, England and France were in one of their never-ending wars, this time the War of Austrian Succession. The British used the opportunity to attack the fort. While well-fortified from sea, it was vulnerable to back attacks by land, and the French defenders were not well trained. The American colonists were successful in seizing the fort on behalf of their colonial masters. However, when the French and British temporarily reached a peace agreement in 1848, the British gave it back to France, in return for concessions in the Netherlands and India. It would not last for long. The French and Indian War (or Seven Years' War) would come a few years later, and in 1758, Louisburg was seized once again by the British, this time for good, or at least until Canadian independence. Bradstreet's diary describing the siege and capture of Louisburg was not published until 1897. It was edited by Samuel A. Green, who has inscribed this copy. CAD 150 (US $117).

This next item takes us to the French and Indian/Seven Years' War. McGahern describes this work as a "first edition of the most important French authority on the Seven Years War in North America." For this one, you will need to read French, as I assume everyone in Canada and Louisiana can do. The title is Mèmoires sur la Derniere Guerre de l'Amèrique Septentrionale, entre France et l'Angleterre. The author of this book was Pierre Pouchot, who was both an engineer and a soldier. In the former role, he was charged with shoring up the defenses of Fort Niagara. In the latter role, he was made commander of the forces there. Neither worked out well as he was forced to surrender the fort in 1759. He was next placed in charge of Fort Levis, but had to surrender that too in 1760. In fairness to Pouchot, the deck was stacked against him as the French could not match British forces in North America. His book was designed to be a vindication of his service. There was much corruption in French Canada and Pouchot was accused of taking part. In defending himself, Pouchot describes the corruption, along with an account of the war, topography, and customs of the Indians. Item 56. CAD 12,000 (US $9,366).

Our next item is a photograph, dating back to the 19th century. It was taken by Calgary photographer A. S. Smyth ("The Ranchmen's Photographer") in the 1890s. It is at Holland's Ranch in the Porcupine Hills of southern Alberta. There are four men on horses, with a group of women in the background watching. Perhaps somewhat incongruously for the rural west of Alberta, the horsemen are playing polo. McGahern informs us that polo was popular among ranchers in Alberta in the late 19th century. Obviously, it was both a participant and viewer sport. Item 55. CAD 150 (US $117).

Okay, I think someone is trying to fool me here. Item 11 is Canadian River Hunt, by General W. E. Strong. That sounds like Canadiana, no? Perhaps in a manner of speaking, but it is not Canadiana in the sense of Canada. I know very well that the Canadian River runs through the American southwest. It runs from Colorado through New Mexico, Texas, and Oklahoma, before hooking up with the Arkansas River. None of those are anywhere near Canada. The author, Gen. William Emerson Strong, served with the Union during the Civil War, including as an associate and friend of Gen. Sherman. He was an officer in the Freedmen's Bureau after the war and went on a number of such sporting excursions later on. This one took him to Indian Territory (today Oklahoma) where Strong hunted turkeys. They found thousands of turkeys, deer, quail and other critters. While the trip took place in 1878, this book was not published until 1960, by the University of Oklahoma Press. CAD 150 (US $117).