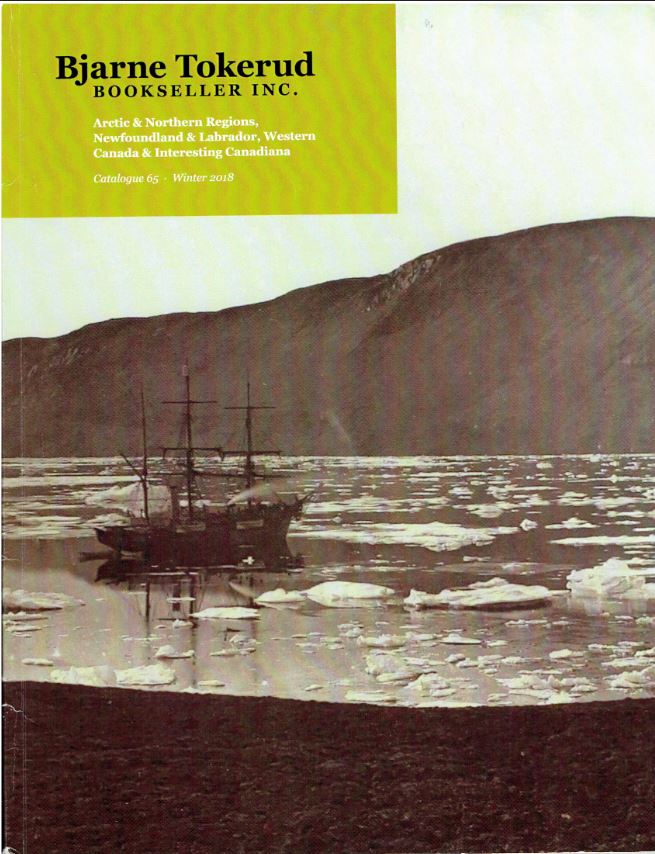 Bjarne Tokerud Bookseller has issued Catalogue 65 - Winter 2018. Arctic & Northern Regions, Newfoundland and Labrador, Western Canada & Interesting Canadiana. The "Winter 2018" is a bit ambiguous. Either we are a bit late, or very early, for winter 2018. Or, considering how far north some of these places are, it's always winter and we are just in time. Tokerud, not surprisingly, is a Canadian bookseller, located in Victoria, B.C., in the southwestern corner of Canada. Interestingly, we find many works pertaining to western Canada and to the Atlantic provinces, with not much on the most populous Canadian provinces, Ontario and Quebec, in between. There are some great photographs here along with the written material. While we won't attempt to describe these items as pictures are hard to put into words, there is a great section of vintage western Canada photographs. These pictures are worth thousands of words. Here are a few other items we found in this catalogue, which fell just one short of 200.

We know the names of many of the great explorers who set out on their expeditions, usually along coasts by boat, to discover unknown lands. This is true of western America, and yet there was a group of unknown people who traversed that land, on both sides of the U.S.-Canadian border, who knew more about the land than most of the most famous of explorers. These were the fur trappers and traders, and one such man was David Thompson. He did most of his traveling through Canada, but he was also the first to survey the entire length of the Columbia River. Thompson was a trader who worked for the Northwest and Hudson's Bay Companies, said to have traveled some 50,000 miles during his years in the west. His account is entitled David Thompson's Narrative of His Explorations in Western America, 1784-1812. The first part covers the years 1784-1807 when he operated east of the Rockies, the second part 1807-1812 when he crossed to the other side. Streeter calls this book, "One of the most important contributions to Western history and exploration published in the twentieth century." Thompson was not an ordinary trapper, but an astronomer and amazingly skillful cartographer. Eberstadt notes, "Besides being a fur trader, he was an able astronomer and geographer and used to the greatest advantage the opportunities vouchsafed to him, as to no other man, to map the uncharted regions of the western country. His maps were so exact that they were used extensively by Arrowsmith." Thompson completed his manuscript in 1847, intending to publish it, but never was able to do so. It was later purchased by J. B. Tyrell, editor of this book, who recognized its importance and had it published in a limited edition of 500 copies (this is no. 180) in 1916. Item 5. Priced at CAD 5,500 (Canadian dollars, or approximately $4,285 in U.S. dollars).

John Franklin was a brave, though not necessarily the most adept of explorers. He headed several Arctic expeditions, mostly by boat, but his first was a trek over land in the far Canadian north. The idea was to go by land to the Arctic Ocean, and then explore its coast from the Coppermine River to Hudson Bay. Twenty men set out in 1819, and managed to travel up the Coppermine River and explore 500 miles of coast before being forced to turn back. They expected greater help from fur trading companies and natives. Add to that unusually harsh weather and a lack of expected game, and the men were reduced to starvation. Their supplies were inadequate, forcing them into a retreat over an uncharted route. Eleven of the 20 people on the expedition died, mainly from starvation, though there was one case of murder, before finally being rescued by Yellowknife Indians. Along the way, they were forced to live off of lichen and Franklin became known as "the man who ate his boots." Local fur traders criticized Franklin's lack of preparedness, but back home in England he was hailed as a hero for his bravery. He wrote about the miserable journey in Narrative of a Journey to the Shores of the Polar Sea, in the years 1819, 20, 21, and 22, published in 1823. Franklin would receive several more Arctic commissions, but his last would be even worse, his ships being trapped in ice, and all of his men dying from starvation, disease, and cold, as they unsuccessfully sought a land route to rescue. Item 1. CAD 1,800 (US $1,401).

Here is another account of a first journey of a northern explorer, except his final one would end in triumph, not tragedy: Northward over the Great Ice: A Narrative of Life and Work along the Shores and upon the Interior Ice-Cap of Northern Greenland in the Years 1886 and 1891-1897, published in 1898. Robert Peary set out on a relatively short Greenland adventure in 1886, from which he became enamored of Arctic exploration. He returned to Greenland a few years later with several comrades for a more ambitious expedition. He thought Greenland might be part of a larger land mass that extended all the way to the North Pole. He eventually was able to determine that it did not, that Greenland was an island. Nevertheless, he made many discoveries, and learned the ways of the native people, which would aid him on later journeys. He spent time with the Smith Sound Eskimos, whom Peary described as "the most northerly human beings in the world." In 1909, Peary became the first person to reach the North Pole, a claim still mostly accepted, but doubted by some. Item 95 CAD 350 (US $273).

I guess we could call Stuart Cumberland an "explorer," though he hardly faced the challenges of Peary, let alone Franklin. He did his exploring from a railway car. His book, published in 1887, is entitled The Queen's Highway from Ocean to Ocean. Cumberland rode the newly completed Canadian Pacific Railroad from Victoria across the continent, claiming to be the first newspaperman to do so. That's a first, though not as impressive as first to reach the North Pole. Nonetheless, Cumberland provides us with some valuable information. He offers descriptions of cities, geography and commercial activity along the route just after the railroad opened in the West, with particularly descriptive accounts of the Rockies. Item 153. CAD 125 (US $97).

Next we have Forty Years in Canada. Reminiscences of the Great North-West with Some Account of His Service in South Africa, by Colonel Samuel Steele, published in 1915. Tokerud describes Steele "as an original member of the NWMP who was sent to capture Big Bear after the Frog Lake Massacre in 1885." I think you need to be Canadian to decode that. I was quickly able to decipher that NWMP must be the North-West Mounted Police, but Big Bear? I only know that as a lake and popular spot in California. Frog Lake Massacre? I didn't even know where Frog Lake was, let alone anything about a massacre. So, with a little research, here is your answer. Frog Lake is a small Cree community in eastern Alberta, though at the time it was part of the Northwest Territories. Big Bear was their main Chief. Big Bear had resisted a treaty with the Canadian government to move to a reservation in return for rations, but by 1882, was forced to succumb. Declining buffalo herds put his people at risk of starvation. However, conditions remained poor for the tribe, with hunger and mistreatment by the local Indian Agent. At the time of the North-West Rebellion, where local Métis people (mixed race Indian and European) briefly appeared to have the upper hand, another Chief, Wandering Spirit, led some of the tribe to rebel. They captured some of the settlers, and things went wrong when the Indian Agent refused to leave the area. Wandering Spirit shot him in the head, and in what followed, eight more settlers were killed. That was the "Frog Lake Massacre." It was soon put down, and the Canadian government hanged eight of the natives, including Wandering Spirit. Though Big Bear argued against the rebellion, he was convicted of treason and sentenced to three years in prison. Item 176. CAD 150 (US $117).

This is the book you must have to learn about Canadian war horses in the First World War. That may be an unsubstantiated claim on my part, but how many books can there be about World War I Canadian war horses? Item 195 is The Horse in War and Famous Canadian War Horses, circa 1930s. The author, Lt. Col. D. S. Tamblyn, presumably a Canadian War Human, has signed this copy. CAD 150 (US $117).