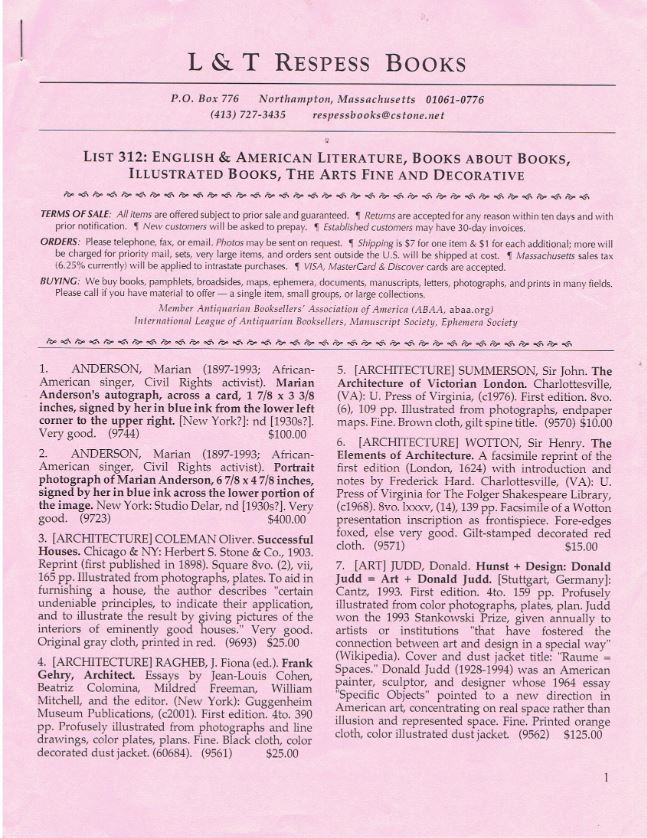 Many topics from L & T Respess.

L & T Respess Books has issued their List 312: English & American Literature, Books About Books, Illustrated Books, the Arts Fine and Decorative. That covers a lot of ground. Maybe not everything could appear herein, but the variety is far too wide to pinpoint. We will provide a few samples, but it will only touch the surface of the over 200 listings to be found.

We will place this first item with the illustrated books. The title is The Glass Giant of Palomar, by David O. Woodbury. It is the first British edition, from 1940 (the year after the first American) and is inscribed by the author. Woodbury wrote numerous science-related books during the middle of the twentieth century. Palomar is the Palomar Observatory in the mountains outside of San Diego; the glass giant their original telescope. It was the largest in the world at the time, though it has long been supplanted. It remained the largest until a second telescope was built at Palomar in 1948, and Palomar continued to hold the largest telescope until 1976. Some upgrades have been made, but the original is still in use. The book includes numerous illustrations of this then wondrous device. Item 10. Priced at $125.

The next two books feature the same writer/editor, but they are as different as two books can be. We begin with Printing and the Mind of Man, edited by John Carter and Percy H. Muir. Published in 1967, it was based on an exhibition in 1963 that looked at the role printing had played in the growth in human knowledge. It begins with books five centuries earlier, and if you compare the expansion of knowledge in the 500 years since printing was developed, compared to the 1,000 years before, the role of printing becomes obvious and overwhelming. It describes 424 titles, and there is no greater compliment to a book's importance than to be able to list that it appeared in Printing and the Mind of Man. Item 29. $150.

From the sublime we go to whatever is the anti-sublime. John Carter and Graham Pollard combined to create this 1934 book, An Enquiry into the Nature of Certain Nineteenth Century Pamphlets. Perhaps some of these pamphlets might have qualified for Printing and the Mind of Man, if only... Thomas Wise, along with Harry Buxton Forman, discovered previously unknown first editions by great writers such as Dickens, Tennyson, Kipling, and the Brownings. The problem was they weren't. They were forgeries. Sometimes they would create "true" first editions of stories that were first published in magazines, previously unknown supposed printings. They carried this on for four decades, although suspicions arose along the way. Finally, it was Carter and Pollard's book that blew the whistle on Wise and Forman. It was particularly disconcerting because Wise was also a noted, and for the most part, legitimate bibliographer, but he threw his fake books into his bibliographies to make them appear real. Item 28. $125.

Next we have a romantic novel which may not be regarded as one of the greatest ever written, but it is one of the most important. It is sort of a mini-version of Uncle Tom's Cabin. Helen Hunt Jackson was an obscure writer, not surprising since she wrote anonymously, in the years after the Civil War. She wrote poetry which earned the respect of Ralph Waldo Emerson and others, along with three anonymous novels. In 1879 she went to a lecture by a Chief of the Ponca tribe, and learned of their forced removal from their Nebraska reservation to Indian Territory (part of today's Oklahoma). The climate was poor, they suffered from disease. Mrs. Jackson was outraged and began investigating the situation. The result was a serious book entitled A Century of Dishonor. It is a history of broken treaties. To make sure those in authority knew this history, she sent a copy to every member of Congress (we have no idea how many read it). She agitated for better treatment of America's natives, but those natives engendered little sympathy in the country. It was then that Mrs. Jackson came up with a better idea as to how to reach the hearts of the populace. She would write a novel, a romance that people would like to read, which would also inform. She visited southern California, where she wrote a novel of the difficulties of an orphan half-Indian girl, who grows up to marry an Indian man. It was a great success and did much to inform the public of the natives' plight. It may not have reached the heights of influence of Harriet Beecher Stowe's story, but it was still an important force in changing the hearts of at least some of the population. Item 122 is a copy of that novel, Ramona, a Story, published in 1884. Helen Jackson planned to write more, but unfortunately, she died the following year. $300.

The author of this next book has a couple of presidential names. Item 78 is Special People, by Julie Nixon Eisenhower, published in 1977. Julie Eisenhower is the daughter of President Nixon, who married the grandson of President Eisenhower. This is no Profiles in Courage by JFK, but it is Ms. Nixon Eisenhower's recollections of meeting some significant people as a result of her family ties. There are six diverse subjects, Mao Tse-Tung, Golda Meier, Mamie Eisenhower, Anne Morrow Lindbergh, Ruth (Mrs. Billy) Graham, and a young Prince (maybe some day King?) Charles. This copy is inscribed, "For Senator and Mrs. Long, With all good wishes from Julie Nixon Eisenhower." Senator Long was Russell Long, brother of the legendary Huey Long. He served in the senate forever (actually, it was only from 1948-1987). $20.

Next we have one of several books from one man's bizarre crusade against football at his alma mater, Yale University. George F. Gundelfinger, a 1906 graduate of Yale, wrote some books and plays before taking on his bizarre crusade. Item 225 is The Decay of Bulldogism: "Secret" Chapters in Yale Football History, published in 1930 (an earlier Gundelfinger diatribe against Yale football is also available in this catalogue). This is a compilation of his earlier writings, including magazine articles. Somehow, the moral decay at Yale was tied into its losing football team, which he wanted abolished. This copy comes with a 1948 pamphlet that updates his exposes. He continued his crusade into the 1950s. Gundelfinger taught mathematics at Yale from 1909-1913, but eventually the university ended up suing him over his behavior. Later on, he flooded alumni with his writings about the decline in morality at the university, and he must have become a bit too graphic as he was convicted of obscenity. Beat Harvard. $200.