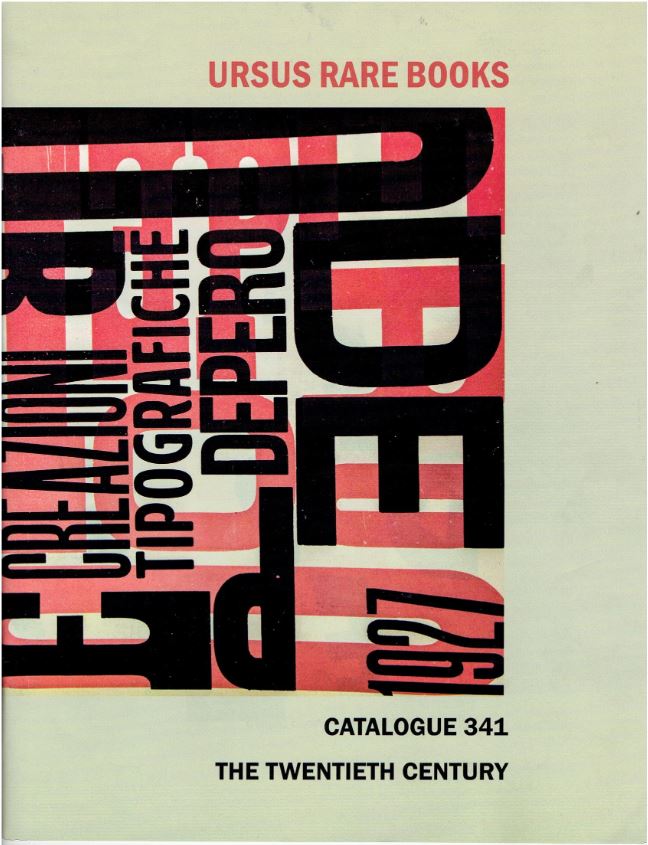 Ursus Rare Books of New York City has issued their Catalogue 341 The Twentieth Century. That describes the publication dates for what is to be found, but leaves a wide opening for the type of subject matter. Fortunately, the catalogue is divided into four sections, and that tells us what sort of material is to be found. Those topics are Art, Architecture, Photography, and Design. In other words, you will find items with an artistic bent here. They go from occasionally more traditional, to much on the cutting edge, such as it was at various times in the century. It ranges from beauty, to the strangeness of surrealism, to the pedestrian made pretty (Soviet Union art), to the downright ugly art of Nazi propaganda. Art can be used for many purposes. Here are a few samples from this collection.

There were few times as vibrant and revolutionary as the 1960s. Much of the creativity in various art forms was coming out of New York City. Here is the book that chronicles those times as they were taking place, New York: The New York Art Scene. The writer of this book was Alan Solomon, and it contains around 500 photogravure plates by Ugo Mulas. The publication date came right in the heart of the era – 1967. Photographs were taken of the "scene" and in the studio during visits by artists perhaps even better known today, including Marcel Duchamp, Andy Warhol, Roy Lichtenstein, Jasper Johns and many others. Certainly, they are more respected today if current prices for their work is the measure. This is where it all began. Item 23. Priced at $2,750.

No one from the era achieved quite the fame of Andy Warhol. A few cans of Campbell's soup and he was forever a major force in the world of art. Item 35 is The Philosophy of Andy Warhol (From A to B and Back Again), published in 1975. It contains his quotes on numerous subjects, including love, death, success, sex, fame, beauty, art and economics. As he did with a number of copies of this book, he inscribed it to a friend and added a rough version of his iconic drawing. This copy is signed to Arnold (Crane) and has a drawing of a Campbell's Soup can on the half-title. $2,500.

Speaking of Mr. Warhol, this next item is not a book or work of art of his, it is an entire collection. It consists of books and magazines, most containing some of Warhol's more obscure work. This covers most of Warhol's efforts as an illustrator, much of which is little known. There are 47 books featuring Warhol's work, often on dust jackets, along with 10 magazines for which he has drawn the covers. Dates range from 1951-2004, though obviously the latest one was drawn earlier than the cover date. Item 116. $50,000.

This is an exhibition catalogue for Internationale du Surrealisme which took place in 1947. It's title is Le Surréalisme en 1947. Organized by André Breton and Marcel Duchamp, it provided an opportunity for the pre-war surrealists to display their work now that the war was over. It features 24 prints, including color lithographs by Bauer, Ernst, Hérold, Lam and Miro, etchings by Jean, Maria, Tanguy and Tanning, a color etching by Bellmer, two wood engravings by Arp, and lithographs by various others. Most notably, this is one of the copies with the three-dimensional cover by Duchamp, rather than a photographic reproduction of it. Duchamp created a three-dimensional woman's breast to be placed on the cover, with an invitation (in French) to please touch. He wished to make the work appeal to more senses than just sight, and picked a perfect object to entice at least his male visitors to use their sensation of touch. Duchamp used foam rubber to build the breast, and while most have deteriorated with age (it is 71 years old now), this copy has aged virtually not at all, looking almost as good as if it were still 1947. Item 7. $55,000.

Item 42 is a book of fantastic architectural renderings from a most unlikely source. The title is Arkhitekturniie Fantazii (architectural fictions). It is the work of Yakov Chernykov and was published in 1933. Chernykov was in the wrong place at the wrong time. His creations are colorful and futuristic. Some of his concepts would come to fruition many years later, but this was sort of space-age design in the time of the automobile. His designs were not only exciting but colorful, which placed him not only in the wrong time but in the wrong place. This was the Soviet Union, where gray, boxy functionality was the way, consistent with conformity and a need for great economy. Fortunately, it didn't get him into notable trouble during the Stalinist era; it just got him ignored. That's a shame. It was one of the most exciting architectural design books of the twentieth century, though it arose from one of the dullest places imaginable. $12,500.

The last item was a beautiful creation from an ugly place. This next one is a hideous publication from an even uglier place. Art does not always equal beauty. The title is Entartete Musik (degenerate music). The music wasn't degenerate. The people who produced this were. This is Nazi propaganda, published in 1938. The cover displays an ugly, stereotyped big-lipped black man playing a saxophone, incongruously with a Star of David pinned to his coat. The background is red. It manages to attack Blacks, Jews, and Communists, all in one image. It shows portraits of writers of "degenerate music," such as Jews Arnold Schonberg and Ernst Krenek. Paintings by Paul Klee and Carl Hofer are added with the caption, "degenerate art and degenerate music hand in hand." This pamphlet was the work of Hans Severus Ziegler and was published in conjunction with a "Degenerate Music" exhibition he was promoting. Ziegler was an early follower of Hitler, who held positions of some significance in the Nazi Party. He was a virulent racist, a heavy promoter of anti-Semitism, whose hatred of jazz music led to similar attacks on black people. Item 37. $7,500.