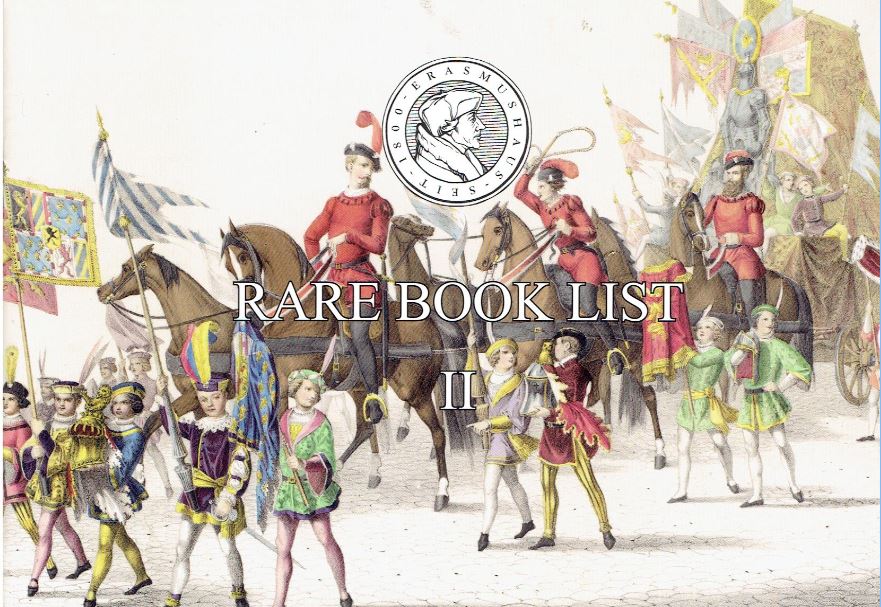 Erasmushaus has issued their Rare Book List II. It contains books that are rare and mostly very old, European in origin, with many featuring fine bindings. Languages are as you might expect from a Swiss bookseller - Latin, French, German, Italian, and some in English. Be prepared for older styles of English, though among the more recent items we find a couple of books by Charles Darwin. It is a collection well-suited for the antiquarian, with a few examples of what you will find to follow.

We begin with Philosophia Magnetica..., one of the earliest works on electricity and magnetism, a first edition, first issue published in 1629. The author was Niccolo Cabeo, an Italian Jesuit philosopher, mathematician, and teacher. He was also the direct follower of William Gilbert, the pioneer in the study of electricity and magnetism, with whom he had his differences of opinion. While he disagreed with Gilbert that the earth is a large magnet, he did study the connections between electricity and magnetism. He first discovered that electricity can be repulsive as well as attractive. The woodcuts include the first representation of a magnetic field, and it contains a world map, which shows the Americas and Terra Australis Incognita, the mythical huge southern continent at one time presumed to exist. Item 8. Priced at CHF 13,000 (Swiss francs, or approximately $12,965 U.S. dollars).

Next we have a book from Henri de la Blanchere, La Peche et les Poissons (fishing and fish). La Blanchere had two major fields of study. He was a naturalist, ichthyologist in particular, and a photographer in what was still an early time in the field. This book, published in 1868, combines both of these. La Blanchere was one of the earliest French naturalists to apply photography to natural history, and with astronomer Hervé Faye produced the first photographs of the sun in 1855. The beautiful color plates were lithographed from La Blanchere's photography. This copy has the imperial coat of arms of Russian Tsar Alexander II on the binding. It is a deluxe copy and was likely bound for Alexander. He ruled Russia from 1855 until his assassination in 1881. Item 34. CHF 3,800 (US $3,795).

Here is an early English farming book, An olde thrift newly revived. Wherein is declared The Manner of Planting, Preserving, and Husbanding yong Trees of divers kindes for Timber and Fuell. And of sowing Acornes, Chesnuts, Beech-mast, The Seedes of Elmes, Ashen-keyes, &c. The writer was Rooke Churche, the King's Surveyor, and it was published in 1612. He describes methods of cultivating trees, and advocates planting trees in such unused spaces as commons, waste grounds, and decaying forests. Item 9. CHF 1,800 (US $1,800).

Next is a magnificent book, actually eight volumes (bound in seven) published 1779-1793. It is about butterflies, titled, in French, Papillons d'Europe, peints d'apres nature. The primary author was Jacques-Louis-Florentin Engramelle, an Augustinian monk. The work was commissioned by Jean-Baptiste François Gigot d'Orcy. Gigot d'Orcy was a very wealthy man who amassed a huge collection of insects and minerals. His wealth and service as a receiver general of finances would ultimately be his downfall. He was executed by the guillotine in 1693, during the worst days of the French Revolution. In happier times, he was able to commission this work using the specimens in his collection. While Engramelle did the writing, a sizable number of artists were employed to create the illustrations. Over 3,000 illustrations were drawn, with Jean Jacques Ernst engraving the plates. Only 250 copies were made, mostly by subscription. Subscribers included the Kings of France, Sweden, and Spain, and other notables such as the naturalist Buffon. After Engramelle was reassigned, the writing was completed by Arnould Carangeot, a mineralogist and naturalist. This copy contains 350 plates, all but three hand-colored. That is all of the plates produced through 1792, with a few coming later, but delayed by the Revolution. This copy belonged to, and was bound by Elizabeth Beauclerk, Countess of Pembroke. She also died in 1793, at the age of 26, explaining why her set did not include the final plates. However, she lived in England, so we can presume she did not die under the same circumstances as Gigot d'Orcy. Item 19. CHF 48,000 (US $47,895).

This is an appropriate item for an Erasmushaus catalogue. Item 31 is a broadside full-length portrait of Erasmus. Erasmus was the great 16th century Catholic theologian, who sought reformation within the Church, not outside of it. This is a rare first issue of the portrait by Hans Holbein the Younger, published in 1540, four years after Erasmus died. Both Hans Holbeins were artists, the Younger also being a printmaker. He served as King's Painter to Henry VIII, a potentially dangerous job considering Henry's penchant for executing his associates. Several of Holbein's patrons were executed, but he lived long enough to die of natural causes in 1543. However, he was not exclusively the King's Painter. In the Younger's younger days, he worked in Basil, and returned their a few times, including in 1538 when he likely was commissioned to paint Erasmus. Though now mostly painting reformers, Holbein and Erasmus had been friends, the latter supporting his career. CHF 4,500 (US $4,490).

The Charles Darwin books are among his later works. They were considered by his son, Francis, as some of his most important works, but less readable for laypeople. Item 11 is The Effects of Cross and Self Fertilisation in the Vegetable Kingdom, published in 1876. Item 12 is The Power of Movement in Plants... The second one, published in 1880, was assisted by Francis Darwin. Priced at CHF 5,400 each (US $5,390).