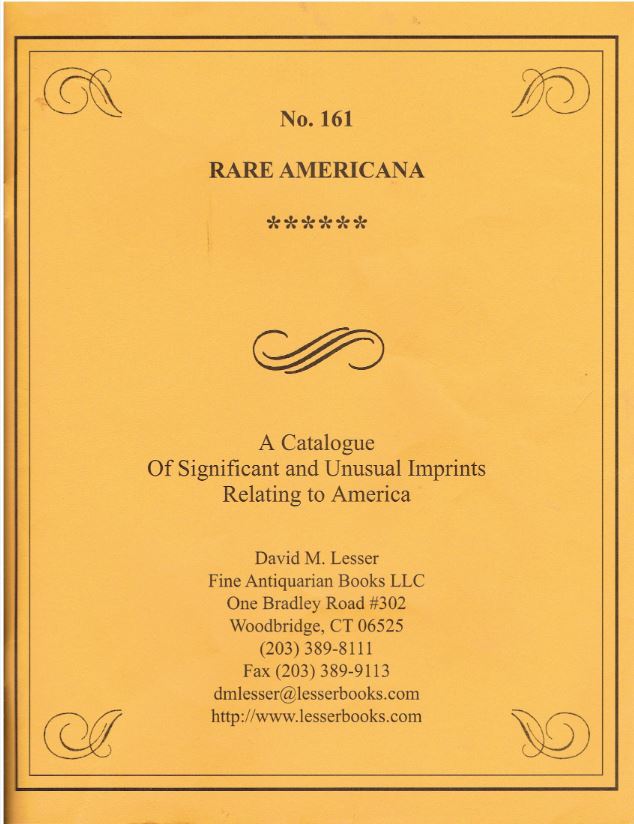 David M. Lesser Fine Antiquarian Books has published their Catalogue 161 of Rare Americana. It consists primarily of pamphlets, brochures, broadsides, manuscripts, lithographs and such of early Americana. Politics and religion are the most common topics (these were the days before football), but we find many others, including railroads, crime and other legal matters, women's rights, slavery and abolition, temperance, Indians, almanacs, and more. Here are a few selections from this latest catalogue.

We begin with an account of a horrific murder, Trial of Allen C. Laros, at Easton, Pennsylvania, August, 1876: for the murder of his father, Martin Laros, by poison, and his defence, based upon the allegation of epileptic insanity. Allen Laros did not just murder his father. He poured a large amount of arsenic in the family coffeepot. It killed not only his father, but his mother and another relative living in the house. His two brothers and two sisters also became quite ill but survived. Laros had stolen $330 from his father and the other relative, and in a confession admitted he wanted to be free to do as he pleased with the money. With the confession in hand, his lawyer pleaded epileptic insanity, that he blanked out and did this all unknowingly. It was a clever argument, but not clever enough to convince the jury, which convicted him and sentenced Laros to be hanged. There is more to the story that came after this pamphlet was written. Laros' lawyer did better on appeal, convincing the court he was insane. The conviction was changed to insanity and he was committed to an asylum. Three times, Laros escaped, eventually making it from Pennsylvania to Arkansas. It took six years before he was finally located and returned. A later newspaper report said he asked to be hanged rather than return to the asylum, but I have not been able to determine what happened next. Item 82. Priced at $500.

The battle for women's right to vote was a long fight, waged for a century. For all the effort expended, the problem was really quite simple. It was succinctly described in Opinions of New Hampshire Men and Women. Compiled by Miss Mary E. Quimby, Concord, N. H. in 1890. She compiled the thoughts of many types of people who favored woman suffrage, including educators, clergy, and public officials. One quote explains, "Woman is denied the right of suffrage simply because man has the power to deny it, and for no other reason whatever." She got that one right. Item 118. $450.

Here is a broadside, issued in the heat of a political battle, that also got it right. Headed To The People Of New-Hampshire, it was published by the Fremont Republican State Committee. John C. Fremont was the first and unsuccessful Republican presidential nominee in 1856. It describes "the deceptive statements and desperate falsehoods of the Opposition" and other typical political fodder. However, it does includes a descriptive prediction concerning outgoing President Franklin Pierce, that history has essentially endorsed. It says, "that recreant son of New-Hampshire, Franklin Pierce, the aider and abettor of their atrocities, will go down to posterity a shame and a reproach." Item 60. $500.

For those of you living in those big coastal cities where you no longer can afford to live, there is a better place, with cheap land. This brochure was printed in 1885, but the land is still relatively cheap, though I'm not sure it is still the most talked and written about section of the country any more. Item 31 is headed, Take One! Facts About The World's Garden Spot, Southeastern Dakota. "World's Garden Spot" might be a bit of hyperbole, but it is a place noted for its agriculture. It was published by the Chicago and Northwestern Railway, and they were ready to take you there. The brochure contains a timetable and rates. $500.

Captain Jack may not be as well known today as his friend Buffalo Bill, but back in his time he was another voice of the West, with a bit of Bill's aggrandizement. He even worked in Bill's show in its earliest days, but they quickly broke up and Jack developed his own career. Rather than running a complete show, Captain Jack Crawford went on the lecture circuit, and he brought out the crowds who could listen to him spin his yarns for hours. Like Bill, Jack served as a scout, but rather than also being a buffalo hunter, he was a correspondent for newspapers, one in Omaha, and later for the New York Herald. He was known for his daring rides bringing news from the frontier back to the newspapers. Jack became particularly enamored of mining, but though he was a spellbinding lecturer and popular poet to boot, he never made much from mining. He became familiar with it from the Black Hills of Dakota in 1876, but this piece pertains to the Alaska Gold Rush of 1897. It is a broadside, headed, This is Not a Lecture. But a Budget of Jewels, Sparkling, Pathetic, Humorous and Original. Captain Jack Crawford, "The Poet Scout," in His Wonderful Entertainments...Recitations of His Own Quaint Poems. Thrilling Stories of Life in Camp and Field...Two Hours of Rare Enjoyment. Nothing Like Him Ever Seen Before. Nothing Like Him Will Ever Be Seen Again. Sorry, but you will never see anything like him. This performance was to be held on December 30, 1897, in Granville, New York. Along with entertaining the folks, Captain Jack was promoting "The Capt. Jack Crawford Alaska Prospecting and Mining Co." Item 2. $375.

Next we have a rogues gallery, quite literally. It is titled Escapes from the California State Prison at San Quentin. Issued November, 1916. It contains mug shots, front and profile, and descriptions of various gentlemen who did not enjoy their stays as guests of the state. All escaped, and the descriptions include the size of the rewards for their capture. Crimes included larceny, burglary, robbery, sex offenses, manslaughter, assault to murder, and murder. Ages ranged from 18-53. There were 16 of them, three foreign-born, most from the western states. We don't know what happened to most, but one, who killed his love interest, was finally tracked down in 1929. He killed himself as the sheriff was closing in. Item 124. $500.