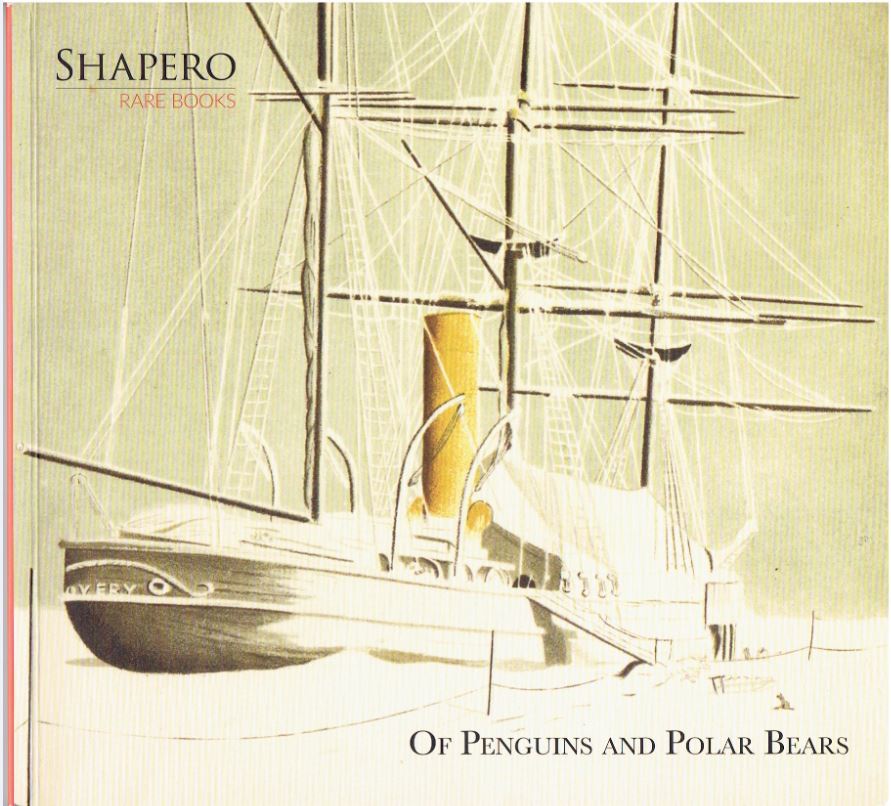 Shapero Rare Books has issued a catalogue Of Penguins and Polar Bears. It shouldn't take too long to figure out what this is about. It is not so much about those particular species, but of their habitats. Penguins live in the Antarctic, polar bears in the Arctic. Indeed, this catalogue is divided into two sections, Antarctic and Arctic. Mostly what we read about are the human penguins and polar bears, those intrepid explorers who bundled themselves up and went out into the great white unknown. Many never made it back, but that never quenched the spirit of adventure. Here are a few items from the far north and the far south.

Norwegian explorer Roald Amundsen had already made a name for himself discovering the fabled Northwest Passage a few years earlier when he headed far south. Amundsen had hoped to be the first to reach the North Pole, but when Peary apparently reached that destination before he had a chance, Amundsen turned his attention south. He would be first to reach the South Pole, though first he had to win a race against Englishman Robert Falcon Scott. That he did on December 14, 1911. Amundsen was more experienced than Scott, had superior equipment, knew better how to lay out supply caches, and make the most of dogs and sledges. He also was favored with milder weather. Item 1 is Amundsen's account of his journey, The South Pole. An Account of the Norwegian Antarctic Expedition in the "Fram," 1910-1912. Priced at £3,750 (British pounds, or about $5,230 in U.S. dollars).

Amundsen's competitor, Scott, did not have anywhere near as smooth a journey. He, too, made it to the pole, only to find the Norwegian flag already implanted. From there it got worse. The weather turned bitter and stormy, and not being as well equipped, Scott and his two companions were unable to make it back. It would take almost a year to find their bodies. One of those who located them was Apsley Cherry-Garrard, a young man with a substantial inheritance who talked his way onto the mission as an assistant zoologist. Cherry-Garrard experienced a mission comparably terrible to the one that took Scott's life. He and two others were sent on a side trip to bring back emperor penguin eggs. They hit terrible weather, and while Cherry-Garrard was able to make it back to their ship, his two companions did not. He wrote about their journey in 1922 in the aptly titled, The Worst Journey in the World. Antarctic 1910-1913. George Bernard Shaw wrote of his account that he was "able to describe it so effectively that the reader forgets how comfortable he is in his arm-chair, and remembers the tale with a shiver as if he had been through it himself." Item 10. £4,500 (US $6,291).

Much of our knowledge about the Arctic came from missions with specific goals. One was to find a Northwest Passage that would allow for direct shipping from England to Asia by going almost due west, rather than taking the long and treacherous route around South America. The other was the less practical but challenging goal of reaching the North Pole. However, there was one other mission that perhaps yielded the most information of all. That was the dozens of attempts to find the lost mission of John Franklin. Most were unsuccessful, but brought back much information about the Arctic. Franklin left England in 1845 and was never heard from again. It would not be until 1859 that his fate was finally determined when relics from his journey were discovered. There were no survivors. When the Admiralty threw in the towel and decided it was pointless to search any longer, Lady Franklin financed several missions in hopes of finding her husband. It was one of these that determined the outcome, when the log book, diaries, and other artifacts were found. That mission was headed by Francis M'Clintock, who had participated in two of the earlier unsuccessful searches. His account is found in A Narrative of the Discovery of the Fate of Sir John Franklin and his Companions, published in 1859. Item 63. £450 (US $629).

One of the most important figures in Arctic exploration was Sir John Barrow, though he never explored the region himself. As a young man, he participated in journeys to China and South Africa, but on returning to England in 1804, he took on the position of Secretary to the Admiralty, where he would remain the next 40 years. It was in this position that he became a great promoter of Arctic exploration, including a hoped finding of the elusive Northwest Passage. In 1818, he published this book recounting historic voyages in the area: A Chronological History of the Voyages into the Arctic Regions; Undertaken Chiefly for the Purpose of Discovering a North-East, North-West or Polar Passage between the Atlantic and Pacific... It traces explorations from the earliest Scandinavian voyages to the then recent ones of Ross and Buchan. His purpose in writing this book was to encourage the Admiralty to sponsor new ones. Barrow proved successful in his aims as he would oversee 13 more expeditions over the next 30 years. Item 46. £1,350 (US $1,885).

Next we have a collection of three broadsides, printed in Alaska before any books were. They were printed at Alaska's far northern tip, Point Barrow, named after the previously mentioned promoter of Arctic exploration. They were printed on board H. M. S. Plover, which spent two years at Point Barrow, 1852-1854. It was part of the Franklin search expeditions, the first, leaving England in 1848. Two of the broadsides are headed, Arctic Expedition in Search of Sir John Franklin. One says the natives are not unfriendly, but should be dealt with cautiously. The other was intended to be given out to the natives. It was hoped they would pass them along to others along the coast until they eventually reached other search ships. The notice would tell them where the Plover was located. The third is headed, Great Novelty! It is intended to open this season with a Native Dance which will take place on board Her Majesty's Ship Plover, at Point Barrow, Thursday Next... Undoubtedly, the crew could have used some entertainment through the long days and months in isolation, but the purpose for this event, as explained in the notice, was to engender good will, so that the natives would treat members of the Franklin and its search parties kindly. Item 38. £36,000 (US $50,336).