More from the Civil War from the George S. MacManus Company 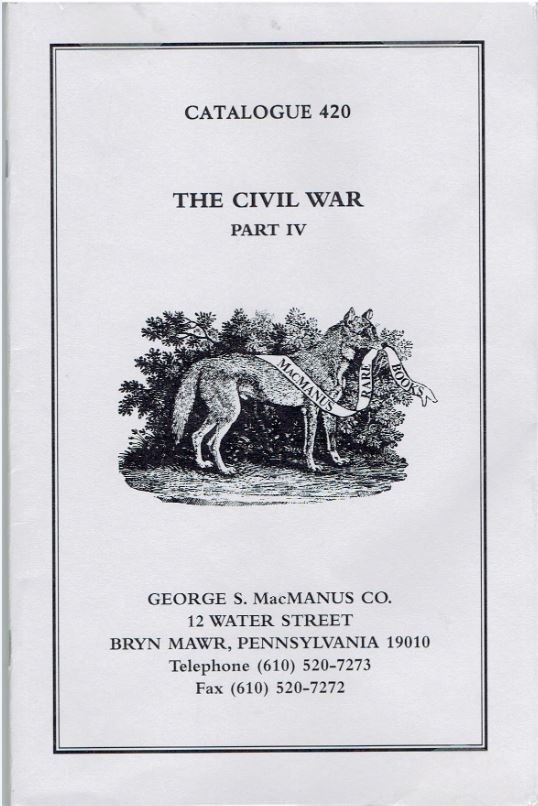 The George S. MacManus Company has issued a new catalogue on The Civil War (Part IV). MacManus' Civil War catalogues provide an enormous amount of material, much of it obscure or from small editions. We won't single out any, but there are numerous histories from individual regiments, both from the North and South. There are many personal accounts from soldiers who experienced the war from the most basic, and terrible of positions - foot soldiers who survived the carnage on the ground. Others come from prisoners of war. Those who served as "guests" of either side were not pleased with their accommodations. They did not rate even one star. Other accounts are biographies of those who were commanders, generals and other officers, or those from the civilian side, right up to Lincoln and Davis. There appears to be a bit more written from the Confederate side, but perhaps that shouldn't be surprising. For the North, the war was a necessity to preserve the union. Once the mission was accomplished, they moved on. The South did not move on so easily. The cause may have been lost, but it burned on for decades, still does, though not quite so intensely anymore. The South never completely got over it. Here are a few items from this latest MacManus Civil War collection.

Georges Fisch was a 19th century clergyman, a Swiss-born French Protestant Evangelical minister. He was also an advocate of freedom, within and without the church. Fisch spent 9 months in America in what would seem to be a journey of terrible timing, except for that timing being deliberate. Item 32 is his account, Les Etats-Unis en 1861 (the United States in 1861), published the following year. The well-respected clergyman finds the U. S. a vibrant place, but one without the maturity of Europe, it being barely a century old. His focus is notably on slavery, he being a strong abolitionist and very much on the North's side in this battle. Priced at $250.

There wasn't a lot of side switching during the Civil War, particularly at higher levels of the military, but here is an exception: Address of Brig.-Gen. E.W. Gantt, C.S.A. First Published October 7, 1863 at Little Rock, Arkansas. Gantt was a prosperous Arkansas slaveholder at the outbreak of the war, elected to Congress in 1860. However, he was also an ardent secessionist, and rather than going to Washington, he rallied Arkansans in union-leaning areas to the Confederate side. He formed a regiment and was fighting for the Confederacy along the Mississippi when captured by Union troops. After a brief period in a northern prison, Gantt was freed in a prisoner exchange and returned to Arkansas, hoping to receive another command. It didn't come, and in the meantime, Gantt's views changed radically. He came to believe the cause was hopeless, and decided to slip back across the dividing line, surrendering to General Grant. He met with President Lincoln, and went on a speaking tour, helping to build morale in the war-weary North. At war's end, he returned to Arkansas, participated in the Reconstruction government, promoted the rights of former slaves, and headed the local Freedman's Bureau. His activities did not endear Gantt to many of his neighbors, and he received death threats and beatings until retiring in 1870. Item 172. $200.

John Goode was a Virginia lawyer and politician who witnessed a number of memorable events from his vantage point as a Confederate congressman. He wrote about them many years later in this 1902 account, War History. Hon. John Goode, jr. Personal recollections of Peace Conference in Hampton Roads, and last meeting of General R.E. Lee and President Jefferson Davis. The Hampton Roads Conference occurred in February of 1865, just two months before Lee's surrender. President Lincoln and Secretary of State William Seward went to Hampton Roads, Virginia, meeting with Confederate Vice-President Alexander Stephens and two others. Confederate defeat was inevitable by this time, so the South had limited leverage, but Lincoln still wanted to bring the war to a quick resolution, and in a manner that would restore the union with as few lingering issues as possible. However, Lincoln was firm that the terms of a peace restore one union, not some sort of arrangement between two countries. While the South's delegates were more amenable to compromise, Confederate President Jefferson Davis was not willing to cede independence, so nothing ever came of it. Goode would later go on to serve in the U. S. Congress and as Solicitor General in the administration of President Grover Cleveland. Item 251. $750.

Being a spy during the Civil War was a very risky business. Captured soldiers were sent to prison camps, but spies could be executed. Such was the case for one Sam Davis, a young man who went into spying for the Confederacy in Tennessee, a border state deeply divided during the war. He was captured in 1863 by Union forces and taken to Nashville, where the Union was in control. Davis was in deep trouble. A court-martial was quickly arranged and Davis was sentenced to be hanged. However, the Union commander offered him a way out - tell us what you know and we will spare your life. Davis declined. Union soldiers reportedly felt terrible about the situation, Davis being a principled young man, but the order was carried out, not unusual for spies at the time. He was soon forgotten, and would have remained so except a Confederate-sympathetic publisher got wind of the story 30 years later, and turned Davis into a hero to those who shared his sympathies. Davis became known as the "Boy Hero of the Confederacy," though he was 21 years old at the time he was executed. He was such an honorable young man that he became a perfect symbol for the Lost Cause. Item 388 is one of these later accounts of his heroic demise, written by Howard Hamil and published in 1911: Sam Davis; a True Story of a Young Confederate Soldier who was Hanged after Capture because he would not Betray a Secret of his Commander. $400.

The Civil War may remain in our national memory, but in time it inevitably had to fade from personal memory. Item 96 is a sentimental last look at the survivors from the South: The Last Parade. An Editorial by Douglas S. Freeman from “Richmond News Leader” of Friday, June Twenty-fourth Nineteen Hundred and Thirty-two, the Last Day of the Forty-second Annual Reunion of the United Confederate Veterans. The Confederate veterans, as did those from the Union side, held annual reunions, but as they aged, it became apparent those would soon happen no more. In 1911, 106,000 Confederate veterans came; in 1932, that number was down to 1,500, all over the age of 80. The veterans would continue to have meetings for almost two more decades, but no more big parades. Freeman nostalgically writes, "It is the rear guard, engaged with death, that passes now. Who that remembers other days can face that truth and still withhold his tears?" $350.