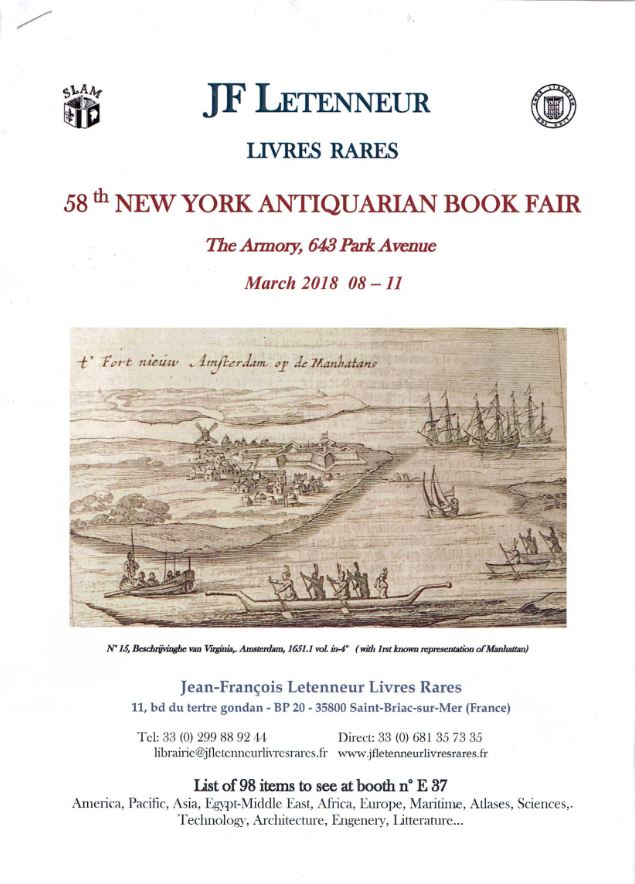 A catalogue for the New York Fair.

Jean-Francois Letenneur Livres Rares (rare books) printed a catalogue for the recent 58th New York Antiquarian Book Fair. As one might guess from their name, Letenneur is a French bookseller, located along the northwestern coast of Brittany, specifically, in Saint Briac-sur-Mer. Most of the material they offer is in the French language, with a smattering of other European tongues, English included. Nevertheless, there is much that will be of interest to collectors who focus on America. Letenneur specializes in travels, particularly the ocean-going sort which are primarily older books. This includes naval voyages along with charts, maps and atlases to help you find your way. French travel history is intimately tied to North America, ranging from early explorations of the continent to close allies during America's war of independence. Of course, there are also plenty of books for those whose focus remains in Europe, or on voyages to other parts of the world. Here are a few of these items, most of which are very old.

Writing an encyclopedia is a great enough challenge on its own, but how about writing one as a poem? That is what Gautier de Metz, a French priest, managed to accomplish. Of course, there wasn't quite as much knowledge to cover when he wrote it around 1246. Still, Gautier covers a lot of ground, his work being part fact, part fiction, though it is unlikely Gautier knew that dividing line in 1246. It ranges from creation and theology to the nature of the earth, cosmology, physics, all sorts of things, much borrowed from earlier authors (who can be blamed for many of Gautier's errors). He writes about the sky and the ether, how enormous it all is, and meteorological phenomena. Gautier gets particularly off track from reality with monsters in far off parts of the world, but people were still imagining such creatures several centuries later when they had better access to information than Gautier possessed. He does get it right about the earth being round, and is close when he says we don't fall off as we are held to the surface by magnetism. Item 14 is the only known copy of this French edition of Image du Monde, circa 1520-1530. It has a most interesting provenance. It once belonged to Ferdinand Columbus, Christopher's son. His father left him a healthy inheritance, including hundreds of slaves in the New World. Ferdinand compiled an enormous library for his time (even for ours), with over 15,000 books. He left it to a cathedral in Seville, but it was not well-maintained. An inventory in 1684 showed they only retained 5,000 of Columbus' books and that is now down to 2,000. Price on request.

Here is another early book related to Columbus. The title is Nova typis transacta navigatio novi orbis Indiae occidentalis... The author was the Benedictine Caspar Plautius, one of about a dozen missionaries from his order who accompanied Columbus on his second voyage to the New World. Though that occurred in 1493, this first edition (second issue) was not published until 1621. It was meant as something of a Catholic answer to the New World descriptions of the Protestant de Bry. The work combines some good information about plants and dress of the natives with claims as fanciful as those of Gautier. One of the images depicts St. Brendan celebrating mass on the back of a whale, an event we can safely say did not happen. Another has Indians riding a large sea creature. Others display a contempt for the native religions, showing Indians practicing cannibalism, and priests being martyred. It is not hard to see why so much cruelty was practiced on the natives when even the European religious figures viewed them so savagely. Plautius has generously dedicated this book to... himself! Item 24. $18,340.

There is nothing like a good friend when you're young, and France was such a friend to the Americans after they declared their independence. Of course, the French had some of their own reasons for this support. Item 1 consists of two unsigned manuscript memos written in 1777. A marginal note says "D'invault," possibly tracing this to Etienne Maynon d'Invault, Controller General for Louis XV. The writer expresses reasons why France should join the war on the American side. These are primarily for France's own economic self-interest, the memo encouraging France to become America's first economic ally before the British reach a peace with them and take over that role. It is likely that these memos were produced for the King or a member of his cabinet. $4,280.

Item 38 is a personal photo album documenting a trip to Egypt in 1892 by Count Helie de Durfort. It contains 100 photographs and one panorama. Forty-five of the photographs were taken by the Zangaki Brothers and Antonio Beato, who specialized in selling photos to Egyptian travelers. The other 55 were taken by the Count himself. De Durfort was a captain in the cavalry along with being an amateur photographer. He went to Cairo, traveled up the Nile, and saw many of the notable sights. There are views of such obvious sights as the pyramids, sphinx, cities, and river. Then, there are also pictures of ordinary people, boys washing clothes, girls carrying water, rowers along the Nile, and other scenes such as camels, oxen, streets, and the desert railway. The album has been titled on the cover, Egypt Le Caire Le Nile Fevrier 1892. $6,720.

This next book is from the Marquis de Sade, whose name evokes images of the worst sort, but this isn't the de Sade with whom most are familiar. This is not a tame novel, but it isn't like that one either. The title is, Aline et Valcour, ou le Roman Philosophique. Écrit à la Bastille un an avant la Révolution de France. That translates to Aline and Valcour, or the philosophical novel. Written in the Bastille before the revolution in France." De Sade spent much of his life in and out of prison. This novel was written while he was in the Bastille from 1785-1788. He emerged, and was close to having it published when he and his publisher, in the midst of the Reign of Terror, were carted off to prison again. De Sade survived; his publisher was guillotined. Finally, in 1795, the book was published by the original publisher's widow. This story, told through letters, concerns the young lovers of the title, Aline's sympathetic and virtuous mother, and her cruel and materialistic father. The differences are also seen in two kingdoms described, one in Africa, brutal, cannibalistic, and everything else terrible, the other a paradise in the South Pacific ruled by a philosopher-king. Item 95. $14,000.