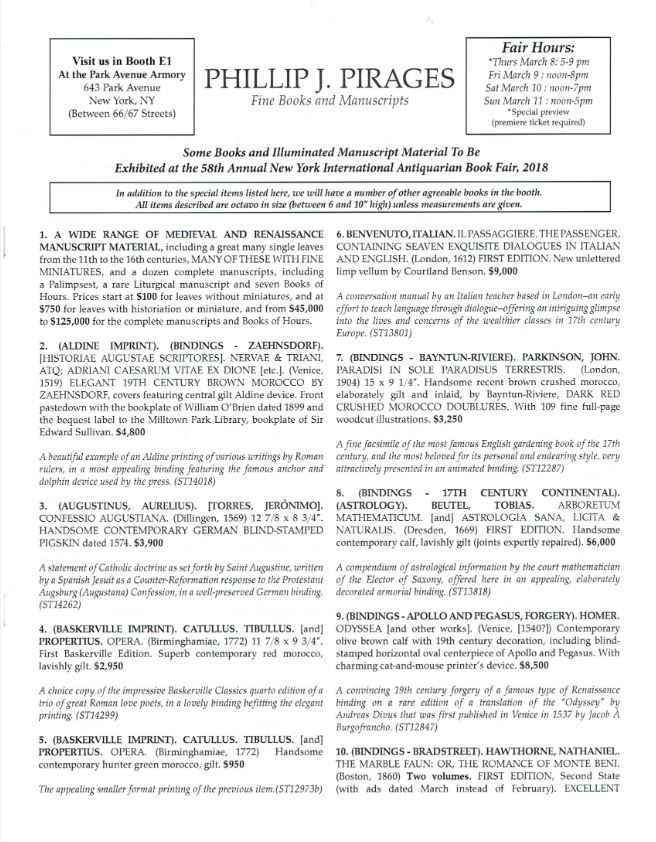 Phillip J. Pirages Fine Books and Manuscripts printed a listing of books for the recent New York Antiquarian Book Fair. This is not one of the spectacular catalogues for which they are known, but listings with brief descriptions. It is most appropriate for use by those attending the fair, who don't need illustrations as they can look at the books themselves. Nevertheless, illustrated listings or not, the books are the same, and this is an exciting collection of mostly very old works. They are easily worth a look.

Baroness Bettina von Hutten wrote a lot of romantic books early in the twentieth century They are not all that well remembered, but she was a noted and scandalous personality in her day. Despite that name, she was born in Erie, Pennsylvania, to a family that included a couple of American diplomats and the President of the Erie Railroad. Her father took her on sojourns to Europe, and on one of those, she met the Baron. They married in 1897, divorced in 1909. According to a newspaper report at the time of their split, the tall, beautiful "Pam," as she was known, "sings, paints, writes and is an accomplished musician." The Baron was a "plain, thrifty, matter-of-fact German." This was not a marriage made in heaven. Even she said he was nice, too nice a person for her. For the last seven years of their marriage, they spent only three months together. However, the article touchingly notes, "the Baron and she have always exchanged telegrams on anniversaries." Unfortunately, she was exchanging her affections with a tenor. She got no alimony and he was granted custody of the children. Thanks to her books, she had her own income. Item 12 is Our Lady of the Beeches, a 1907 edition noted more for its binding than its content. It was prepared by Cedric Chivers of Bath, England. It is vellucent (transparent vellum) covering a painting of a grove of trees with a sundial in the foreground. It is highlighted with mother-of-pearl inlays. Priced at $2,750.

Here is another work more notable for its press work and binding than content. That is not to say there is anything textually wrong with Robert Browning's Dramatic Romances and Lyrics, from 1899. It's just that the notable English poet had departed this world ten years prior to the publication of this edition, so it doesn't have much priority. What it does have are decorative borders and woodcut initials by Charles Ricketts, a notable artist, book designer, printer, typographer, and operator of the Vale Press. The binding comes from the Guild of Women Binders, in this case, Willa St. George Moore, who was a student of Annie MacDonald. The Guild was formed in 1898 by an English bookseller to promote the work of women binders. It only lasted for six years, but it served as a training ground for women entering the field and for showing their skills. Moore has used an ornate curling frame wrapping around the covers, with an image of a cavalier on the front cover, a Puritan on the back. Item 16. $4,500.

Now, if you want to take the level of decoration up a notch, here is a spectacular book for you. Actually, it is a set of four volumes. It is a Catalogue of the Collection of Miniatures. The Property of J. Pierpont Morgan, published 1906-1908. It is worthy of the collection of one of the world's wealthiest men. Pirages notes, "An immense and breathtaking production that perfectly represents the beauty and high aesthetic standards of the collection it catalogues and, by extension, the almost unimaginable luxury of Morgan's Gilded Age." This is No. 3 of 20 copies on vellum, intended for private circulation only. Along with a magnificent binding, it features 23 miniatures painted on vellum, along with 398 plates of miniatures in Morgan's collection. This copy contains the bookplate of Lessing J. Rosenwald, one of the greatest book collectors of the twentieth century, who gave thousands of great books to the Library of Congress and even more prints to the National Gallery of Art. Item 26. $55,000.

Next we have a treatise on a dreaded disease you don't hear very much about these days. Item 57 is Erotomania, or a treatise discoursing of the essence, causes, symptomes, prognostocks and cure of love or erotique melancholy, by James Ferrand, published in 1640. "Erotomania" is defined as a delusional disorder where one believes that a person of higher social standing or celebrity status is in love with them. We do hear of such people these days, though I was not previously aware of the term. Ferrand provides some treatments for the condition. $9,500.

John Rainolds had a sterling reputation in the academic and theological fields, but he probably wasn't much fun. In 1599, he published this attack on the theater, Th' Overthrow of Stage-Playes. Rainolds was a serious Puritan, not noted for being a fun-loving people. Rainolds was particulary offended by cross-dressing in the theater. This was a habit in the day as all the actors were male, forcing men to take on the roles of women. His offense was somewhat ironic as in his college days, he had portrayed a woman in a play, but he recanted his youthful indiscretion. In this treatise, Rainolds points to the Bible forbidding men to wear women's clothes. Rainolds was also highly concerned about the effect of plays on their actors and audiences. He believed watching improper behavior, even when depicted to show that bad behavior leads to bad results, would stir the passions of the viewers and lead them to similarly misbehave. Item 66. $7,000.