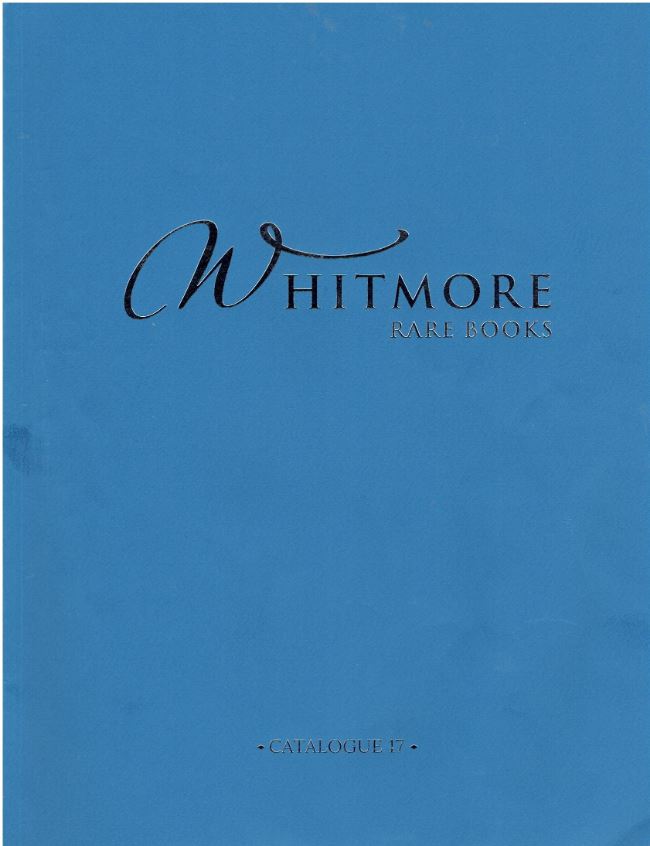 Whitmore Rare Books has released their Catalogue 17. There is not a specific title defining the type of material to be found, but we will give it a working title of fine literature. There is much in the way of fiction, some nonfiction, some poetry. It is filled with important works, and while the twentieth century is most represented, others go back as far as the sixteenth. Many copies come with author signatures or inscriptions. The condition of these books is generally as good as you are likely to find. Here are a few samples of what is offered.

We begin with the story that jump-started one of America's greatest literary careers. Samuel Clemens, who would write as Mark Twain, started his career as a riverboat pilot on the Mississippi. When the Civil War dried up river traffic, he moved to Nevada, tried his hand at gold mining in Nevada City, and when that failed, worked for the local newspaper. From there, he moved on to San Francisco, writing now his avocation. It was there that he wrote the title piece for this collection of short stories. It was published in a national weekly newspaper, and its popularity was such that it it led to this collection, The Celebrated Jumping Frog of Calaveras County, and Other Sketches, published in 1867. It relates an old miner's tale of a fellow miner who liked to bet on anything. When the miner claimed his frog could out-jump any other, another man said he did not have a frog with which to compete. The miner generously offered to find him a frog, and while he did, the stranger filled the miner's frog's mouth with buckshot. The outcome was preordained. That frog couldn't jump. Offered is a copy of the first edition, first issue. Priced at $10,000.

Next we have a story of life in Africa during the waning days of the colonial period. The title is Out of Africa, and the writer was "Isak Dinesen." That was a pen name for Karen Blixen, a Danish woman who moved to British East Africa, now Kenya, in 1913 to join her soon-to-be husband in developing a coffee plantation, not far from Nairobi. The first years went well enough, but it did not last. The marriage broke down, and after the divorce, she was in charge of running the farm. Then droughts came, coffee prices declined, and the debts mounted. In 1931, she was forced to sell, and moved out of Africa, back to Denmark, where she wrote and published this book in 1938. Item 12. $450.

This is the scarce first edition of a desert classic, Seven Pillars of Wisdom, by T. E. Lawrence, more commonly known as Lawrence of Arabia. Lawrence was serving with the British military in what is today Jordan during the First World War when the British decided it would be a good idea to join forces with Arab rebels. Arabia was then controlled by the Ottoman Turkish empire, which was aligned with Germany against Britain and its allies. Fighting an Arab revolt in their empire would force the Turks to pull troops away from the greater war effort. Lawrence worked closely with the Arabs in planning the revolt, which successfully threw off the Ottoman rule (to be replaced by European colonial rule - not part of Lawrence's plan). This first edition, the subscribers' edition, was privately printed in just 170 copies. Each came with a unique binding, being very costly to produce (Lawrence lost a lot of money on it). Other than an abridged version, Lawrence allowed no reprints during his lifetime. The book itself is part history, part adventure, an autobiography that covers more than just the life of T. E. Lawrence during the war. This copy is inscribed by Lawrence to his attorney, with his "apologies for the troubles it is going to bring him." Item 30. $87,500.

Paperbacks are not usually the most desirable of editions, but Whitmore has a selection of them from a personal collection that was quite special. Kurt Enoch was involved in the creation of several paperback publishers, including Signet, Penguin, and the New American Library. Enoch bet on the idea that people would appreciate affordable reading copies of great (and mediocre) books and won. For his own collection, Enoch had the writers inscribe their paperback editions to him. In the process, he developed a collection of over one thousand signed paperback books, with signatures from the likes of Faulkner, Capote, Nabokov, Rand, Tennessee Williams, and Henry Miller. Item 53 is the inscribed paperback of Erskine Caldwell's Tobacco Road: A Three Act Play. Published in 1952, this look at the extreme poverty of southern sharecroppers during the Depression became an enormously successful Broadway play. $750.

Next we will turn to poetry, an epic poem with an enduring opening - "A thing of beauty is a joy forever. Its loveliness increases, it will never pass into nothing." The poem is John Keats' Endymion, based on the mythical Greek romance between a young shepherd and the Moon Goddess. It is a tribute to their youthful beauty, but tempered by the fact that the Goddess would stay young forever, while the shepherd would grow old and die. Similarly, the poet will die too, but the beauty of his work lives on. Sadly, that would prove all too true for Keats, just 22 years old when this poem was published in 1818. Along with others in his family, he was stricken with tuberculosis, living only to the age of 25. His recognition as a major poet would develop after his lifetime. Item 26. $8,500.