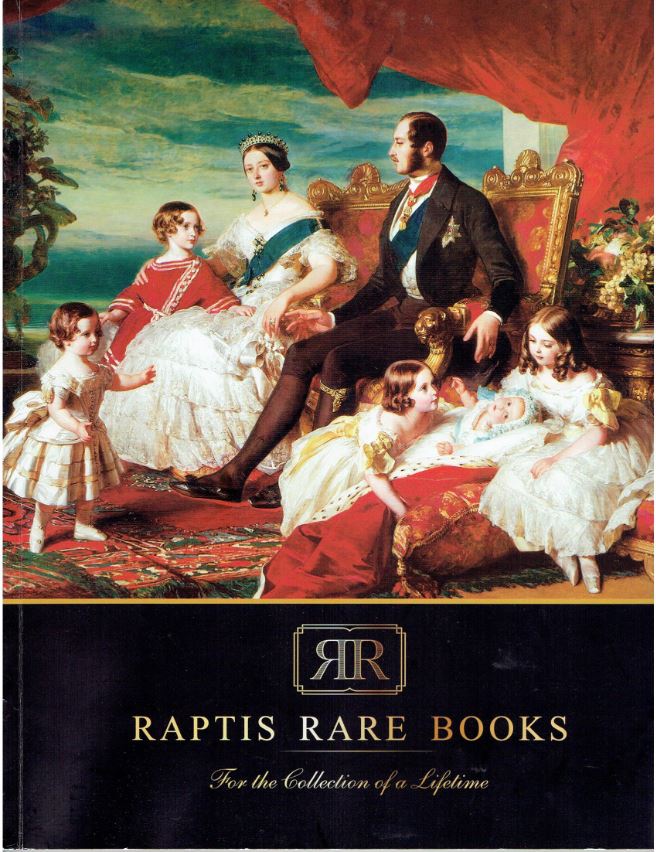 Raptis Rare Books has issued a new, unnamed catalogue. It contains a table of contents to let us know what can be found inside. Here is that list of topics: Featured Selections, Americana, Travel & Exploration, History & World Leaders, Literature, Science & Philosophy, Economics, and Children's Literature & Illustration. These are a few selections of what you will find inside.

We begin with a book that is made by its provenance. That is not to say it is not important in its own right. The book is East of Eden, which follows the lives of two California families. It was one of many great works by John Steinbeck. This was the personal copy of James Dean, with his signature on the front free endpaper. Dean's movie career was brief, but he came to symbolize the youthful rebellion (such as there was) of the 1950s, the rebel without a cause. The book was published in 1952, and the virtually unknown Dean was given a leading role when filming began on the movie in 1954. The film version, which tracks one of the two families in the novel, was released in 1955. Later that year, Dean lost his life in a car crash, just three movies to his name, but with a reputation that still survives. Item 71051. Priced at $20,000.

On June 6, 1944, the Second World War, now almost five years old, reached a decisive moment. Allied troops made their assault on the French coast, the route that would take them to Germany. The danger was enormous as German troops could fire at will from the highlands along the shore, but there was no easy way to land in Europe and defeat the enemy. On that day, President Franklin Roosevelt took to the airwaves and offered a prayer on behalf the troops on their terribly dangerous mission. Among the President's words were, "Success may not come with rushing speed, but we shall return again and again; and we know that by Thy grace, and by the righteousness of our cause, our sons will triumph." It may not have come with "rushing speed," but triumph they did. For Christmas of 1944, President Roosevelt had 50 copies of this D-Day Prayer printed in Gothic type with black, red, blue and gold, which he gave to close friends. This one belonged to John Boettinger, who, at the time, was married to Roosevelt's daughter, Anna. It is believed that Boettinger was closely involved with the writing of this prayer. Item 67012. $12,500.

Eleven months after D-Day, Roosevelt's prayer was answered. He did not live to see it. By the spring of 1945, Allied troops were advancing on Berlin. On April 30, Hitler killed himself. Soon thereafter, German troops outside of the country began laying down their arms. The Germans agreed to an unconditional surrender on May 7, and the following day, all fighting ceased. On that day, President Harry Truman issued A Proclamation. Truman read this proclamation on the radio, and then had three-color copies, which he signed, printed up as gifts to friends. It begins, "The Allied armies, through sacrifice and devotion and with God's help, have wrung from Germany a final and unconditional surrender. The western world has been freed of the evil forces which for five years and longer have imprisoned the bodies and broken the lives of millions upon millions of free-born men." Item 4419. $15,000.

Seventeenth century philosopher Thomas Hobbes was something of a transition between the authoritarian monarchies of earlier days and the free, democratic regimes that would eventually replace them. Hobbes believed in human rights, and promoted a social contract between the rulers and the people. However, he was not a democrat, believing in the authority of the sovereign, constrained by human rights, but not by election. Hobbes had little faith in the people to rule themselves, fearful of the selfishness of human nature. Hobbes' views were spelled out in 1651 (first edition, first issue) of Leviathan, or, The Matter, Forme, & Power of a Common-wealth Ecclesiastical and Civill. Item 25003. $17,500.

Here is an uplifting message from an amazing young lady who overcame the most impossible of challenging situations. When Helen Keller was still very young, an illness cost her both her sight and her hearing. Outside of touch and smell, it left her virtually isolated from the world. And yet, somehow through touch, and use of her voice, she was able to learn to communicate with the outside world. She would go on to become an inspiration to so many people, regularly giving speeches though she could not hear herself. In 1903, she published this book entitled Optimism. It describes her view of life and reveals her personal faith. This copy was signed by Keller. Yes, she learned to write too, her signature being neatly printed. Item 71029. $1,500.

This next item is an inscribed photograph from Gutzon Borglum. Borglum was a sculptor, best known for America's most famous piece of oversized sculpture - Mt. Rushmore. The photograph was taken while the project was in process. Though not complete, Washington's head is clearly visible. The others had not yet begun, although work on an aborted initial attempt to carve Jefferson's head to Washington's right can be seen. Borglum writes to New York financier William W. Fuller, "Greetings from our Gods in the mountains where they will watch our passing - and in time they alone - I fear will tell what manner of men we were." Item 79100. $4,500.