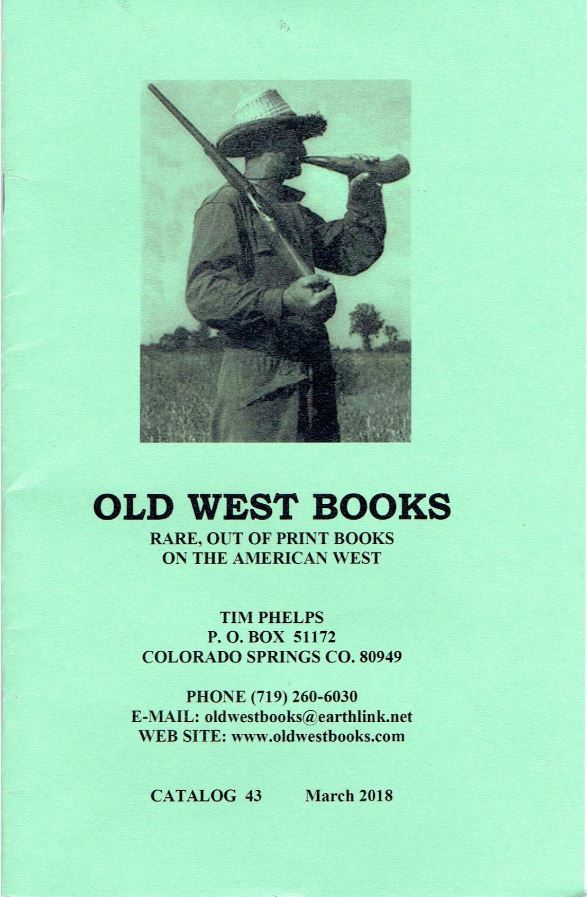 Old West Books has released their Catalog 43 of Rare, Out of Print Books on the American West. This is a new selection of obscurities and classics, a place where well-known names, such as Custer, Jesse James, and Sitting Bull, can be found alongside those less well-remembered, such as Frank Rande and Oklahoma Charley. Lawmen and outlaws battled, soldiers forced the native population into smaller and smaller enclaves, cattlemen drove herds across the plains, and the railroads came, opened up the land, and settlers followed. With that, the Old West faded away, but it is still remembered in the books found in this catalogue. Here are a few.

We begin with a biography of a famous outlaw, by his namesake son. Item 49 is Jesse James My Father. The First and Only True Story of His Adventures Ever Written, by Jesse James, Jr. James, Jr., explains that he wrote this book to set the record straight, that not a single other account of his father was accurate. "I have read them all, and there is not one of them that did not do cruel injustice to the memory of my father and to his family. In none of these books, and in none of the thousands of newspaper articles that have been written about him, have I seen him credited with having in his nature any of the human attributes of kindness, charity or honesty of purpose." While his father was often away, and invariably heavily armed, Jesse James displayed those aforementioned attributes to his family and friends. Jesse, Jr., says his father could often walk around in public, and though recognized by friends, none ratted on him despite the $20,000 reward. In the second half of the book, James, Jr., recounts his own case of being accused of train robbery. He was acquitted. This is the 1906 edition of a book first published in 1899. Priced at $60.

Jesse James got his start with Quantrill's Raiders in Missouri, a group of former Confederates who seamlessly moved from last ditch supporters of the lost cause to criminals supporting their own personal interests. From the Raiders emerged the James-Younger gang, Jesse and his brother, Frank, and the three Younger brothers. Jesse was shot down in 1882, Frank was acquitted of murder, but the Younger brothers ended up in prison. The writer of this book, W. C. (Wal) Bronaugh spent 20 years of his time and his own money to free them. The title is The Youngers’ Fight for Freedom: A Southern Soldier's Twenty Years’ Campaign to Open Northern Prison Doors, With Anecdotes of War Days, published in 1906. Bronaugh saw the Youngers as fellow Confederates, "last relics" of the Civil War imprisoned, though it was their later deeds that put them in jail. Bronaugh's persistence eventually paid off. It was too late for Bob Younger, who died in prison, and Jim Younger killed himself the following year, unable to cope with the outside world. Cole Younger, however, managed to live a normal life, at one point touring in a "Wild West" show with Frank James. Item 14. $165.

This next one is what Old West calls "The 'Holy Grail' of Custer / Indian War Books." It is My Life on the Plains or Personal Experiences With Indians, a first edition, second issue published in 1874. It describes Custer's experiences with Indians prior to the one for which he is remembered. This is a significant Western book, but not just any copy is a Holy Grail. This one is because it has been signed by Custer, "With the Compliments of G. A. Custer BVT Major General U. S. Army May 14th 187_. That could be 1875 or 1876. If 1876, it was barely over a month before his demise. Tim Phelps of Old West writes that he has never seen a signed copy for sale in over 20 years of searching and is only aware of four signed copies in existence. In this catalogue, he recounts the tale of first hearing about this copy, and the adventure involved in getting it. Item 26. Price on request.

Oklahoma Charley, whoever, if anyone, he was, sounds like an entertaining character. I can find nothing on him, so perhaps he was a fiction. Item 46 is Oklahoma Charley, Miner, Cowboy, Corndoctor, Indian Scout, Invalid, Prospector, Polygamist, Horsetrader, Snakecharmer, Book-agent...and Booze Fighter, by Marion Hughes, published in 1910. A contemporary advertisement says it "will split your sides with laughter." Western bibliographer Ramon Adams was not so kind, calling it "ridiculous" and "drivel." Whichever, it is rare. There is only one way to find out who is right. $600.

This rare pamphlet contains nothing but the truth. We know this because the author and publisher emphatically say so. No Oklahoma Charley stuff here. The title describes it well: Real Life on the Plains! Written by Capt. S. S. Van Sickel, During a Short Period of His Life on the Plains, Giving an Account of Some of His Experiences with the Indians and His Narrow Escape from Death During one of the Severest Storms Ever Known on the Plains. During this Storm His Comrades all Died, and He Alone Made His Escape! With the Loss of Nearly all His Fingers, as you will see when he Presents to you this Book; Also the Loss of Portions of His feet, Which is More Severe than the Loss of His Hands, Since Which Time He has been Unable to Perform Manual Labor... This is not a Novel, but a True Story of the Author's Own Experience! Written Wholly by Himself, and he Vouches for the Truthfulness of Every Word Herein Contained, Using as Few Words as Possible to Give Facts. The first word in this story is "In," and like every word in this story, it is truthful. This is the 1885 edition of the rarity first published in 1875. Item 87. $1,750.

Item 61 is Life Among the Sioux Indians, by Cicero Newell, published in 1884. Newell was a U. S. Indian Agent, and he includes sketches of various leaders, such as Sitting Bull, and gives descriptions of Sioux life. Most notably, a woodcut on the back cover depicts the aforementioned General Custer's final battle, while Newell's commentary inside is brutal. Newell says, "Had Custer obeyed orders and waited until the command all came up, they could have forced the Indians to come in as prisoners, and thereby ended the Sioux war. But his haste to get all the glory of killing these people, led him to make the attack against the orders of his superior officers." Newell says the Indians are portrayed as murderers, when all they were doing was defending their women and children. He concludes, "Custer found a camp of women and children on the Wichitaw Creek some time before, where he murdered over 300 women and children, who had no one to defend them." This refers to what is politely known as the "Battle of Washita River," or not so politely as the "Washita Massacre." $2,750.