Canadiana (and some Americana) from Patrick McGahern Books 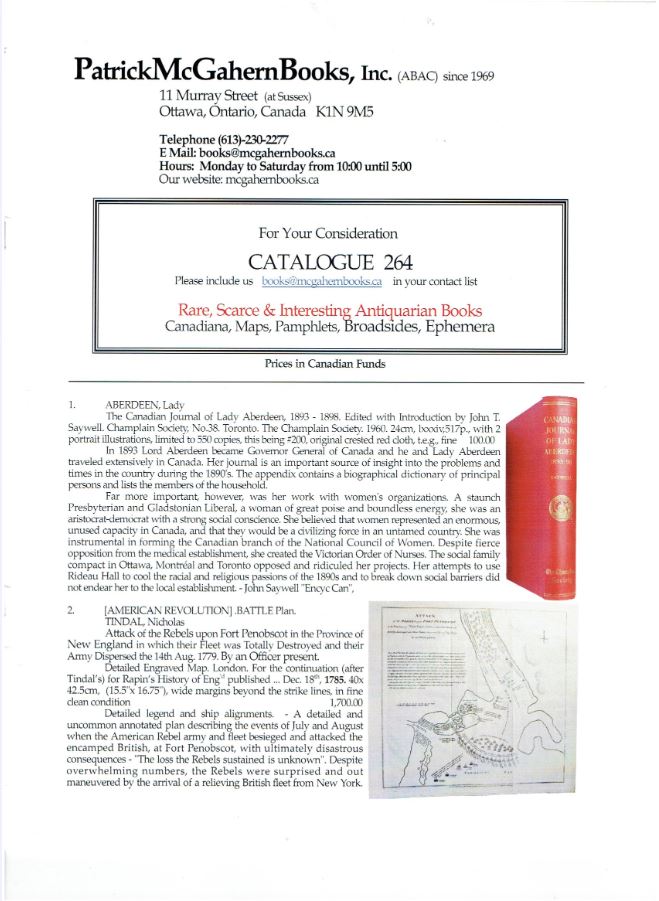 Patrick McGahern Books has published their Catalogue 264, Canadiana, Maps, Pamphlets, Broadsides, Ephemera. Most items relate to Canada, although there is an account by the U. S. Bureau of Ethnology concerning the Ghost Dance of 1890 and the Wounded Knee Massacre ("Sioux Outbreak") that arose from it. And then, the Salem Witch Trials were an American event Canadians wouldn't much want to be associated with either. Here are a few of these items which mostly come from the northern side of the long, unfenced border.

Here is another item from the American side of the border. The American Revolution was a great success for the Americans, but not every battle went as planned. Here is a large battle plan (15.5" x 16.75") for one of the rebels' worst defeats. It took place fairly close to Canada, at Penobscot Bay in Maine. It is known as the Penobscot Expedition, which took place in the summer of 1779. The British were attempting to set up a colony, to be known as New Ireland, in the area, a location from which they could harass New England shipping. The Americans decided to put an end to the plan. They sent a flotilla of 44 ships plus 1,000 men. The mission was under the command of Dudley Saltonstall, and included 100 infantryman commanded by Paul Revere. The Americans far outnumbered the British, but were badly routed. Saltonstall dawdled, fearful of casualties, and did not react until the British Navy had time to send reinforcements. It was too late. The Americans attempted to flee up the Penobscot River, finally burning or otherwise destroying their own ships to avoid their capture, and were forced to return to Boston overland, despite a lack of food and supplies. Saltonstall was dismissed from the Navy for incompetence, while Revere is revered for other things. Item 2 is a chart showing the placement of ships at the battle site and including a description of events. It is headed, Attack of the Rebels upon Fort Penobscot in the Province of New England in which their Fleet was totally destroyed and their Army dispersed the 14th Aug. 1779. Priced at CAD $1,700 (Canadian dollars, or approximately $1,325 U.S. dollars).

This next item connects, or doesn't, the U. S. and Canada. In 1974, Canadian Prime Minister Pierre Elliot Trudeau was invited to receive an honorary degree from Brandeis University in Waltham, Massachusetts, near Boston. Brandeis is a highly prestigious and competitive university, and the only way most of us could get a degree from it would be if they offered us an honorary one. Trudeau was evidently not so impressed. Item 5 is a typed letter signed by Trudeau dated December 2, 1974. Trudeau writes to the President of Brandeis, "I am honoured to be invited to receive an honorary degree from Brandeis University... Although your invitation is a most attractive one, I regret I am unable to accept it. Because of my many commitments at that period..." CAD $400 (US $311).

Item 35 is an account of one of (actually two of) Canada's most notable internal expeditions. The title is Voyages from Montreal, on the River St. Lawrence, through the Continent of North America, to the Frozen and Pacific Oceans; In the Years 1789 and 1793. The author/explorer was Alexander Mackenzie, and the reason he took two trips was that he missed his target on the first. Mackenzie was seeking a water route to the Pacific on behalf of the North West Company, then in a competitive trade war with the larger Hudson Bay Company. On his first attempt, he traveled to Fort Chipewyan on Lake Athabaska, then to Great Slave Lake, and then on to an unexplored river. He thought it would take him to the Pacific, but instead, it led to the "Frozen Ocean," better known as the Arctic Ocean. Mackenzie labeled it the "River of Disappointment," but today it is known as the "Mackenzie River." Four years later, he tried again. The route wasn't so direct. He had to follow various rivers, and part of the way traveled overland. He got some help from Indians in finding his way, eventually reaching the Pacific from the Bella Coola River in British Columbia. Mackenzie was the first to cross the North American continent north of Mexico, beating Lewis and Clark by about a decade. The book includes some of the earliest maps of western Canada and contains a description of the fur trade. CAD $8,000 (US $6,232).

Next we have a picture book of five of Canada's most famous young people, The Dionne Quintuplets Growing Up. Exclusive Pictures. It was published in 1935, and they hadn't grown up all that much at that point. They were still only one year old. Quintuplets were rare and exciting back then, in the days before drugs and test tubes were resulting in litters and octomoms. For many years, the public followed their lives. They were exploited, by their parents as well as others, eventually becoming estranged from them. All survived to adulthood, though wishing they had had more privacy growing up. Two still survive today, age 83. Item 19. CAD $50 (US $39).

Here is that look at Salem, Massachusetts, and even its witch trials. It is an account of the history of that noted New England town, but one whose name will always be associated with witches. Such is the fate of a town that let its passions overrule its senses over three centuries ago. The title is A Discourse Pronounced at the Request of the Essex Historical Society, on the 18th of September, 1828, in Commemoration of the First Settlement of Salem... The writer was Joseph Story, a native of Marblehead, also in Essex County. Story was one of America's most notable jurists. He served on the U. S. Supreme Court from 1811-1845, and wrote perhaps the most famous book on American constitutional law. He was an excellent candidate to speak of trials, of witches or of other matters. Story talks about various aspects of Salem's history, including the hardships in forming the colony, but also touches on the infamous witch trials of 1692. He notes, they "terminated in the death of many innocent people, partly from blind credulity and partly from overwhelming fraud." Item 3. CAD $150 (US $117).