From Black Sea to China Sea from Shapero Rare Books 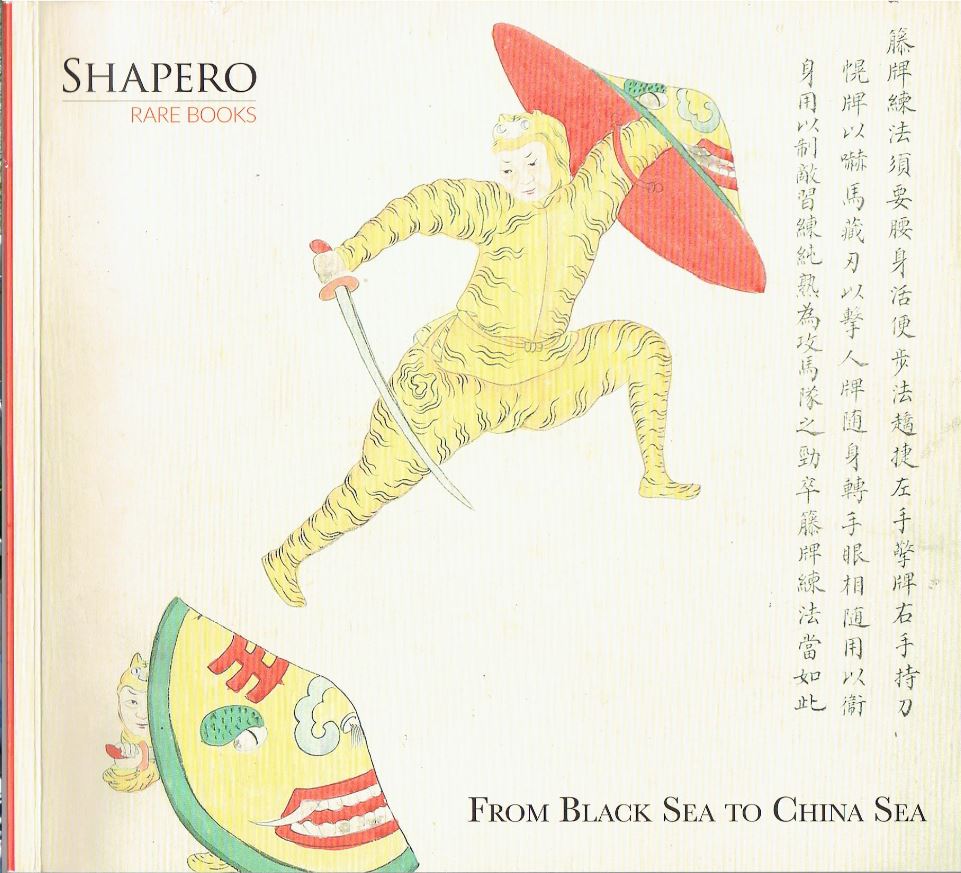 From the Black Sea to the China Sea.

Shapero Rare Books has published a catalogue entitled, From Black Sea to China Sea. New Acquisitions in Asia 2018. That may be only a single continent, but this catalogue will take you from the edge of Europe to the Western Pacific. Shapero has divided the continent into five regions to make it easier to find what you want. They are: (1) Turkey, the Levant, Holy Land, and Arabia; (2) Central Asia; (3) Indian Subcontinent; (4) South-East Asia; and (5) China & Mongolia. If your collecting focus is east of Europe and west of America, you will surely find material of significant interest. These are a few selections.

The western end of Asia was the source of much our knowledge of the earliest modern societies. It was, after all, the "Cradle of Civilization." Heinrich Schliemann was an amateur archaeologist who devoted much of his time (and fortune) to making discoveries in the ancient world. Though a German, he made his fortune in Gold Rush California, and still more in Russia. With that, he headed to what he correctly identified as the location of ancient Troy. Schliemann believed that ancient Greek writings were based on historical fact, and his research helped to establish his point. While Schliemann's excavations were not conducted as carefully as one would want today for preservation, standards were not that well understood in the 1870s and 1880s. Item 31 is an account of his excavations in Troy in 1862, Troja. Results of the Latest Researches and Discoveries on the Site of Homer's Troy and in the Heroic Tumuli and other Sites, made in the Year 1882. It was published in that same year. Priced at £850 (British pounds, or approximately $1,177 in U.S. dollars).

Paulo Emilio Botta was another 19th century researcher determined to unravel the ancient past. Botta was appointed French Consul to Mosul in 1842, an appointment he made the most of to search ancient sites in the area. He published his findings in 1849-50 in Monument de Ninive. Botta thought he found the ancient site of Nineveh. He didn't, but no matter. It was the palace of Sargon II, a magnificent structure built around 710 BC. Sargon was the leader of Assyria, who conquered Babylon and Israel, capturing both land and wealth. He died as he lived, in battle. Botta excavated a complex of rooms and discovered numerous carved and inscribed gypsum slabs, and colossal winged bulls with human heads that look like genetic engineering gone terribly awry. Some of these sculptures were shipped to the Louvre where they became very popular. Botta's book contains numerous plates of illustrations along with descriptions of the excavations. The book was highly costly, 2,000 francs, which put it out of reach of many other scholars. Item 45. £30,000 (US $41,559).

Joseph Dalton Hooker was one of Britain's most famous botanists, a contemporary, best friend, and supporter of Charles Darwin. Darwin asked Hooker to help prepare his botanical notes after his return from South America, and ran his conclusions past his friend as he developed his theory of evolution. Hooker was one of the first to know, and first to defend Darwin's theory once it was made public. Hooker undertook several expeditions himself to study plants. In this case, he climbed high in the Himalayas gathering specimens. If that sounds cold, Hooker was prepared, having earlier done the same on Ross' Antarctic expedition. He spent 1848-50 in the Himalayas, climbing to 19,000-20,000 feet. At the time, it was the highest any European had climbed. Hooker's account is entitled Himalayan Journals, published in 1854. Item 83. £2,500 (US $3,463).

Next we have another man associated with cold climates, though he managed to stay away from them himself. The northernmost point in the United States, Point Barrow, Alaska, is named for him. Sir John Barrow spent most of the final four decades of his life in the Admiralty, and as such, he promoted British exploration of the Arctic. He later wrote about these explorations. However, this is an account of an earlier voyage, to a much warmer place, one in which he was a participant. Item 98 is A Voyage to Cochinchina, in the Years 1792 and 1793. Cochinchina is now the southern part of Vietnam. Barrow accompanied a mission to the Emperor of China as an interpreter, but the voyage made several stops along the way, including Madeira, Rio, and Batavia. Barrow provides an account of the voyage, along with much information on Cochinchina taken from a manuscript by French naval officer Captain Barissy. £2,750 (US $3,810).

This is the rare and beautiful A Panoramic View of the Holy City of Benares. Benares, more often known as Varanasi, is the holiest of cities to Hindus. It is also one of the oldest cities. Located in India, it is a site of pilgrimages, with many believing that those who die there will be freed from the unending cycle of birth and rebirth. This panorama by John Dalrymple was printed and published in Calcutta in 1827. When opened, it measures 9 ½" x 126". £22,500 (US $31,171).