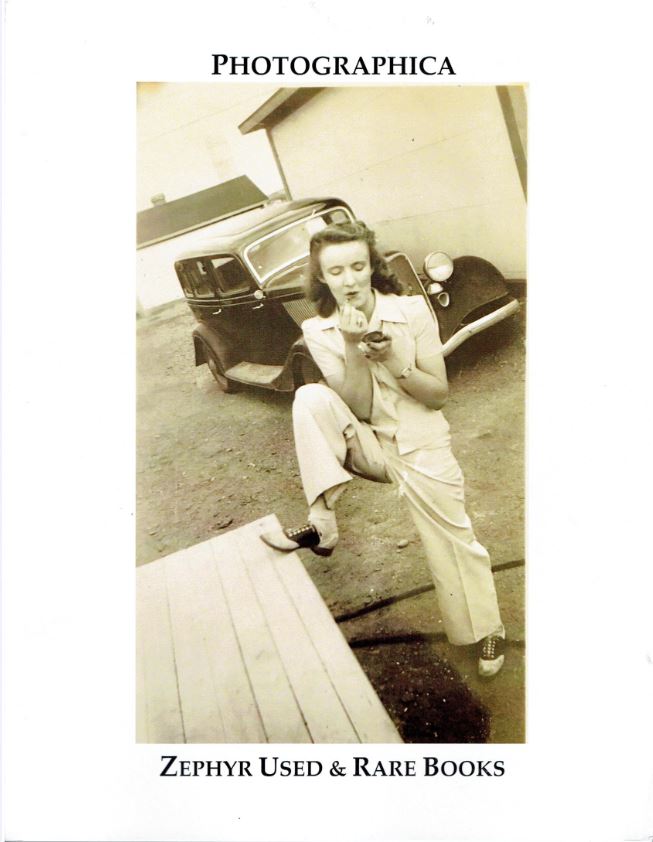 Zephyr Used & Rare Books has created a catalogue entitled Photographica. It is filled with items featuring, naturally enough, photographs. Some are photo albums and archives, a few with thousands of photographs. Others have printed images within a book. The photographs cover all sorts of activities. They can be travels, road trips around America to far overseas. Others recount businesses or their product line. Some were intended for salesmen. Those intended for early car dealerships, or of locomotives, or road building projects depict a nation with a new-found freedom to roam. Others are related to military service, a nation defending itself from external threats. And then there are parades and circuses for fun. Here are a few samples from this selection of photographica.

We begin with one of those early automotive collections. Item 9 consists of 11 photographs for a dealer's album from the Knox Automobile Company. They are from the model years 1909-1910. The company was founded by Harry Austin Knox in Springfield, Massachusetts, in 1899. Its first cars were quite primitive, but by 1909, they had a selection that ranged all the way up to a $4,800 model that could reach speeds of 70 mph. A Knox was there for the first day of races held at the Indianapolis Speedway, piloted by race car driver Billy Bourque. Bourque won one of the shorter races, as did Louis Chevrolet (in a Buick). Unfortunately, on the 250-mile race later that day, Bourque swerved off the course and became the first fatality at Indy. Not only did Knox make cars, but they also made trucks and buses, also seen in these photographs. Knox produced its last automobile in 1914, but continued in the truck and bus business until closing its doors in 1927. Priced at $750.

The invention of the automobile opened America to all types of travel adventures. A little over two decades later, in 1933, four young ladies from North Dakota took off on a tour unimaginable at the time of the Knox. They visited 32 states on their lengthy vacation. The four picked up a used car they called "Shasta" (shehasta have gas, shehasta have oil, shehasta have lots of attention) and headed east to the Chicago World's Fair, with stops in Minneapolis and Wisconsin along the way. Then it was farther east, stopping for a football game at Notre Dame, a visit to Niagara Falls, Lake Champlain, Vermont and New Hampshire, south to New York City (Statue of Liberty, Met, Ellis Island, Brooklyn Bridge), Monticello and James Monroe's home in Virginia, the Carolinas, Georgia and Florida, picked up some hitchhikers heading back west, stopped in New Orleans, and had to be pulled through flooded waters by two African Americans in Louisiana, before eventually winding their way back home. One of the young ladies, Rae Ione Fritch (no longer a young lady when she died in 2007 age 96) kept a scrapbook. It contains 10 original photographs, 40 color postcards, 18 botanical, shell and mineral specimens (with location noted), four maps, 50 pieces of ephemera, and three long pages of manuscript description. They note the sayings on the legendary Burma Shave signs along the way. The ladies started with $150 in cash, and it's hard to imagine how they pulled it off with that amount even back then. Item 13. $650.

All those automobile travelers required services. They sprung up quickly to meet the need. If those young ladies ever took a trip west instead of east, perhaps to visit Yellowstone, they may have stopped at Inez and Monte's place. Perhaps they slept at their motel, purchased a few of the agates Monte collected and sold. Maybe Inez pumped their gas. She operated the Texaco station near the Powder River and Terry, Montana. There weren't a lot of places to stop along Highway 10 in rural northeastern Montana in those days (not all that many even now). Item 58 is an archive of 11 photo albums, containing almost 2,400 photographs, along with diaries, ledgers, postcards, and account books for Inez Turner Angus (later Baars) and Monte Angus, circa 1900-1950. Inez had taught at various one-room schools across North Dakota and Montana when she took a job in Terry in 1919. The following year, she married Monte Angus, a struggling farmer and widower almost 20 years her senior. He opened a fish and agate shop, but in 1925, Inez purchased a larger piece of land to set up his agate shop along with a Texaco station and the "Honeymoon Cabins." They had two children, Ramona and Chester, who appear as well and evidently took some of the photographs (that is Ramona on the cover of this catalogue). They did well enough that in winter, when roads would have been impassible, they ran a similar business in Arizona. In time, Monte stayed in Arizona year round while Inez and the children went back to business in Montana. Still, this was the Depression, and their ledgers indicate they frequently had to deal with slow paying customers, and were slow sometimes themselves. We can only speculate as to whether the cause was the long separations, but Inez and Monte divorced. Inez continued to run the Texaco shop until 1944, when, now remarried, she was forced to close. Wartime rationing of gasoline finished off the business. This large archive chronicles the life of the family, through good times and bad. Daughter Ramona died just last year, which we imagine is why this family archive is now available. $9,850.

Next is a different sort of travel book. It contains 177 tipped in photos of a tour of businessmen to Europe in November 1963. It was sponsored by Time Magazine, and the tour took them to Moscow and Berlin. They met German and French leaders along with Nikita Khrushchev. This is one of perhaps 50 copies of the book, the photographs taken by Life Magazine photographer Robert Lackenbach. At the beginning, they met with President Kennedy, who we see meeting with the businessmen on November 2. That was an eventful day, Kennedy having to see them while dealing with a crisis in Viet Nam. It was the day South Vietnamese leader Ngo Dinh Diem and his powerful brother were assassinated. Twenty days later, Kennedy would be assassinated. Item 51. $1,750.

Here is a photographic archive even older and more massive than that of the Angus family. It is a collection of approximately 3,500 glass plate negatives from the studio of Fred H. and Oscar Kiser. The brothers went into business in Portland, Oregon, in 1901, but Oscar died in a drowning accident in 1905. Fred lived another 50 years, later moving his studio to Crater Lake and eventually to Los Angeles. He became known as one of the premier western photographers of the early twentieth century, selling his photographs and making postcards from them. He is noted for doing much to make Crater Lake and Glacier National Park popular destinations. This massive archive, circa 1904-1930, contains many of the images used in the Kisers' business ventures. They are stored in 28 crates. The collection eventually went to the Sawyer Photo Service. Their President, and inventor of the iconic View-Master, William Gruber, salvaged the collection in 1949 when Sawyer planned to discard it. It remained with Gruber the rest of his life, and with his family for the last 52 years since he died. Item 52. $75,000.