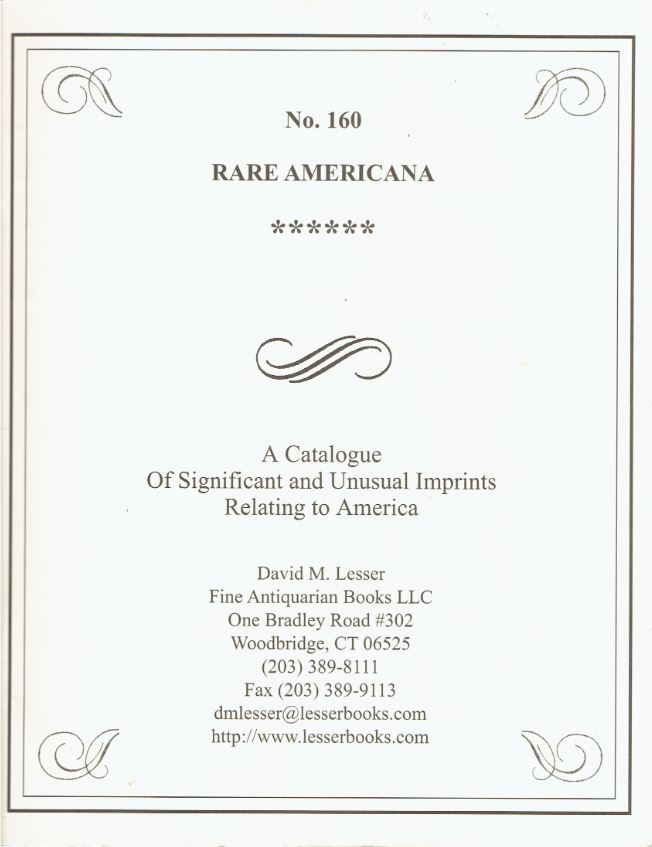 David M. Lesser Fine Antiquarian Books has released their Catalogue 160 of Rare Americana. To be accurate, we have to note there are a few British items in here this time, but they relate either to America or problems experienced in that nation (slavery). We also note a lot of material related to the law. These aren't legalistic treatises, but some are related to state laws and constitutions, particularly from their earliest days, while others involve trials. There are a surprising number of libel trials here, Americans smearing each other, while others rise to theft and, worse yet, murder. Trials don't often bring out the best in us. Here are a few samples of what you will find in this latest collection of Americana-plus.

We begin with a sensational trial from 1846 in Boston. Many believed someone got away with murder. Item 141 is a pamphlet published by the Boston Daily Mail: The Trial of Albert J. Tirrell, Charged with the Murder of Mrs. Maria A. Bickford... Tirrell came from a family of reasonable means but with a reputation for wild behavior. He was married with two children, but took up with the beautiful Maria Bickford, who took up with him, but refused to quit her high-paying job as a prostitute. It enabled her to live well. One night after a visit from a customer, Tirrell came to her room, apparently displeased. Bickford was later found dead, her throat sliced ear to ear, while a couple of small fires had been set in the brothel. This is not all that unusual a case, but what makes it notable was the defense. Tirrell's parents were able to hire the noted and flamboyant defense attorney Rufus Choate. His defense was surprising. He claimed that if Tirrell did it, he did it in his sleep. Tirrell was supposedly a sleepwalker, and sleepwalkers regularly do things like practically slicing off someone's head. At least, Choate convinced the jury this was reasonable. The jury found Tirrell innocent. The prosecution didn't believe the theory and later tried Tirrell for arson from the same incident, but once again Choate got him off. Priced at $850.

Ten years earlier, a trial of a very different sort took place in Washington City, The Trial of Reuben Crandall, M. D. Charged with Publishing and Circulating Seditious and Incendiary Papers... The charge was that Crandall was encouraging a revolt by slaves and free blacks. Crandall was the brother of a noted northern abolitionist and carried some such literature though he was not intimately involved in the movement. His prosecution was more of a warning to northern abolitionists visiting the nation's capital not to take the protection of free speech too literally there. The prosecution played on the potential for racial prejudice in the white jury, but they weren't buying. They acquitted the doctor. Sadly, Dr. Crandall was held in jail awaiting trial where he contracted tuberculosis, from which he died three years later. And there is one more very sad thing about this story. The prosecutor was Francis Scott Key, author of the Star Spangled Banner. Key held a narrow interpretation for his words "land of the free." Item 46. $2,500.

This next item isn't about a trial, though it is related to one. Item 58 is Christ's Promise to the Penitent Thief. A Sermon Preached the Lord's-Day Before the Execution of Levi Ames, Who Suffered Death for Burglary, Oct. 21, 1773. Execution seems a fairly stiff penalty for burglary, though it was for a substantial sum, but Ames already had a bad reputation, a slow learner from past punishments. However, he apparently did recall his old biblical learning as the date of execution approached, seeking redemption before it was too late. It was at Ames' request that Pastor Andrew Eliot delivered this sermon. He listened attentively, and one wonders whether Eliot's words made him feel better. "Unhappy young man!" intoned Eliot, "You have been an atrocious sinner... I pity you still more, when I consider you as an offender against the great God, and in danger of his eternal wrath." That doesn't sound too comforting, though Eliot eased the pain by pointing out that "Repentance is never too late." On the gallows, Ames warned others to learn from his mistake, evidently now fully repentant. $1,000.

While Eliot preached this sermon before Ames, the clergyman who spent the most time with Ames during his last days, and accompanied him to the gallows, was Rev. Samuel Stillman. Stillman, along with Eliot, would become leading supporters of the American Revolution. Stillman was a particularly influential voice in Boston. He would later be one of Massachusetts' delegates to the convention that ratified the U. S. Constitution. Item 131 is A Sermon Preached Before the Honorable Council, and the Honorable House of Representatives of the State of Massachusetts-Bay... on May 26, 1779. In his sermon, Stillman advocated the separation of church and state and the abolition of slavery. He also warned the congregants, "Let us not amuse ourselves with a prospect of peace, and in consequence thereof abate in our preparations for war." $1,000.

This theory is not one promoted in Texas history books, and while not entirely true, it is not entirely false either. It is not one appealing to those who celebrate the Texas Revolution. This is a contemporary account (1836) by Benjamin Lundy (published anonymously), entitled The War in Texas; a Review of Facts and Circumstances, Showing that this Contest is the Result of a Long Premeditated Crusade Against the Government, Set on Foot by Slaveholders, Land Speculators &c. with the View of Re-Establishing, Extending, and Perpetuating the System of Slavery and the Slave Trade in the Republic of Mexico. Lundy charges that it is "settled design, among the slaveholders of this country, (and with land speculators and slave-traders) to wrest the large and valuable territory of Texas from the Mexican Republic, in order to re-establish the System of Slavery; to open a vast and profitable Slave-Market therein; and, ultimately to annex it to the United States." Undoubtedly, different participants in the revolution had differing aims, but all of this would come to pass in what had previously been a land where slavery was outlawed. Item 89. $750.

Item 118 is an apparently unrecorded enlistment certificate from Connecticut for the Revolutionary War. In print, with the name handwritten, it says "I, Christopher Sherman, have this Day voluntarily inlisted myself as a Soldier in the Army of the United States of America." This is one of the earlier instances of the use of this new name for the nation, adopted September 1776. Sherman agrees "to serve during the present War, unless sooner discharged." The exact date is not given, but it is from January 1777. Evidently, Sherman didn't take this pledge too seriously as he shows up in the payroll sheets for January-June as having deserted on either January 10 or 18. For those less desirous of a deserter's enlistment certificate, item 119 is a similar one for John Chatfield. Chatfield must have lived up to his pledge as he he began receiving a Revolutionary War pension in 1821. $7,500 each.