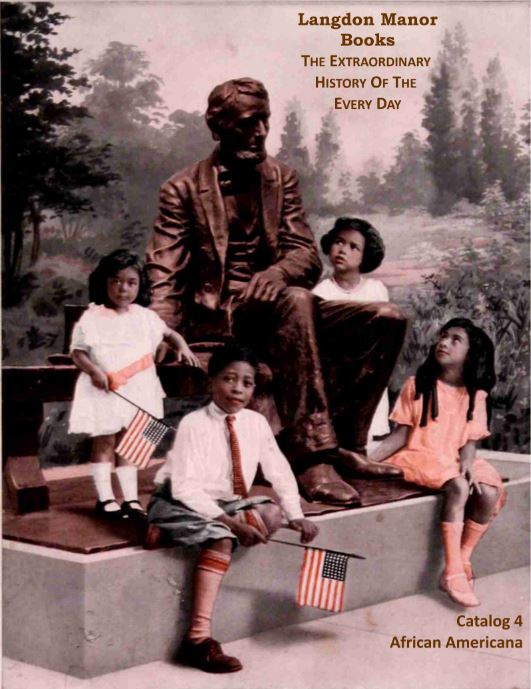 Langdon Manor Books has published their Catalog 4, African Americana. Langdon Manor specializes in "the extraordinary history of the every day," which well describes this catalogue. The material – books, letters, posters, photographs, and such – are mostly from "ordinary" African Americans, not famous leaders. That is not to say the Kings and Douglasses do not appear, but they often appear in material from regular folks, serving as an inspiration. And then, other items consist of archives or photo albums from African American families, schools, organizations, and military units. The dates range primarily from late 19th through the 20th century. While the people may not be particularly notable, they represent "the extraordinary history of the every day" perfectly, as the "every day" lives of African Americans in America during this period were anything but ordinary. They faced challenges everyday just attempting to live normal lives that others did not know. Here are a few selections from this catalogue.

The photo on the catalogue's cover comes from a 1927 calendar for The People's Drug Store in Waycross, Georgia. You can give them a call at 9112. The drug store was owned by black businessman and pharmacist Robert McCants Harris. It pictures four black children, two holding American flags and looking forward, while the other two gaze up at the statue between them. The statue is of Abraham Lincoln. The caption reads, "True Americans." Item 8. Priced at $425.

While political candidates often sought the black vote, particularly where the contest was likely to be close, Republicans had a natural advantage over Democrats, at least until Roosevelt's time, a legacy from Abraham Lincoln. Item 56 is a campaign flyer for Warren Harding (1920) headed, The Colored American and the Campaign Issues. It starts with a quote from Harding, "I believe the Negro citizens of America should be guaranteed the enjoyment of all their rights, that they have earned the full measure of citizenship bestowed, that their sacrifices in blood on the battlefields of the Republic have entitled them to all of freedom and opportunity, all of sympathy and aid that the American spirit of fairness and justice demands." Harding, now regarded as perhaps the most inept President, deserves credit for this inspirational quote. It was not just stuck on a campaign flyer to be seen only by African Americans, but comes from his nomination acceptance speech at the Republican convention. It was there for all to hear. The flyer also lists a quote from Democratic Senator Ben Tillman of South Carolina, one of the more racist politicians, even for his day. It reads, "we stuffed ballot boxes, we shot Negroes; we are not ashamed of it." $100.

While most African Americans in the day were content just to have a sympathetic white candidate to vote for, Joshua Steele expected more. On this broadside To the People! dated August 25, 1894, Steele requests the Republican Party nominate him to be jailer for Boyd County, Kentucky. He notes that no Republican can win an election in the county without the black vote, so considering the many local offices, they should give him a shot at this one. He explains that he is a one-legged, needy man, with the intelligence to faithfully and honestly fulfill the office. He also points out that "this is naturally a colored man's office" because being poor and unable to raise bond, most prisoners are black. Item 59. $1,000.

Item 45 consists of five letters from Joseph Minx of Patterson, Louisiana, serving in Iwo Jima in 1945-46, to his girlfriend, Yvonnie Degean, of Opelousas. It reflects the predicament that so many servicemen of all races faced. The first four letters display his affection for the woman he regularly refers to as "Honey." At one point he is understanding of her loneliness, saying he understands she needs a boyfriend while he is away, which is all right as long as she doesn't fall in love with him. He will be home soon. And then, on March 26, 1946, he curtly writes, "I don't want you to write me any more. I don't want you to ever talk to me any more." One suspects she fell in love with that stand-in boyfriend. $325.

Item 21 is a panoramic photograph of participants at the National Medical Association Convention in St. Louis in 1923. This was the 28th annual convention for this organization of African American doctors, who were excluded from membership in the American Medical Association. Ironically, the photograph is mislabeled "American Medical Association." The panorama is almost five feet wide, displaying several hundred attendees, including a few women. There was a controversy at this meeting as many black physicians decided to protest the appearance of the welcoming speaker, a St. Louis health commissioner who required blacks arriving from the South be vaccinated. He conveniently became sick and cancelled his speech at the last minute. $750.

This next item is much older than the other material in this catalogue. It is also historic, coming from the dedication of the first black Episcopal Church in America and the first African American church in Philadelphia. The idea was not well-received by the white community and fund raising was difficult. Fortunately, the church, led by Absalom Jones, received the support of Benjamin Rush, the great Philadelphia humanitarian, physician, political leader, and signer of the Declaration of Independence. He helped raise funds, and encouraged the black community to help tend Philadelphians who became ill during the terrible yellow fever epidemic of 1793, earning their gratitude. Jones would become the first African American Episcopal priest a decade later. However, the sermon that was here printed did not come from Jones. Rather, A Discourse Delivered July 17, 1794, in the African Church of the City of Philadelphia, on the Occasion of the Opening of Said Church, and Holding Public Worship in it the First Time, was given by Samuel Magaw. Magaw was a white Anglican priest, and he speaks somewhat condescendingly, though his appearance was undoubtedly more than some others would have volunteered at the time. Magaw says the parishioners should be grateful to those who enslaved them as they brought them to Christianity, taking them from "a land of Pagan darkness, to a land of Gospel light." Jones would write a month later that his people's darkness was not in Africa but in slavery. Magaw also calls for the community to be humble, that pride is not meant for even those in the highest stations of life, "much less for persons who have just emerged from the lowest." He continues, "It is said, there is a great deal of this [pride] among your people, already; and that it is increasing fast." Item 60. $2,250.