Indians and the West from the George S. MacManus Company 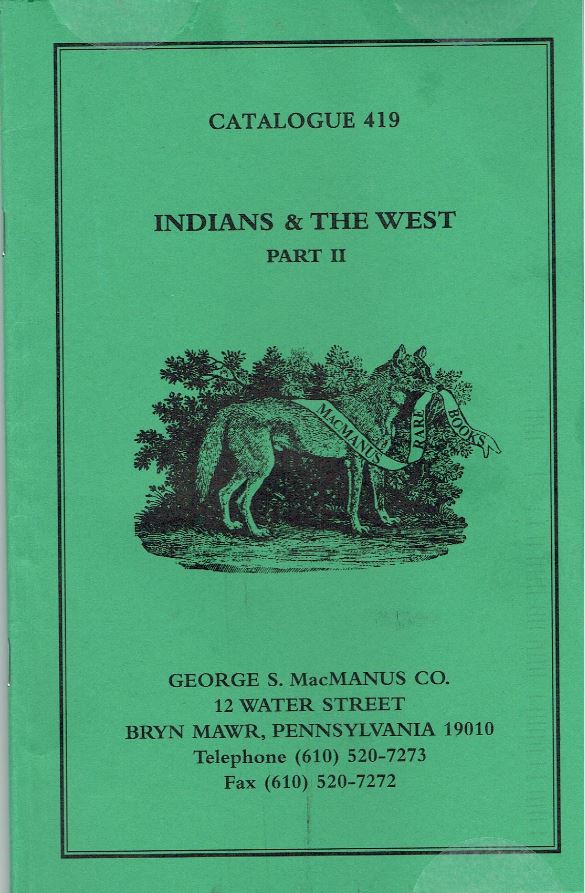 The George S. MacManus Company has issued Part II of their catalogue of Indians & The West. Part II explains why all author names begin with letters from M-Z. It contains 260 items about the Old West, but there isn't much of the Cowboys and Indians type of stuff, nor wild west gunslingers. Rather, what we find is much very important material concerning the development of America west of the Mississippi, occasionally on the east side in earlier days when the "West" began much closer to the Atlantic. This is the West underneath the veneer of Buffalo Bill and Hollywood. These are a few selections from this catalogue.

The treatment of America's natives by the expanding young nation on its way to achieving its "Manifest Destiny" has long been a blot on its history. The forcing of eastern Indians west, the constant taking of land and herding into smaller and smaller reservations, all the while blaming them for what was done, is a sad part of our past. However, it was not always meant to be that way. The nation's founders did not plan this. Item 550 is the first federal law regulating interaction with the natives, a very rare copy of the 1790 action Congress of the United States... An Act to Regulate Trade and Intercourse with the Indian Tribes. It requires that anyone involved in commercial activities with the Indians be licensed by the Federal Government. Those who aren't licensed will forfeit all goods sold or obtained through their trade. The sale of Indian lands could only be done through the authority of the Federal Government. It provided for the punishment of anyone who committed crimes against the Indians. Of particular note, because it would be violated so often later on, it provides for the punishment of anyone who went onto Indian lands and "there commit any crime upon, or trespass against, the person or property of any peaceable and friendly Indian or Indians." The founders had high ideals, but as settlers, gold-seekers, and others discovered the riches of Indian lands, those ideals and laws were often ignored. Priced at $20,000.

So, who were America's human inhabitants before the Indians? The answer, of course, is earlier "Indians," their ancestors. However, Josiah Priest had a different theory, described in his 1833 book, American Antiquities, and Discoveries in the West: Being an Exhibition of the Evidence that an Ancient Population of Partially Civilized Nations, Differing Entirely from Those of the Present Indians, Peopled America Many Centuries before the Discovery by Columbus. According to Wikipedia, Priest is known as "one of the creators of pseudoscientific and pseudohistoric literature." He was not trained in archaeology or similar subjects, but that did not stop him from examining ancient sites, notably Indian burial mounds, and combining his conclusions with his biblical interpretations to determine America's ancient history. Basically, his starting point was racist, that the earlier civilizations were too advanced to have been built by the "savages" who then inhabited the land. So, he concluded they must have been descendants of Noah or the the Lost Tribes of Israel. Read this book to understand the thinking of his time, not American antiquity. Item 437. $300.

One of the earliest to envision the project that opened the West, the transcontinental railroad, was Asa Whitney. Whitney was a New York merchant who went to China to trade. Rather than opening the West, Whitney was more interested in opening China trade. He believed a railroad to the Pacific would make trade with China and Asia much more efficient than the long journey around the southern tip of South America. After returning from China in 1844, he set about devising a plan. Here is his first, Memorial of A. Whitney, Praying a Grant of Public Land to Enable Him to Construct a Railroad from Lake Michigan to the Pacific Ocean, published in 1846. Note that date. The Transcontinental Railroad, finally completed in 1869, ended in San Francisco, but in 1846, California was still part of Mexico. His map shows the railroad crossing through Iowa and over South Pass in Wyoming, but then disappearing. Evidently, he was still struggling with finding an appropriate terminus, though it would have to be somewhere in the Oregon territory. Congress never gave Whitney the land to construct his railroad, but his proposal provided inspiration to others who would go on to construct the transcontinental railroad two decades later. Item 578. $350.

By the 1850s, there was far more attention directed toward planning a Pacific Railroad. Item 445 is a massive report, Reports of Explorations and Surveys, to Ascertain the Most Practicable and Economical Route for a Railroad from the Mississippi River to the Pacific Ocean. It consists of 12 volumes, published from 1855-1860. The project was under the direction of Jefferson Davis, but not in his role as Confederate President, but his earlier position as U. S. Secretary of War. The surveying was conducted in 1854-55, and it provided an enormous increase in knowledge of the American West, its geology, geography, topology, and natural history. It also contains the best mapping of the West up to its time. Along with its maps, there are numerous lithographic plates, some colored. $10,000.

These people certainly could have used a Pacific Railroad, if only it had been built when Asa Whitney was proposing his. Item 350 is History of the Donner Party. A Tragedy of the Sierras. This account by Charles McGlashan was published in 1879, but the Donner Party attempted to cross the Sierra Mountains to the California coast in 1846. According to Reese, "Probably no feat of endurance in the West has so seized the popular imagination." There were other terrible journeys, but the starvation in the high mountains, and the turn to cannibalism by those who survived, is why this story is still well-known today. McGlashan was the editor of the newspaper in Truckee, the closest town, which enabled him to gather many records of the event three decades earlier, putting together "the most trustworthy account of the journey." McGlashan was also able to interview many of the survivors still around at the time. $2,500.