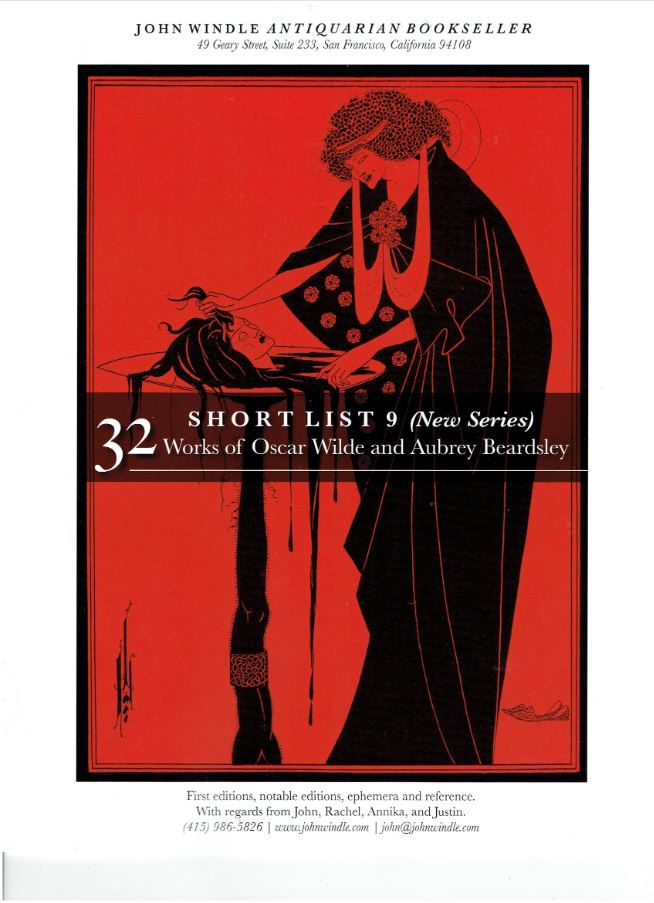 John Windle Antiquarian Bookseller has issued a catalogue of 32 Works of Oscar Wilde and Aubrey Beardsley. Wilde was, of course, the writer, Beardsley the artist and illustrator. They both came from the Aesthetic Movement of the late 19th century, where works were appreciated more for their aesthetic appeal than their deeper meanings. Their careers would intertwine, notably in Beardsley's illustrations of Wilde's Salome. That play had to be moved to Paris because of British censors. That was fitting as both pushed the limits of staid British society. These are a few of the 32.

Here is the aforementioned Salome. Drame en Un Acte. The "Drama in One Act" part is in French for the reason stated above. Wilde wrote the play in English, and rehearsals began in June of 1892 for the play to appear at the Palace Theatre in London. The legendary actress Sarah Bernhardt was to star. However, the censor refused to give it a license. Salome is based on biblical characters, and such was not permitted in 19th century England. So Wilde up and moved the play to Paris. Naturally, it needed to be in French to be appreciated there, so Wilde rewrote it in French. The result is that this edition, one of 600 copies published on February 22, 1893, is a first edition and not a translated one, as Wilde rewrote it himself. Wilde would return to France a few years later under much worse circumstances, where he died (more about that later). Item 8. Priced at $3,500.

The first edition was not the one illustrated by Beardsley. That would be the first English edition, and ironically, this is the translated edition. Item 10 is Salome A Tragedy in One Act: Translated from the French of Oscar Wilde: Pictured by Aubrey Beardsley. It was published the following year, 1894. Beardsley's "striking" illustrations make this one of his best known works. It is dedicated to, and officially translated by (with much help from Wilde himself) Lord Alfred Douglas. Douglas was his lover, and a libel accusation directed by Wilde to Douglas' father, who called Wilde out on the homosexual relationship, led to Wilde's downfall and eventual exile to Paris (more about that later too). This first English edition was published in 500 copies, this one signed "W. Irving Way Chicago 1894." Way was the secretary of the President of the Atchison, Topeka, and Santa Fe Railroad. After the President retired, he became a bookseller in Chicago, co-founded the Duodecimos and Caxton Club, and formed the fine press publishing house of Way & Williams. $5,750.

This is Wilde's best-known work, perhaps his masterpiece, the play The Importance of Being Earnest. A Trivial Comedy for Serious People. It uses Victorian characters to humorously portray British society. It was a huge success when it opened in 1895, definitively establishing Wilde's recognition as a great writer. However, the play was not published until 1899, and even that took some daring. It was shortly after the opening of the play that Wilde's feud with Douglas' father would break out, resulting in his libel charge and, not long after, his imprisonment for indecency (and, yes, more about that later). Item 17 is one of the large paper copies. $1,375.

Now we will go back to the earliest days of Wilde's career. He started out writing poetry. This poem is entitled The Conqueror of Time. It appears in vol. 1 no. 1 of Time a Monthly Magazine, published in London. The date was April 1879. Wilde graduated Oxford a year earlier, and was in that period of finding his way. He published a number of poems in magazines during his university years, but greater recognition would come when he published his volume Poems in 1881. This poem appears in that volume under the title Athanasia. This magazine publishing is very rare, though Windle notes there may be copies around whose significance is unknown as Wilde's appearance in its pages may not be recognized. Item 13. $1,750.

This final effort by Wilde is unlike anything else he ever wrote, and is the answer to the various "more about that laters." Item 22 is The Ballad of Reading Gaol, published in 1898, the year after he was released. Wilde spent two years as a guest of the state after his conviction for gross indecency and they were about as unpleasant as they could be. He emerged a broken man. He was not equipped for such conditions, nor the food, he not having lived anything like the life of a criminal. He was broken both emotionally and physically. Wilde went into exile in France, where he led a life of despondency and poverty. He could no longer bring himself to write, depending on friends and family for moral and financial support. He continued to deteriorate. Three years after going into exile, Wilde was dead. The Ballad of Reading Gaol was not published under his name, but as by "C. 3. 3." That was his cell number. He feared his name would deter sales. It is a poem based on the life of another inmate, one who was executed. However, its major focus is not so much on the prisoner but on the deplorable conditions in the prison. $3,000.