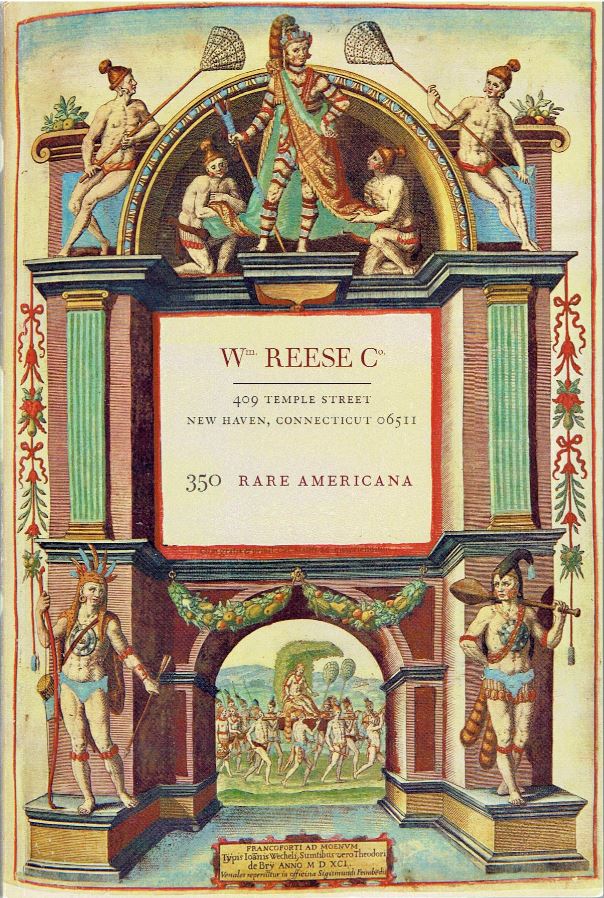 The William Reese Company has published their Catalogue 350 of Rare Americana. This one is another milestone, and they are celebrating no. 350 with 50 special items in Americana. There is nothing ordinary here. This catalogue includes some of the most important printed and manuscript Americana. It ranges from old to very old, some of the earliest European Americana. Presented in chronological order, it goes from a 1504 account of his third voyage by Amerigo Vespucci to a 66-volume set on natural history and archaeology published from 1879-1915. A lot happened in between. Here are a few stops along the way.

We will begin with that oldest item as who better defines America than the man for whom it was named? Amerigo Vespucci made four voyages to America, the first two for Spain before switching to Portugal. This account of the third voyage is his first published account, his only other being an account of the four voyages published later in 1504. This account is in the form of a letter to Lorenzo de Medici, the Medicis being his patron. It is in this letter that Vespucci gave the Americas their first common name, the "New World," though it is now known by his own first name. Vespucci's first two voyages were made in 1497 and 1499, this third in 1501. He visited South America, this being the first printed account of Brazil. Vespucci met with the natives, Reese telling us "whom he describes as naked cannibals wearing colorful ornaments in their perforated ears, noses and lips." Today we call them "piercings." Reese continues, "He describes their shameless sexual practices, and speculates they lived much longer than Europeans." Vespucci saw the Brazilians from a European perspective. Offered is a second issue of the Augsburg edition. All are extremely rare. Item 1. Priced at $450,000.

Sabin described this next work as "indispensable to the student of Spanish affairs in America after the conquest." The author is Francisco Lopez de Gomara, the title Primera y Segunda Parte dela Historia General de las Indias... It is a two-part book, the first relating to the subjugation of Peru, the second, more significant part to the conquest of Mexico. Lopez de Gomara was quite familiar with the latter as he was the secretary and chaplain of Hernan Cortes. This is one of the two chief accounts of Cortes' conquest of Mexico and the first printed account of his expedition to California, along with the expeditions of Ulloa, de Niza, and Coronado. Offered is a second issue of the first edition, the only difference being the title page with the date changed from 1552 to 1553. It is exceedingly rare. Item 4. $135,000.

Item 14 is a manuscript Jesuit profession of faith, written and signed by Father Eusebio Kino. It dates to his first year in Spanish America, 1483, when he traveled to Baja California. These are his formal vows, written in Latin, discussing his vows of poverty and obedience. Father Kino would go on to be an important figure in the discovery of the land and in teaching agriculture and cattle raising to the native tribes. He was most active in the Mexican state of Sonora and what is today southern Arizona. One of his missions is only a few miles outside of what is today Tucson. He founded a whole series of them across Sonora, Arizona, and California, along with mapping the territory. $25,000.

Next is a three-page autograph letter from Thomas Jefferson to the Marquis de Chastellux. It is dated Dec. 24, 1784, when Jefferson was in Paris, serving as Minister to France. Chastellux had served with French forces that came to aid the American Revolution. He served under Rochambeau during the critical victory at Yorktown. Chastellux was the primary go-between from Rochambeau to Washington, he being fluent in English. When he returned to France, he wrote about both the Revolution and his observations of America after the fighting ceased. He published a very limited, private edition of this work, and those later observations caused some consternation. Jefferson was upset by what he heard, but after reading the book, realized that it was overwhelmingly complimentary toward America, with the negative comments all being focused on a few paragraphs. Jefferson writes that he was very concerned by the comments he heard, but after reading it, "I never was so astonished. I found it the most flattering account of America that had ever been written." Having now flattered Chastellux, Jefferson request a few changes before the book is published to a wider audience. Jefferson requests the removal of certain paragraphs, and when Chastellux republished the book, he softened some parts and removed others as Jefferson requested. Evidently, there were a few unflattering observations about American women, Catherine Van Rensselaer, wife of General Philip Schuyler (and mother-in-law of Alexander Hamilton) in particular. Item 27. $120,000.

Most people don't have their wills printed and published, but George Washington wasn't like most people. Item 33 is The Will of General George Washington: to which is Annexed, a Schedule of His Property, Directed to be Sold. This is a first edition, published in 1800. It provides the details of how Washington's property was to be dispersed among relatives and friends, including a pair of steel pistols taken from the British to be given to the Marquis de Lafayette. His real property was extensive, Washington being a millionaire, which made him one of the wealthiest people in America at the time. However, what is most notable about Washington's will is his treatment of his slaves. It provides for their emancipation after the death of his wife. Martha emancipated them early, perhaps fearful for her own safety with a directive such as that. Washington also provided for the care of older and ill slaves after they were freed, and the education of younger ones. $22,000.