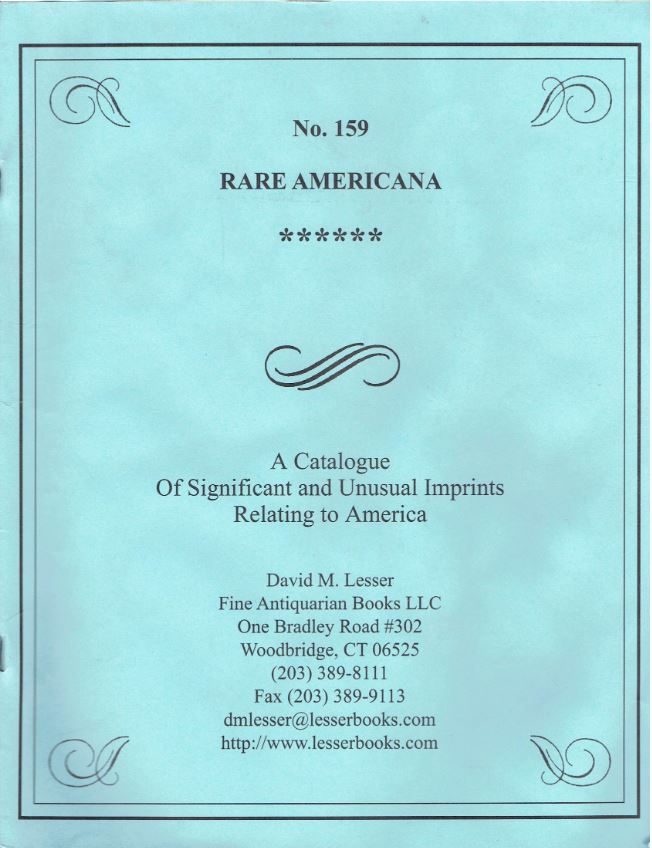 David M. Lesser Fine Antiquarian Books recently completed their 159th catalogue of Rare Americana. You may find anything pertaining to antiquarian America – songbooks, business ledgers, railroads, community promotions, and such, but the majority of the material fits within the categories of politics, religion, and law. So much of our attention, then as now, seems consumed by these subjects. Perhaps that is because these fields can be controversial, giving us topics to write about and argue over, one side against the other. Life would be dull without them. Here are a few of the mostly pamphlets, broadsides, prints, manuscripts, and documents found in Lesser's catalogue.

One of the major reasons women have had to struggle so long for equal rights, even today, is men can have such a propensity to being jerks. Item 57 is Some Facts About Suffrage Leaders. A Cause Is No Stronger Than Its Leaders, by J. B. Evans, a broadside published 1916 or 1917. Anna Howard Shaw, a suffrage leader, had spoken in Alabama in 1915, and Evans herein responds. Evans begins by denying Shaw's claim that he attacked the movement's leaders personally, instead of their cause, and then proceeds to spew out a bunch of personal attacks. Being from the Old South, Evans has a favorite insult. He describes Susan B. Anthony as "a rabid hater of the Southern people to the day of her death, and an absolute worshiper of the negro." Dr. Shaw, he continues, "was the bosom friend of Miss Anthony, and is thoroughly imbued with all her South-hating, negro-loving propensities." He accuses New York leader Mrs. Norman Whitehouse of being associated with a "radical Socialist, feminist" magazine, "setting forth in strong language that Jesus Christ was the illegitimate offspring of Mary, a fallen woman." Oh, "And don't forget that among its most earnest advocates are all Mormons, all Socialists, all Feminists, negro preachers and negro school teachers. A nice bunch for ladies to be associated with even politically." Evans even claims the suffragists' "intellectual development...is decidedly mediocre," without even recognizing the irony of his saying that about anyone else. Priced at $1,250.

Here is a man nothing like Evans, one whose intellect was anything but mediocre. Item 90 is The Republican Party Vindicated - the Demands of the South Explained. Speech of Hon. Abraham Lincoln, of Illinois, At Cooper Institute, New York City, February 27, 1860. This was one of Lincoln's most important speeches, as it catapulted Lincoln from a one-tern Congressman and losing senate candidate two years earlier to the lead for the Republican nomination and ultimately the presidency. Lincoln argues that the contemporary statesmen at the time of the writing of the Constitution saw slavery "as an evil, not to be extended, but to be tolerated and protected only because of and so far as its actual presence among us makes that toleration and protection a necessity." Lincoln hereby made his stand not to allow slavery to be extended beyond the South, and made clear his dislike for the institution and desire to see it eventually disappear, while not going as far as the abolitionists and demanding it immediately be ended in the South. It was a position that would enable more Northern Democrats and Whigs to support him than would an outright call for abolition. Item 90 is an unusual, longer 16-page printing of the speech which includes some other material, including Stephen Douglas' endorsement of the Dred Scott Decision. $750.

This past election was not the first time a political party nominated a presidential candidate many of its members weren't quite sure was one of them. In more recent times, both parties sought the support of General Eisenhower, whose leanings were somewhat nebulous in 1952. In more distant times, the views of General Zachary Taylor were less than clear in 1848 when he was nominated by the Whig Party. The result is this odd pamphlet, headed Great Whig Demonstration in Favor of the Nomination of Gen. Taylor to the Presidency... More akin to Eisenhower, the Whigs wanted him less because of his political views than because he was perceived as a likely winner. So, in reassuring words, the pamphlet proclaims, "All point to Zachary Taylor, as an undoubted Whig, as the man of the people, and capable to bear the Whig standard..." Yes, he really is a Whig, they tried to convince themselves. Taylor won, but died after only a little over a year in office, his views still not all that clear, other than a firm stand that any attempt to break up the union would be met with uncompromising force. Item 131. $175.

The Whig fear of a president who was not one of them was not unfounded. In 1840, seeking their first presidential victory, they added John Tyler to the ticket headed by William Henry Harrison. Tyler wasn't much of a Whig. He joined the party because of his opposition to Andrew Jackson during the Nullification Crisis. However, that was motivated by his being a pro-states rights southerner, not because he followed the Whig playbook. The Whigs figured he could help them carry the South. So, when Harrison died after only one month in office, Tyler succeeded him to the presidency, and for the next 47 months, he was despised as much by the Whigs as by the Democrats. All of this serves as an introduction as to what makes this next item unusual. It is a printed message from the War Department on March 23, 1841, from Secretary of War John Bell. Bell informs the recipients, "The President has thought proper to announce that he will regard all partisan or active interference in elections, and the contributing of any assessment on salaries or official emoluments for party purposes, by officers or agents under the control of the Federal Government, an abuse which he will correct by removal from office." It was a noble attempt to stamp out corruption, but Harrison never had the chance. Twelve days later, he died, making this one of the few official acts of his term in office. Item 142. $350.

Item 22 is a large lithograph of General Scott. The Hercules of the Union, Slaying the Great Dragon of Secession. It depicts Gen. Winfield Scott, a reasonably svelte, middle-age man with a club, smashing the heads of the seven-headed dragon. The heads are those of Confederate leaders, including Davis, Stephens, and Beauregard. The heads are labeled with the attributes of Hatred and Blasphemy, Lying, Piracy, Perjury, Treason, Extortion, and Robbery. Safe to say this 1861 image represented a Northern point of view. Scott was America's longest serving general, having commanded troops all the way back to the War of 1812 when the Civil War broke out. Like Robert E. Lee, he was a Virginian, but Scott remained loyal to the Union. While admired by many, Scott was 74 years old by then, could not command in the field as he could no longer mount a horse, his weight having ballooned to 300 lbs. He no longer looked much like his image in this lithograph. Many in the military considered Scott's "Anaconda Plan" for choking off the South too passive. He resigned his command later that year, with those responsibilities devolving to George McClellan, which in hindsight turned out not to be such a good idea. $1,250.