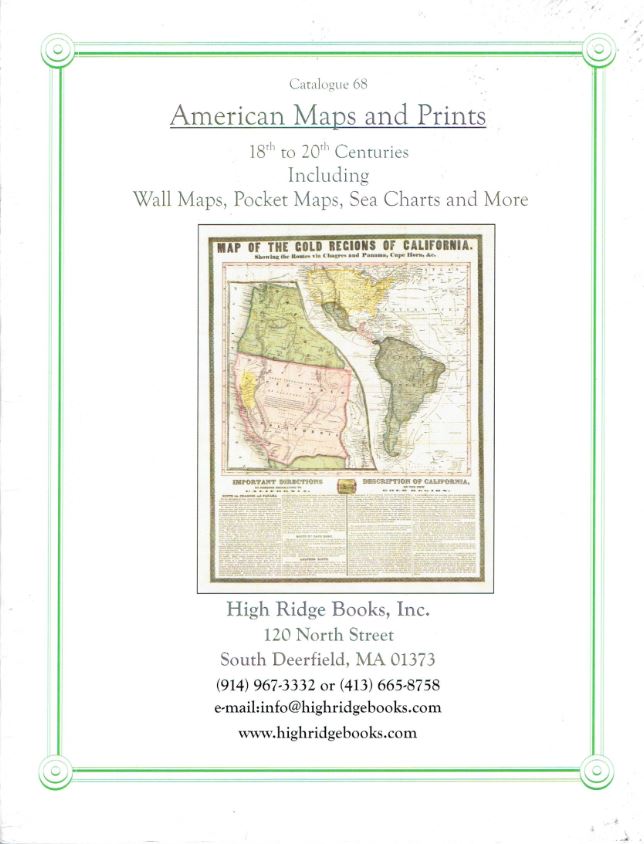 High Ridge Books has published their Catalogue 68 of American Maps and Prints, 18th to 20th Centuries Including Wall Maps, Pocket Maps, Sea Charts and More. They range from large wall maps to the smallest pocket maps and single page printings. The catalogue is arranged chronologically, making it easy to reveal the date range – 1676-1949. For the sharp-eyed, yes, that first item, and the next two, actually precede the 18th century. These are some samples of the material to be found within the new catalogue's pages.

We begin with one of the three pre-18th century items. Johann Zahn was sort of a scientist focused on lenses, telescopes, microscopes, and projections of various sorts. He also wrote about natural history and more in his three-volume set of Mundus Mirabili (wonders of the world). This was published in Nuremburg in 1696. Item 3 is the map of the Western Hemisphere from this work, Facies Una Hemisphaerii Terrestris. There were gaps in knowledge of the Western Hemisphere at the time. Zahn repeats the common myth of this era that California was an island. It also shows the Great Lakes as one single lake, its western border undefined. Little was known about the territory west of the Mississippi or the Pacific Northwest at this time. Priced at $2,750.

This next map was designed for ambitious easterners hoping to make their fortune in the gold fields of California. Published in 1849, item 56 is a Map of the Gold Regions of California. Showing the Routes via Chagres and Panama, Cape Horn &c. This broadside contains a large map of the area of California containing gold, while a second map displays the water routes from the East to California. These include the long, all water route around the southern tip of South America (Cape Horn), one that included an overland trip between the Atlantic and Pacific through Panama, and another with the overland portion across Mexico between Vera Cruz and Mazatlan. The map describes this last route as "the cheapest, quickest and safest," though it does recommend traveling in parties of 40 or 50 to "prevent the danger of being attacked by robbers through Mexico." The map also contains text describing the gold regions and their history. This map is pictured on the cover of the catalogue. $7,500.

Here is a map from 1860, though you would be able to date it by its place names even if it didn't show a date. Item 97 is New Illustrated & Embellished Maps of the Republics of North America, with Adjacent Islands and Countries. In eastern Colorado, it shows the proposed state of Jefferson or Colona. Several names were considered for Colorado before that name was chosen. In 1859, locals petitioned Congress to set up the Territory of Jefferson. It was rejected at the time, but approved in 1861 with its current name. Southern Idaho is shown by another long discarded name, Shoshone. Another feature from the Southwest is an east-west border between Arizona and New Mexico. At the time, Arizona was south of New Mexico, rather than west of it. It also shows one of the earliest appearances of Nevada, partly extending into today's Utah. $5,750.

Here is another item that can be readily dated within a narrow window based on its appearance, but it isn't a map. Item 39 is wall map style of lithograph of the Presidents of the United States, by Klauprech & Menzel of Cincinnati. This must be from 1840-41, which would make it one of the earliest works from Klauprech & Menzel. The giveaway is the group of presidents shown. It includes all of the Presidents through William Henry Harrison, but not John Tyler. Harrison was elected in November 1840, took office on March 4, 1841, but died on April 4, 1841. That leaves a tight window during which Harrison was either President, or at least President-elect, but before John Tyler succeeded him a month after taking office. This piece shows the Presidents in oval portraits, with larger ones at top and bottom for Washington and Harrison. $650.

Next is a bird's-eye view of one of America's greatest celebrations. It was for the 100th anniversary of the Declaration of Independence. Item 144 is a Bird's Eye View, Centennial Buildings, Fairmount Park, Philadelphia 1876. The Centennial International Exhibition was the first World's Fair held in the United States. Nearly 10 million people visited the exhibits from 37 countries, including, ironically enough, Britain. Inventions and modern machinery were the highlight of the fair. There was the recently invented telephone and typewriter, whose descendants, the smart phone and computer, still dominate our lives. This bird's-eye view shows the buildings at the fair, with the Schuylkill River and railroad station in the foreground. $850.

The addition of bike paths and lanes along roads is something of a recent development, and yet they were once more common than today in some places. Item 177 is 50 Miles around New York – a Handbook of Cycling Roads and Routes with Maps and Illustrations. This guidebook includes 145 strip maps of bicycle routes around New York City, extending as far as the length of Long Island, northern New Jersey, Fairfield County, Connecticut, and Dutchess County in Upstate New York. What may be surprising is the date of this publication – 1896. In the two decades before automobiles began to take over the roads, bicycles became a fairly common form of transportation. They were pushed to the back for a century as the automobile came to rule the road, but in more recent years, the roads clogged with cars and traffic jams, many people have rediscovered the convenience of bicycles. $350.