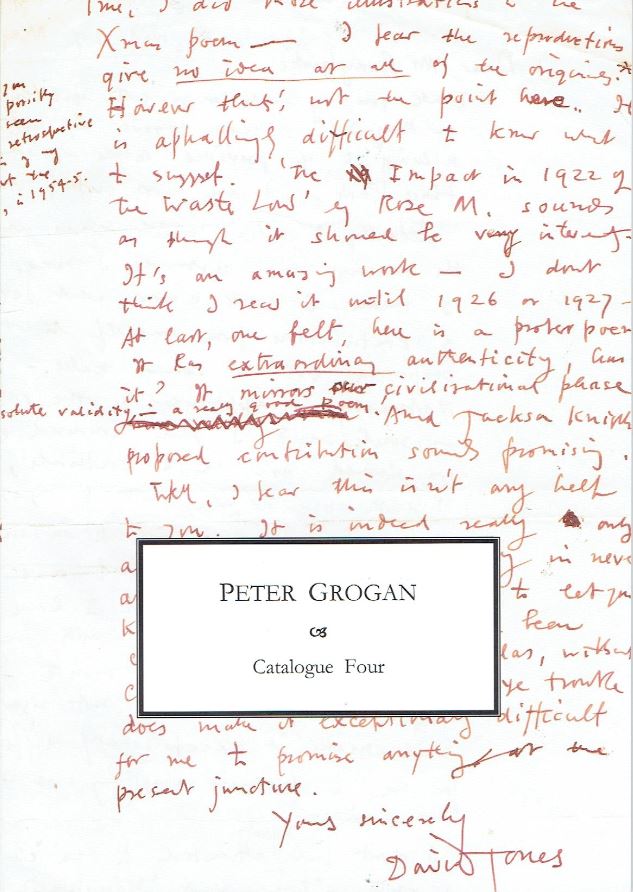 Peter Grogan has published his Catalogue Four. While there is no more specific title or description, what you will find here is literature and poetry, the writings of authors and poets. Those two groupings are not synonymous in this catalogue. Much of what you will find is the writings of these individuals, but not their works. Rather, they are letters and other personal correspondence, both from and to these writers. Much of it is of a personal nature, occasionally romantic, other correspondence more businesslike between writers and publishers. One other common thread to point out is that almost all of the material, both books and manuscripts, come from the twentieth century. Here are a few of the over 350 items to be found within.

First we have a signed copy of Flush, by Virginia Woolf, published in 1933. It is a fictional, somewhat real look at the world from the perspective of Elizabeth Barrett Browning's dog, Flush. It is designated the "large paper" first edition, but was the only contemporary edition. What makes this copy unusual is that it comes with a note from Mrs. Sidney Woolf, Virginia's mother-in-law. Clichés about mother-in-laws notwithstanding, the elder Mrs. Woolf must have been proud of her daughter-in-law. She sends the signed copy of Virginia's book to a friend, and in the note writes, "I hope you will like 'Flush' as much as I do, also that my daughter-in-law having autographed the copy will add to its interest. Yrs affectionately Marie Woolf." Also included is a preliminary sketch by Virginia Woolf's sister, Vanessa Bell, for "Miss Mitford takes Flush for a Walk." Item 342. Priced at £5,950 (British pounds, or approximately $8,205 in U.S. dollars).

For all her accomplishments, and bright periods, Virginia Woolf lived a troubled life. She was institutionalized for depression as a young woman after the death of her father, and had recurring bouts of depression and deeper forms of mental illness. Over the decades after her father's death, she wrote many novels and other works, had affairs with women but still a successful marriage to Leonard Woolf. Unfortunately, the mental troubles finally became to much, and as she felt herself drifting off into madness one more time in 1941, she filled her coat pockets with rocks, walked into a river, and drowned. Item 86 consists of three letters of condolence to Virginia's sister, Vanessa Bell, from the spring of 1941. They come from Violet Dickinson. Dickinson was a tall woman, six feet, a family friend of the Stephens (Virginia's family), half a generation older and a source of great support for Virginia over the years after her father died. £750 (US $1,034).

Next is a set of artwork for one of the most popular series of children's books, those of Orlando the Marmalade Cat. The author and illustrator for these feline adventures was Kathleen Hale, with titles being published from 1938-1972. Orlando lived with his wife, Grace, and three kittens, Blanche, Pansy, and Tinkle. Item 155 consists of Hale's original artwork for Orlando the Marmalade Cat Goes to the Moon. As that book was published in 1968, Orlando evidently beat Neil Armstrong by at least a year. There are two illustrations in crayon and pencil for page 4 of the book on space travel. One depicts Orlando and Grace dressing the children for the trip. They use goldfish bowls for helmets. The second shows their space suits being filled with air from a bellows. Hale has written the caption, "Master kindly pumped up the Space Suits with the bellows." She has also written a cautionary note, perhaps to herself, "Bowl too small an opening to fit over B and P's heads." £750 (US $1,034).

This is one of the most influential of novels of the twentieth century. It covers but one day in the life of Dubliner Leopold Bloom, and one can only imagine how long this book would be if James Joyce had decided to cover, say, a week of his life. Item 186 is a first edition of Ulysses, published by Shakespeare & Company of Paris in 1922. It was published in 1,000 copies, this being one of 750 on hand-made paper. A Parisian publisher might sound odd for a book in English, but this book was not likely to get through censors in the English-speaking world, at least not England or America. It had been serialized before being released in book form and as such, it was already under attack for obscenity. France is a bit more liberal about these things, so Sylvia Beach took on the job for her Shakespeare & Co. and in time, the objections to the book went away. £35,000 (US $48,221).

Speaking of being published in Paris, item 210 is a complete run through Fall 2016 (#218) of the Paris Review. Naturally, it includes 218 issues. It began publishing in 1953, and we need at add an asterisk to the point about being published in Paris. It was back in 1953 when founded, and for the next two decades, but in 1973, it moved to New York. However, the name remained the same. For the first 50 years, until his death in 2003, it was edited by co-founder "Paper Lion" George Plimpton. Numerous household names have seen their writing pass through the Review's pages, including Kerouac, Roth, Southern, Larkin, Beckett and Genet. £5,750 (US $7,932).