Books About the South from L & T Respess Books 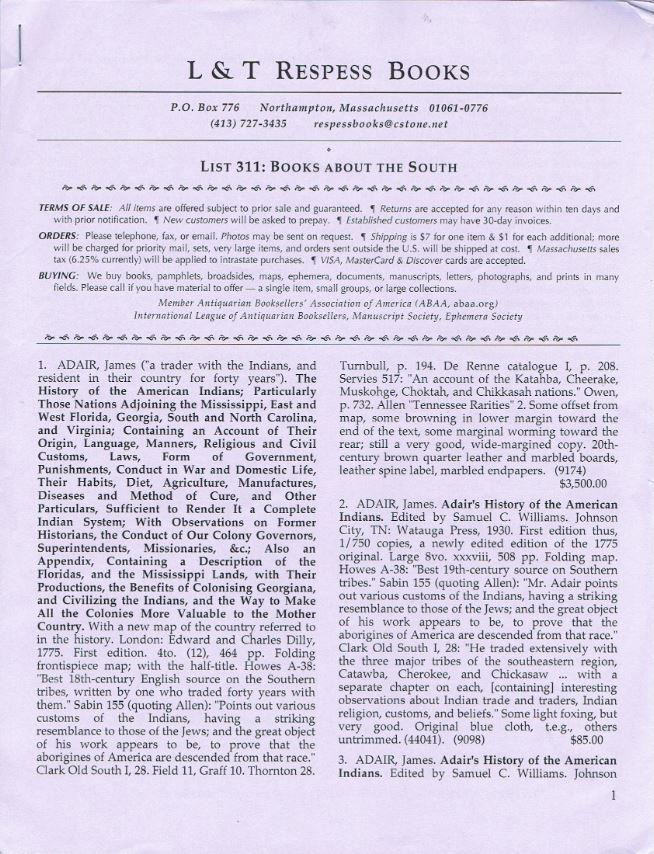 Books about the South.

L & T Respess Books has issued a catalogue of Books About the South. This is an extensive collection, with 430 items offered. Other than either being about, or in some way touching the American South, the subjects are wide and varied. Of course, it's virtually impossible to have a catalogue about the South without that land's cursed history of race relations, from slavery, to the Civil War, to the KKK and other forms of post-war discrimination. However, that is not a primary focus, with lots of local and state historical material primarily on other considerations, railroads, Indians (unfortunately another unhappy chapter), exploration, and much in the way of the South's noble participation in the American Revolution. Here are a few samples of the material emanating from south of the Mason-Dixon border.

We start with one of those Revolutionary War battles, this one taking place in what is now Kentucky (then Virginia). It was the last British victory during that war. It was not an important event. It was sort of like the American victory at New Orleans in the War of 1812, which took place after the war was over. The Battle of Blue Licks took place in August 1782, after the British surrender at Yorktown effectively ended the war a year earlier. However, the peace treaty was not signed until 1783, the war not officially over though mostly dormant at the time. The battle came after an invasion by a group of British loyalists supported by a much larger contingent of Indians, who continued to fight settlers for another century after the British had thrown in the towel. Their motivations were different from the British. The British and Indians led a smaller group of Kentucky militiamen, against the advice of legendary frontiersman and officer Daniel Boone, into a trap and routed them. Many were killed, including Boone's son. Ultimately, the Indians would be forced back, a recurring theme for the next century. Item 335 is an account of the confrontation, Battle of Blue Licks, August 19, 1782, by Samuel Wilson, published in 1927. Priced at $125.

Evidently, not all of the British forgave the Americans their rebellion. Here is a book by a British visitor to America published in 1809: Travels in America, performed in 1806, For the Purpose of exploring the Rivers Alleghany, Monongahela, Ohio, and Mississippi, and Ascertaining the Produce and Condition of their Banks and Vicinity. That visitor was Thomas Ashe, described as a swindler among other uncomplimentary terms by Americans. He came to do some archaeological research, but wrote his opinions of the people as well. It is noted as a highly readable and entertaining account, Howes conceding, "Interesting in spite of its snarling asperity and numerous lies." Sabin was not so polite, quoting the Edinburgh Review as saying, "An unmeasured hatred of the Americans pervades the whole of Mr. Ashe’s narrative. His account of the Atlantic States forms the most comprehensive piece of national abuse we ever recollect to have perused. Their inhabitants it seems are all abominably vicious; but in degrees very nicely distinguished; the middle states being bad---the northern very bad---and the southern execrable." The book was quite popular in England, Ashe obviously knowing what his readers liked to hear. Item 37. $250.

You have undoubtedly seen biographies of Andrew Jackson, but probably not of this Andrew Jackson. Item 141 is Andrew Jackson, Jr., Son of a President: A Biographical Study (circa 1966). Junior was the biological son of Mrs. Jackson's sister, one of a set of twins whom, for whatever reason, they let grow up in the future President's household as an adopted son. Jackson cared deeply for his son, but Junior was little like his old man. Rather than a disciplined individual, he is remembered as a spendthrift. He went through a lot of money, and despite his father's watchful eye and advice, nothing changed that. His father guided him from serious financial problems, but after Senior's death, Junior racked up a mess of debt, buying things he did not need and could not afford, and making costly investments. In 1856, he sold the family homestead to the state of Tennessee to pay off debts. He died in 1865 of a gunshot wound, but not as a result of the Civil War. Rather, it was from an accident in his favorite activity – hunting. $25.

Next is a book about the death of perhaps the South's most notable politician of the 20th century, at least before George Wallace and Jimmy Carter. It was not a death by natural causes. Item 166 is The Huey Long Murder Case, by Hermann Deutsch, published in 1963. The assassination took place in 1935. Long was a Louisiana governor, then senator, a populist with the ability to stir the passions of the poor, some might say a demagogue who played upon them. Whatever you think of Long, he had a heavy following, and his family dominated Louisiana politics for many years after Long died. He started as a New Deal supporter of Franklin Roosevelt, but evolved to more radical views, including redistribution of existing wealth, not just income. He announced he would run for President in 1936, but obviously those ambitions were cut short. He was shot by the son of a judge whom Long had just successfully redistricted out of office. Long died two days later. $30.

Here is a story about the great French Military hero, Michel, or Marshal Ney. Ney was off fighting foreign enemies during the Revolution, perhaps the safest place to be during the Reign of Terror. He made his mark during the Napoleonic Wars, displaying enormous bravery while being wounded many times. He always came back. He was said to be the last French soldier to leave Russia during the retreat. Napoleon called him "the bravest of the brave." Near the end of Napoleon's first rule, Ney turned against him, supporting the Bourbon Restoration. He continued to do so when Napoleon returned but had a last minute change of heart. He joined his old commander and was with Napoleon at Waterloo. When the monarchy was again restored, Ney was tried for treason, convicted, and executed by a firing squad. Maybe. This book is not about Ney's great military career, but about what may have happened thereafter. The title is Historic Doubts as to the Execution of Marshall Ney, by James A. Weston, published in 1895. A few years after Ney's execution, or "execution," a man showed up in South Carolina named Pierre Stuart Ney, who took a teaching job, later taking another in North Carolina. He didn't claim to be the Marshal, but the number of similarities between this man who said he had been in the French Army, ran his classes like a military academy, and had knowledge of so many subjects and had skills similar to Marshal Ney as to make one wonder. He was certainly no ordinary schoolteacher. On his deathbed, he finally said that he was Marshal Ney. Pierre (the Marshal's father's first name) Stuart (his mother's last name) Ney has been a mystery ever since, and even two exhumations of his body have been unable to clear up the mystery once and for all. The story is that the execution was faked, the rifles fired blanks, and Ney was spirited out of the country by supporters of Napoleon or others who admired Ney's service to the country. Item 254. $20.