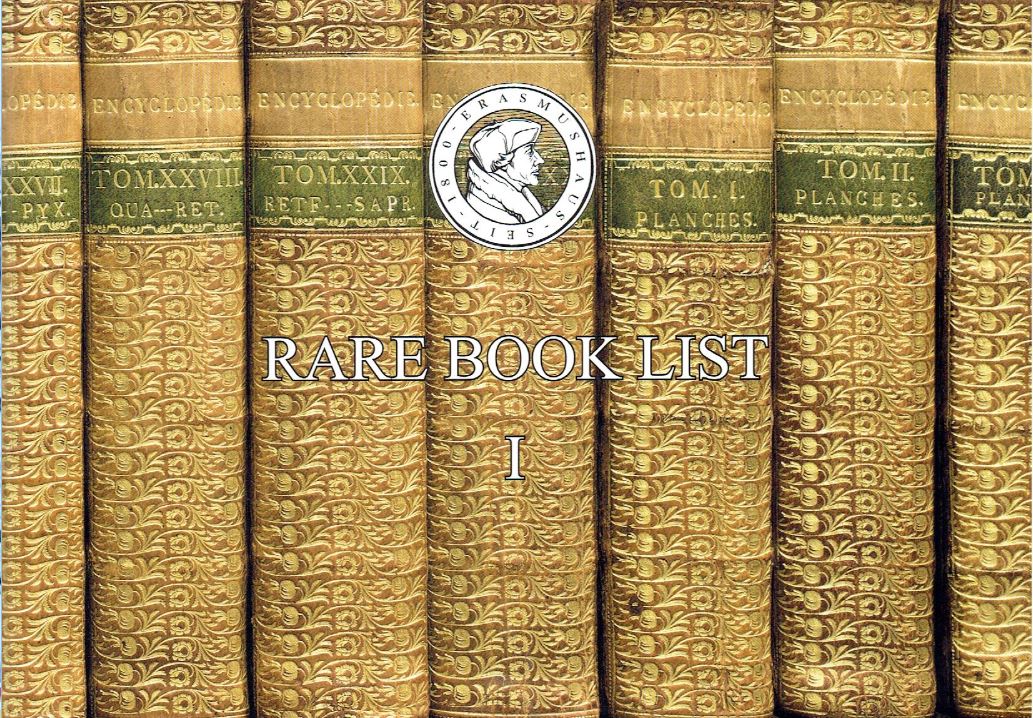 Erasmushaus recently published their Rare Book List I. That is not what it might imply. This is hardly the Swiss bookseller's first catalogue. Last I knew, they had published around 930 numbered catalogues and 52 of their Intermezzos. This is just a different format. Indeed, they have been selling books since 1800. In other words, they have been around longer than some of the antiquarian books they now sell. Here are a few selections from their first book list, but latest of many printed collections.

We start with a book that is an amazing if odd achievement. It comes from the noted Italian typographer and printer Giambattista Bodoni. He was the creator of the still common Bodoni typefaces. The title is Oratio Dominica in 155. linguas versa et exoticis characteribus plerumque expressa, and it was published in 1806. What this is is the "Our Father," or Lord's Prayer, printed in 155 different languages. Fifty-eight of these are Latin-based languages, including italics, but the other 97 are "exotic" languages. Naturally, this presented a great challenge to Bodoni. He didn't have 97 exotic typefaces for languages he never before printed sitting around the shop. He had to design all of them himself. The book is divided into four sections, covering the languages of Asia, Europe, Africa, and the Americas. However, the preface and dedication was limited to three languages, French, Italian, and Latin. It was dedicated to Eugene de Beauharnais, viceroy of Italy under Napoleon. De Beauharnais was the son of Empress Josephine and the stepson of Napoleon. He liked the book so much that he bought up all 180 copies printed on behalf of the government, which later sold them to others. Item 8. Priced at CHF 6,000 (Swiss francs, or approximately $6,175 U.S. dollars).

Next we have the masterpiece of the Enlightenment, Encyclopedie, ou dictionnaire raisonne des sciences des arts et des metiers... by Denis Diderot and Jean d'Alembert. Diderot and d'Alembert were the major writers of this massive compilation of human knowledge, though many other great French minds of the day, including Voltaire, Montesquieu, and Buffon, provided important contributions. While a vast compilation of knowledge, the Encyclopedia also promoted the ideals of the Enlightenment, reason and governments that served their people, rather than the other way around. Item 20 is a copy of the Swiss edition, published in 39 volumes 1778-1781. This was the octavo edition, following earlier folio and quarto editions. It was more convenient for use, but more importantly, it was less expensive. By being more affordable, it opened the doors to learning to people of lesser means than the more wealthy who could afford the larger editions. This is not to say that it reached the poor who could not afford books even if they could read them, but to people more the equivalent of the middle class, educated, of some profession, but still on limited budgets. CHF 12,000 (US $12,395).

This is a much later edition of a book, but unlike in most cases, this does not make it one of low value. The book is Sir Thomas More's Utopia, originally published in 1516. This edition did not come until almost four centuries later – 1893. Nevertheless, it is a most desirable book as it came off the press of the most notable of all the fine private printers, that of William Morris' Kelmscott Press. More was a humanist of his times, one who sought not so much to rearrange society as to fix its wrongs. As such he promoted the ideals of Erasmus, the Catholic reformer at the time of the Protestant revolution, who helped have the book printed. Erasmus sought to reform the Catholic Church, rather than overthrow it. So, in More's Utopia, we find a contemporary society, but one that operates under the ideals of tolerance, education, and high moral standards. The book was a favorite of Morris. Morris was an ardent socialist, and he had published a book about his own version of a Utopian society just two years earlier. Utopia was a natural for Kelmscott to published when Morris sought out earlier great books to print. Morris used the type of his most notable work, the Kelmscott Chaucer, printed in red and black. Item 48. CHF 4,800 (US $4,942).

Next is an important work on Japan, Histoire naturelle, civile et ecclesiastique de l'empire du Japon. This is the 1729 first French edition of a work originally published in English in 1727. It was regarded as the best look at Japan for a century, that country's exclusion policy keeping almost all westerners away. The author was Englebert Kaempfer, a German physician and naturalist, who did much traveling, particularly around the Dutch West Indies, before proceeding to Japan. He stayed in Nagasaki from 1690-1692. He spent his time studying just about everything about Japan as well as exploring the land. The result was this thorough look at Japan, including its history, flora, geography, tea, paper, customs, architecture, coins, calligraphy, and the exclusion policy that lasted until the country was forced to open its doors by the American Navy in the 1850s. The manuscript was purchased after Kaempfer's death by Sir Hans Sloane, who had it published a decade later. It was not a bestseller when first published in English, being subscribed in only 162 copies, but became widely appreciated in Europe after the release of this French translation. Item 38. CHF 6,800 (US $7,022).

Item 64 is a Latin work going back to 1601, Augustissimorum imperatorum, serenissimorum regum, atque archiducum, illustrissimorum principum ... verissimae imagines ... & rerum ... gestarum succcinctae descriptiones. That's a mouthful. Erasmushaus describes this as "the first illustrated museum catalogue ever printed." The author was Jakob Schrenck von Notzing, but the museum collection was that of Archduke Ferdinand II of Tirol. The Archduke had a great interest in history, with a particular concentration in weaponry and armor. He put together a collection of over 1,000 portraits of European noblemen and women. He also collected the armor of notable leaders from the 15th and 16th centuries. They were placed on display at his large residence, Ambras Castle. Ferdinand assigned his personal secretary, Schrenck, to create this catalogue. It took a while as it was not published until six years after Ferdinand died. CHF 12,000 (US $12,395).