Picturing the 20th Century with the William Reese Company 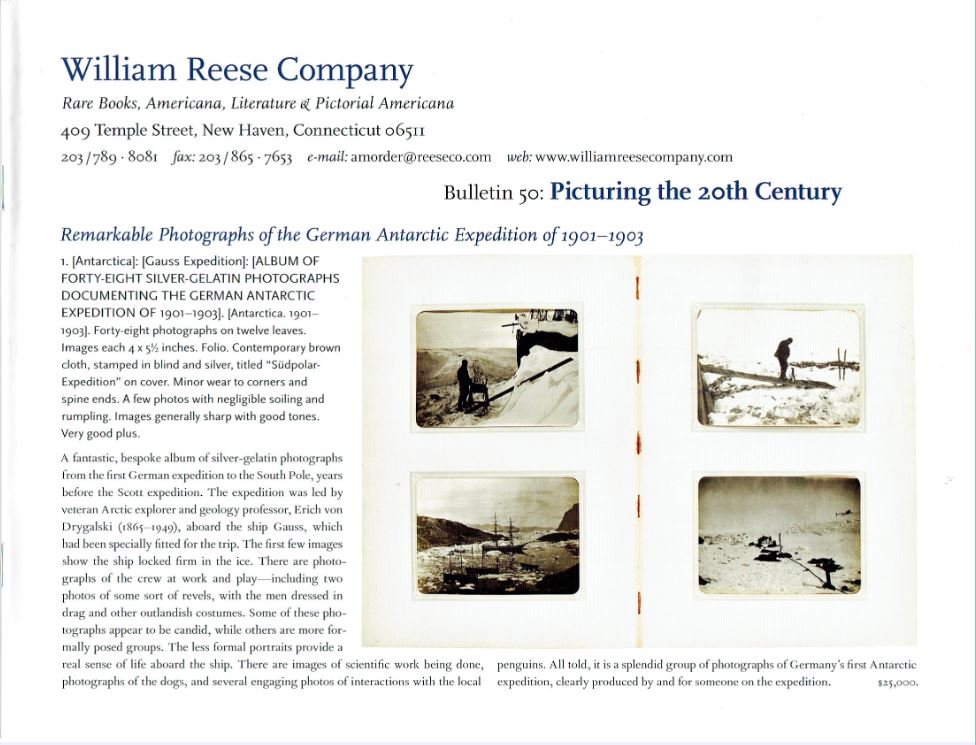 The William Reese Company has issued their Bulletin 50: Picturing the 20th Century. There are many photographic works offered here, but "picturing" does not mean photographs exclusively, not even artistic representations. Much of the picturing is also accomplished through words. What you will "see" here are some of the events and personalities of this century that so changed the world, and of which most of us witnessed a part, be it large or small. No century saw the advancements in knowledge, science and technology that even come close to those of the twentieth, leaving one to imagine how much farther we will have traveled by the end of the twenty-first. Here are a few of these "pictures."

We will begin with a picture that truly is one in the sense of a photograph, and it is a very large one. Actually, it is several combined to create a very big one. Its caption title is Portland Oregon from the Heights West of the City Looking East. This is how Portland looked in 1903. Portland was already a substantial city at the time, having crossed the 100,000 population mark and growing rapidly. Still, it has changed markedly, now six times that size in the city alone, with many more in suburban communities that barely existed at this time. The western heights provide a spectacular birds-eye view of the city. The panoramic image is composed on 14 silver prints 7" x 9" in size, yielding a panorama that is 126 inches in length when open. The photographer was L. C. Henrichsen, of whom Reese tells us he was born in Denmark, moved to Portland in 1861, and had a long career as a prominent jeweler and optician. Item 4. Priced at $4,500.

This next item uses artwork, and a lot of it, to picture the 20th century. Actually, it's supposed to depict events of the 19th century, but it is from the perspective of the 20th century, not the 19th. It is a look at imaginary events from the Old West, the one we imagined in the 20th century rather than the 19th century reality. Item 18 is a collection of 71 original painted illustrations for covers of the British magazine the Buffalo Bill Novels. It ran for a total of 342 issues from 1918-1932. These are the work of Robert Prouse, and they are quite good. They display William Cody in all sorts of exciting and dangerous adventures that never occurred. Bill was a scout and buffalo hunter in the 1870s, and quite accomplished at what he did, but his life was never anything so dramatic as how it came to be depicted. He quickly learned that he could make more money presenting an exaggerated view of the Old West to eastern, and later European, audiences. He toured with his Wild West show, which was enormously popular on both sides of the Atlantic, spawning off side projects such as this British series. Item 18. $55,000.

This one will give you a sinking feeling: Shipping Casualties (Loss of the Steamship "Titanic."). This is the first edition of the official report of that titanic disaster the night of April 15, 1912. This report covers such factors as the ship's technical specifications and journey as well as the tragedy itself that sent it to the bottom of the sea with the majority of its passengers. The report notes, "the ship's pumps could not possibly have coped, so that the damage done to these five compartments alone inevitably sealed the doom of the ship." Item 10. $2,750.

The Titanic is the most famous of all ship sinkings, but there was another of greater consequence around the same time. That was the sinking of the Lusitania. This one was not accidental, struck by an iceberg. Rather, it was struck by guns from a German submarine. In the early days of World War I, Britain blockaded German ports. Germany responded by sending out submarines to sink vessels attempting to reach British shores. While Lusitania was a passenger ship, the Germans believed (correctly) it also carried munitions. Germany had warned passengers to stay off the Lusitania before it sailed from New York, but many did not heed that warning. Nearly 1,200 passengers and crew went down with the ship. This sinking was of greater consequence than that of the Titanic, as while that was a great personal tragedy for those involved, the Lusitania incident would be one of the factors cited when the U. S. decided to enter the war (128 Americans were on board). That led to the defeat of Germany, but at a cost of 116,000 American lives. Item 11 is a remarkable first-hand account of the sinking of the Lusitania. Allan Beattie was a passenger on the ship when she was struck on May 7, 1915. On May 15, from Folkestone in England, he wrote up this account in a 12-page letter. He notes that when the ship was struck, "I got an awful smash in the back from the water and was thrown about thirty feet on my face." He ran from the deck, against traffic, to his cabin to get his life preserver after kissing his mother goodbye (she too survived). He had to hang onto his bed to get his vest on in the darkness, the lights having gone out, before returning to the deck. Item 11. $15,000.

Since we are on the subject of sinking ships, here is an even bigger and more consequential such event. It, too, was deliberate, and involved far more than just one ship. This was the attack on Pearl Harbor, or evidently known in Japan as the "Battle of Hawaii." It comes from Japan, so the point of view was quite different from those of Americans at the time. It was not considered a day that will live in infamy there. Instead, it celebrates a massive public funeral for nine members of the Japanese Navy who deliberately sacrificed their lives that day. While we think mainly of the raid in terms of bombs from the sky, there were also several Japanese midget submarines sent out to explode themselves into the hulks of American ships. It was a kamikaze mission before those became commonplace late in the war. Item 29 is Special Attack Flotilla. It recounts a massive public funeral for the heroes, or "warrior gods," who gave their lives on this mission. The book includes an account of the attack, biographies of the nine who lost their lives, and the text of their final letters home. It also shows the funeral procession that took place in Hibiya Park in Tokyo, on April 8, 1942. What I have not determined is why this account was published in English. Who was the target audience? It certainly would not have been well-received in America, to say the least, nor any other English-speaking nation. $3,750.