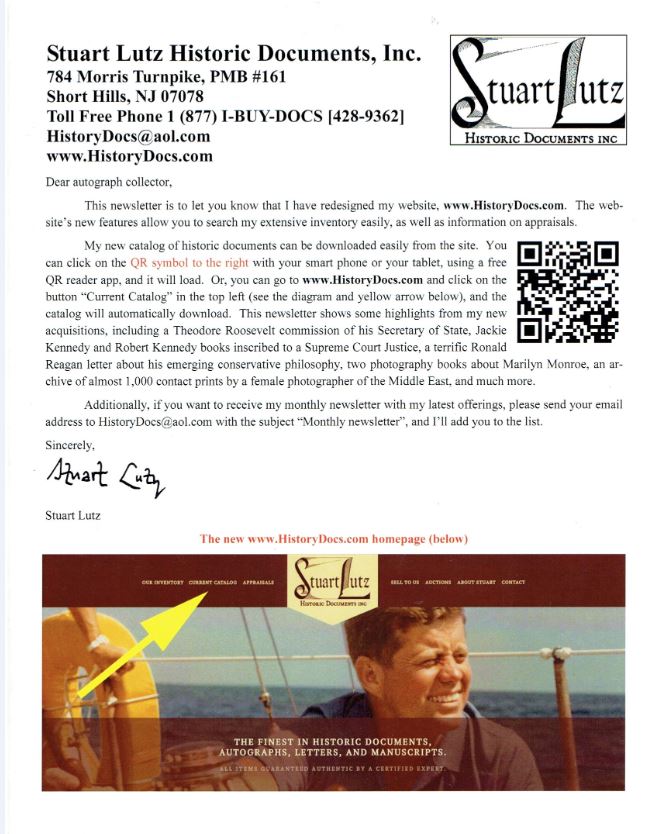 Stuart Lutz Historic Documents has issued a new catalogue of exactly what you would expect. It does not have a title or number, referred to at most as the "current catalogue," a name which naturally expires when the next one comes out. These documents are mostly highlighted by autographs of notable people. A large number feature American presidential signatures. They range from the great to the mediocre to the forgotten, along with a few first ladies and vice-presidents, other statesmen, business and military leaders, writers, and those who achieved recognition in other ways. There are a couple of Marilyn Monroe photo books, some signed financial documents, a signed image of Soviet Union leader Leonid Brezhnev, and a few letters from people who are not famous, but capture their eyewitness accounts of notable events of their times. If you collect such documents, or autograph material, there are things you will like to be found here. These are a few suggestions.

We will start with a type of document you don't see everyday. It is a commendation for Lieut. Cyrus A. Earnest for his brave ride during the Nez Perce War. This was not a proud moment in American history. The U.S. government had coerced some of the tribe into accepting a diminished amount of their ancestral land to make way for settlers and gold seekers. Some resisted, leading to the government sending troops out to round up the dissenters and force them onto a small reservation in Idaho. In 1877, the army chased the Nez Perce and their allies deep into Montana as they tried to escape, hopeful of joining Sitting Bull on the other side of the Canadian border. They were stopped short, leading to Chief Joseph's famous statement, "I will no longer fight forever more." Their forced submission was complete. None of this was the fault of Lieut. Earnest, who volunteered to to take a dangerous mission to obtain supplies, undoubtedly believing the army's cause was just. Dated October 21, 1877, the commendation notes that on two occasions, Earnest "displayed an energy and zeal worthy of commendation." It continues, "in making a forced journey of about 80 miles through Indian country, without rest or regard to your personal safety, thereby accomplishing the result desired. You showed that the confidence of the commanding General in your zeal energy and perseverance which had led to your selection for the duty had been well placed." Item 87. Priced at $1,500.

The poor treatment of America's natives by those who had recently immigrated to the land is hard to understand today, but perhaps this letter throws some light on it. The sad reality is most Americans then had little respect for the natives, seeing them as "savages" without ever realizing how savagely they themselves were behaving. Item 16 is a letter written by Galen Holbrook in 1820. Holbrook lived in Cummington, Massachusetts, and writes to his future wife in upstate New York. Holbrook writes about missionary work to the Native Americans, the residents of a "civilized and Christianized Country...and whose soil once was theirs." He then describes their condition, "behold the savages roaming in the howling wilderness in ignorance and the darkness and shadow of death, unenlightened by the radiant beams of the gospel of the Son of God, strangers to the blessings of refined social circle and to almost all the comforts of life. Unhappy lot, denied the favor of Heaven, exiles to misery and wretchedness, persecuted & driven away by a Christian people, possessed of little more humanity than they." Holbrook evidently meant well, understanding the natives were equally human, and yet he had obvious contempt for what he saw as a savage lifestyle, an attitude that led to so little sympathy for the natives by others whose motives were less kind. $350.

Calvin Coolidge was not America's most personable president. He didn't acquire the nickname "Silent Cal" by being the life of the party. That didn't change after he left the presidency. In 1930, he wrote to journalist Henry Stoddard, "You cannot realize how much I long for peace and privacy. Any public appearance of mine is accompanied with so many annoyances that I avoid them all I can." Just leave me alone, already! Item 21. $375.

Coolidge's predecessor in the White House obviously had far more in the way of social skills, even if there isn't much else positive one can say for his presidency. In 1917, while still a senator, Warren Harding declined an invitation from fellow senator Frank Brandegee in a way that goes beyond mere diplomacy. He writes, "I would rejoice to be your luncheon guest next Sunday, June 10, because it is easy to anticipate a bully grand time, but I find myself tied up by the coming of family guests to whom I am committed for that day." Item 43. $850.

President Benjamin Harrison was far less effusive in declining invitations. There was no attempt to be particularly diplomatic when he declined an invitation from Virginia politician John S. Wise - "Very sorry to disappoint you and Mr. Thompson but I cannot go. Benj Harrison." Item 45. $450.

Rutherford Hayes, winner of a most disputed presidential election, wrote a thank you letter to a his nephew in 1889 after receiving a family photograph. What caught my attention is his endearing nickname with his nephew. Along with signing the letter "Rutherford B. Hayes," he includes a "sincerely yours" from "Uncle Ruddy." Uncle "Ruddy?" I've never seen that name with Hayes before, but what else can you do with "Rutherford?" "Ruth" wouldn't be very good. Item 46. $800.

Here is a part of the original typed manuscript (typescript) for the novel Andersonville, by MacKinlay Kantor. Kantor wrote numerous novels over a 50-year career comprising the middle two quarters of the twentieth century. Andersonville was his most honored, winning the Pulitzer Prize for Fiction in 1956. It is the story of the horrific Confederate Civil War prison at Andersonville, Georgia. It combines the use of real people with fictional ones designed to depict life in this terrible place. It could be said that these two pages of the original are the most important. Certainly, if you don't have time to read it all, these are the two most logical pages. It is the first and the last pages of the novel. They come with a letter from Kantor to a friend that came with the two pages when he sent them. The pages contain some handwritten corrections by Kantor, with the last one being signed and dated by him. Item 58. $600.