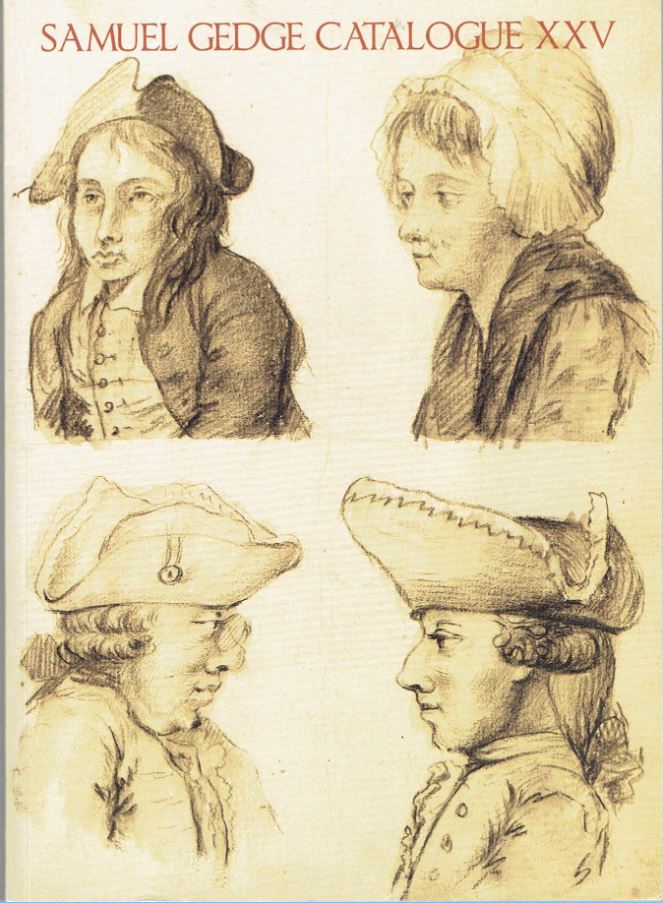 Samuel Gedge Ltd. has issued their Catalogue XXV. Gedge's catalogue includes some books, but more in the way of other sorts of related items – pamphlets, documents, manuscripts, broadsides, letters, prints, drawings, and even more ephemeral items. The 18th and 19th centuries dominate, with a few items even older. These are a few samples of what can be found in Gedge's 25th catalogue.

Anglican missionaries had a tough time in America once the Revolution came along. The Anglican Church was closely associated with England, its missionaries effectively English loyalists. Item 41 is A sermon preached before the Incorporated Society for the Propagation of the Gospel in Foreign Parts... by Richard Hard at the Parish Church of St. Mary-Le-Bow in 1781. At this anniversary meeting, Hurd had to break some bad news, "The society having received the certain but disagreeable information, that Mr. Fayerweather, missionary at Narragansett in Rhode Island, had...against the approbation of his parishioners, freely and voluntarily taken the oaths to the rebel states of America, he has been necessarily struck off the list of missionaries..." Priced at £650 (British pounds, or approximately $870 U.S dollars).

Item 68 is a broadside description of what must be a beautiful South Atlantic island paradise. The perfect getaway. The lovely island was under the control of the British East India Company in 1814, long a stopping point for ships. It describes the island's history, pleasant climate, cultivation of fruit and other crops, the English town, and its inhabitants. The following year, control was ceded to the British government, which had a new purpose for the island. This is The Island of St. HELENA, and this island in the middle of the South Atlantic, thousands of miles from anywhere, would be the new exile home for Napoleon, the not-so perfect getaway. The extreme isolation would keep him from making another escape back home. Some people might like this far off "paradise," but it was no place for Napoleon. Unfortunately, he had no choice. The British took him there in 1815, and he remained trapped on St. Helena until he died in 1821. After he died, control was returned to the East India Company. £750 (US $1,004).

This is a creepy business to be in, but someone had to do it. Item 65 is an invoice from April 17, 1841, from Aaron Freit of London to "Mr Hancock, leech dealer, Bath." This was a time when the use of leeches for blood letting was quite popular in England. It seems that Mr. Freit was a leech importer, while Mr. Hancock was a merchant, likely selling to physicians. The order was for 500 green leeches and 200 speckled ones. Gedge informs us that the speckled leech is considered preferable for medical treatment as it has a gentler bite and is less likely to cause irritation than is the green one. That is something to remember if ever you need to be treated with leeches. Item 65. £250 (US $335).

Item 35 is a children's book circa 1820. Most children's books at the time tended to be religious or moralistic, but not much entertainment, so it is nice to see one that attempted to entertain the young ones, even if it wasn't all that sophisticated. The title is The World Turned Upside Down; or No News, and Strange News. No author is given but it was printed by James Kendrew of York. It contains 29 woodcuts of the world turned upside down, with rhymes such as, "Here you may see what's very rare, the world turn'd upside down; a tree and castle in air, a man walk on his crown." £450 (US $603).

Mr. Emanuel offered a service to English tourists visiting the Netherlands city of Rotterdam around 1795. You would think they had walked there, but not likely since the countries are separated by water. Item 64 is a handbill he has provided in English announcing "Mr. Emanuel, Respectfully in forms the Ladies and Gentleman that he Extracts Corns in the most easy and fast manner he practiced many years in London..." He also "Prepared the imperial violit tooth Powder which Prevents the scurvy in the Gums and makes the teeth as With as ivory..." Despite an English clientele, one imagines English was Mr. Emanuel's second language. £350 (US $469).

Item 10 is a gentleman's writing box. It is covered in sharkskin-patterned black leather, and opens with working hinges, clasps, and lock. Inside is a domed lid for more space with interior compartments lined with pink silk. One of two brass-lidded ink bottles is still remaining. Space is available for stationery, letters being written and read, quill pens, blotting paper, and everything a traveling gentleman would need. Think of it as the laptop of 1780. It's size is roughly 8 ½" x 10 ½", perfect for a laptop, although its depth of 2 ½" is a bit thick for the latest models. £2,750 (US $3,686).