A Variety of Subjects Covered by Raptis Rare Books 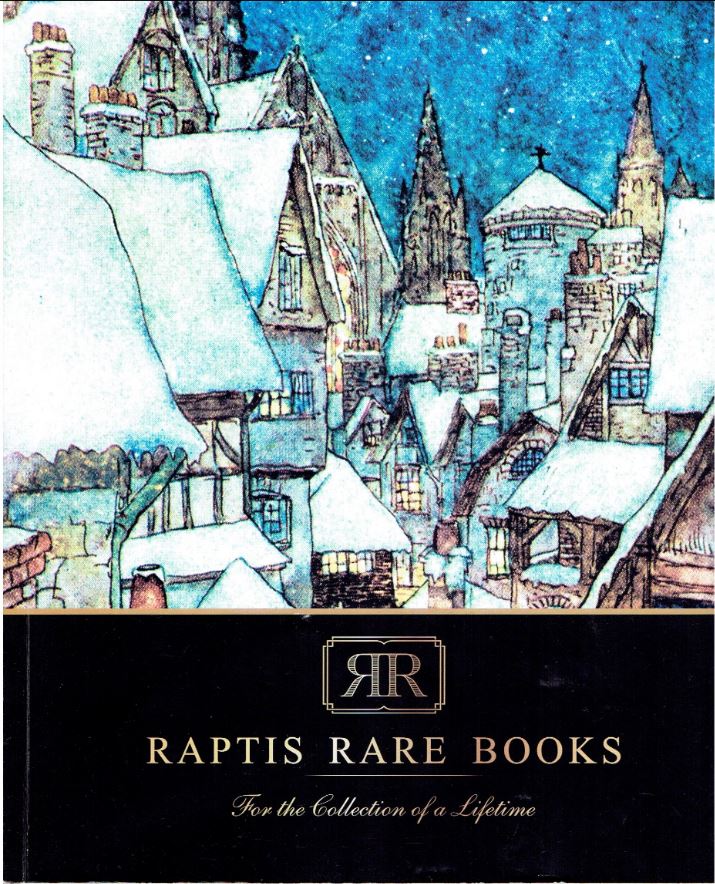 Raptis Rare Books does not place a title on their catalogues, but they do provide a table of contents to let us know what can be found. Here are the subjects covered in their latest catalogue: Holiday Selections, History & World Leaders, Literature, Children's Literature, Arts & Entertainment, Economics & Finance, Science & Exploration, and Sports & Leisure. That should be enough to interest most collectors, and this is a thick catalogue filled with exciting suggestions. These are just a few.

We will begin with a selection from "history," although we usually see this work under the subject of "travels & voyages." It is probably the most important work of Pacific exploration, certainly of British Pacific exploration. Actually, it is three books, not one, the official accounts of the three voyages of Capt. James Cook. Unlike most collections offered as a set, all three of these are in their first editions. The first voyage, under the title An Account of the Voyages...for making Discoveries in the Southern Hemisphere, was edited by John Hawkesworth, and published in 1773. Cook could not complete the work himself before he was gone on his second voyage. Cook sailed from England in 1768, with ostensibly the primary purpose being to observe the Transit of Venus, which could help scientists determine the size of the solar system. However, once this mission was completed, Cook was instructed to open a sealed envelope containing instructions for the remainder of his voyage. He then sailed to New Zealand, mapping its entire coastline, and to Australia, where they were the first Europeans to visit the eastern coast.

The account of the second voyage is entitled A Voyage towards the South Pole, and Round the World, published in 1777. This trip lasted from 1772-1775, and its main purpose was to determine whether there was a gigantic southern continent, long theorized to balance the greater land mass in the Northern Hemisphere. There wasn't. Cook was the first to penetrate the Antarctic Circle, but found nothing. Actually, he came close, but did not reach the much smaller Antarctica that does exist. The third account is A Voyage to the Pacific Ocean...for making Discoveries in the Northern Hemisphere, co-written with James King and published in 1784. Cook was unable to complete this volume as he was killed by natives while visiting Hawaii, which was discovered on this trip. This voyage lasted from 1776-1779, and Cook was sent to find the elusive Northwest Passage from the western side. Like so many before and after, he did not, but Cook charted the American west coast from California to the Bering Strait. Item 67005. Priced at $40,000.

If only Cook could have lived another two centuries, he would have been truly flabbergasted by this voyage. Next is Moon Shot: The Inside Story of America's Race to the Moon, published in 1994. The authors were two NASA astronauts, Alan Shepard and Deke Slayton. Shepard is most famous as the first American (second person overall) in space. It was just a 15-minute flight, not reaching orbit, but it did rise 116 miles into space, before landing 300 miles later. That was 1961. Just ten years later, Shepard was walking on the moon. He commanded Apollo 14, becoming the fifth and oldest (47) man to walk on the moon. He also became the first person to strike a golf ball (twice) on the moon, and it is safe to say his drives were the longest ever in the history of the sport. Item 56008. $95.

Next up we have The Writings of George Washington Being His Correspondence, Addresses, Messages, and Other Papers, Official and Private. Washington was not a prolific author, like Winston Churchill, but his ordinary papers from his illustrious career were still voluminous enough to fill up 12 volumes. The editor was Jared Sparks, a notable American historian of the first half of the 19th century, Unitarian minister, and President of Harvard. It was the most thorough effort to put together Washington's career in writing at the time of publication (1834-37). Sparks did receive some criticism as he cleaned up some of Washington's grammatical and spelling mistakes, but he did not change their meanings. $9,200.

Here is an odd description of a type of first edition of a book. This is not the first American edition, but the first edition printed in America. The story of Alice and her wondrous visit to Wonderland was conceived in 1862 by Rev. Charles Lutwidge Dodgson when he took the three Liddell children for a boat ride. He made up stories, but one of those children, Alice, insisted that he write them down. Alice Liddell became the protagonist for the book published a few years later, under the pen name "Lewis Carroll," Alice's Adventures in Wonderland. The book was originally to be published and printed in England, but Dodgson, and illustrator John Tenniel even more so, were dissatisfied with the reproduction of the drawings. They wanted the pages trashed. Still, Dodgson was practical about not wasting all those printed pages, so he shipped them off to America where tastes were less discerning, to be bound and sold there. Consequently, the first American edition was composed of pages printed in England. Therefore, item 63012 is actually the first edition to be printed in America, though it is the second American edition. It is also the first American not made from discarded pages. $2,800.

Next is a photograph. It is autographed five times over. It is a photograph of the Rolling Stones in 1964, just as they were beginning to get attention in America. The autographed photograph is of the five original members of the band – Mick Jagger, Keith Richards, Brian Jones, Bill Wyman, and Charlie Watts. Jones, the one-time leader, died in 1969 of drowning after years of terrible drug abuse, Wyman retired from the band in 1993. The other three soldier on, all these years (54) later. Item 43029. $4,500.