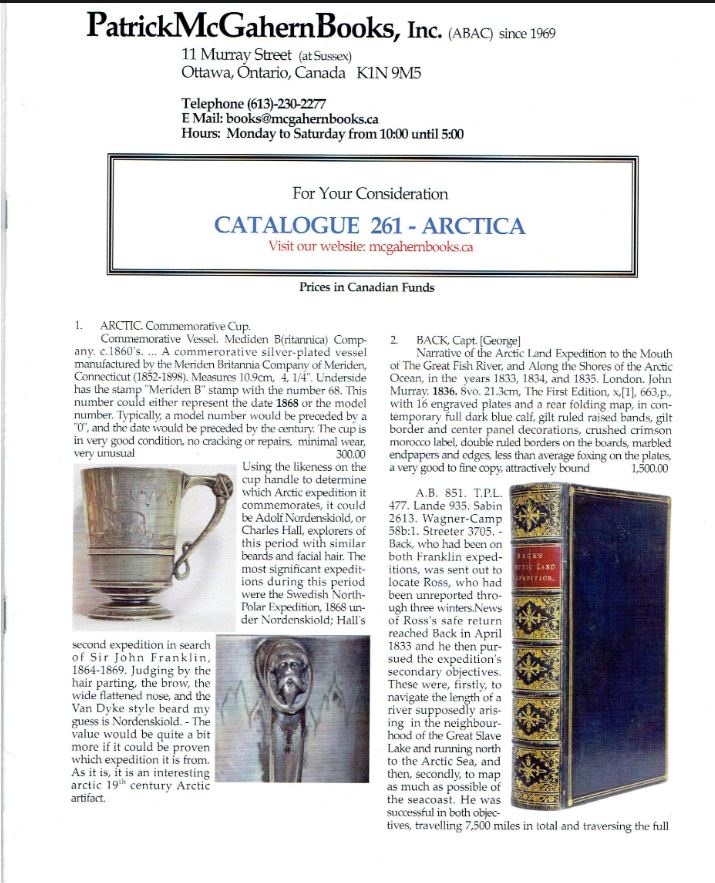 One thing you can count on from Canadian bookseller Patrick McGahern Books is catalogues that are cool. Actually, more than that – they are cold. This is true of their number 261, Arctica. It is filled with explorations and other visits to the land of endless winter. Even when the sun shines 24 hours a day, it is cold. And yet, people continued to make the trek, or voyage, to these far northern lands in the 19th century, long before reliable winter heating, supplies, or transportation could be counted upon. Here are a few of their tales, and other items from the Arctic.

It was long a hope of the British to find a Northwest Passage, a shorter route to Asia that did not require going all the way around the southern tip of South America or Africa. It was an elusive goal. The early attempts were made heading west, through Hudson Bay. By the 17th century, reports were that no such route existed. After a century of discouragement, they tried again. Item 13 is an account of the 18th century attempt, under the leadership of Capt. William Moor, A Voyage to Hudson's-Bay, by the Dobbs Galley and California, in the Years 1746 and 1747, for discovering a North West Passage... This account was written by the hydrographer and surveyor, Henry Ellis, and published in 1748. The expedition proved conclusively that there was no route through Hudson Bay, discouraging further investigations for almost another century, when explorers began looking for a more northerly route. Ellis' book also provides much information about the area, particularly the native population, of which little was known at the time. Priced at CA $2,000 (Canadian dollars, or approximately $1,554 in U. S. dollars).

John Ross led one of the early attempts to find a Northwest Passage in the 19th century by traveling well north of Hudson Bay. His account can be found in A Voyage of Discovery made under the Orders of the Admiralty, in His Majesty's Ships Isabella and Alexander, for the purpose of Exploring Baffin's Bay, and Inquiring into the probability of a North West Passage, published in 1819. Ross rediscovered Baffin Bay and confirmed the reports of William Baffin's discovery two centuries earlier. However, when he attempted to continue west through Lancaster Sound north of Baffin Island, he was turned back by a range of mountains. Or at least he thought he was. Ross named them the "Crocker Mountains," but unless you visit under the right atmospheric conditions, you will not see these mountains. They were but a mirage. Others on the trip so informed Ross, but he was unconvinced and returned to England. The result was that the admiralty never gave him another command. Ross sailed to the Arctic waters twice more, but these times under private sponsorship. Item 50. CA $7,500 (US $5,828).

Item 49 is an autograph document signed by Sir John Ross. It may be a little hard to decipher unless you read Swedish. Ross served as British Consul to Stockholm from 1839-1846. That was a good place to serve for someone who appreciated cold weather as much as Ross evidently did. It lists some stolen items, including gold, silver and china, and their values. It was signed by Ross in 1839. CA $150 (US $116).

Item 59 is Travel and Adventure in the Territory of Alaska, formerly Russian America – Now Ceded to the United States – and in various other parts of the North Pacific. This is a publisher's presentation copy of the first edition, published in 1868, of a book written by Frederick Whymper. Alaska may have been U.S. territory when the book was completed, but not when Whymper arrived. Whymper was part of the Russian-American Overland Telegraph Expedition of 1865-1866. That is itself an odd story. When the initial attempt to run a telegraph cable from America to Europe under the Atlantic failed, Western Union got the idea to take a route that required fewer miles underwater. The route from America to Europe requiring the shortest distance underwater runs from Alaska to Siberia. Unfortunately, it also requires far more overland coverage through some very harsh climates. The route ran from San Francisco through Oregon and Washington, British Columbia, Russian Alaska, under the Bering Sea, across Siberia, and on to Moscow. From there it could hook up with existing cables east to Europe. However, the plan was abandoned when a cable was run successfully under the Atlantic. Nevertheless, Whymper got to see Alaska, including its takeover by America, the Yukon, and eastern Russia. CA $450 (US $349).

There was a way to see the north without enduring the hardships and cold. You could view this two-hour illustrated lecture – All about Alaska the Klondike Gold Fields and the Wonderful Talking Machine. Item 5 is a large broadside on pink paper which featured the machine that "Talks Laughs Plays Sings." Today we would call it a phonograph, but in 1898, before the Victor Talking Machine Company started producing the machines for the public, this was still an amazing invention. As the poster explains, "The reproduction of the voice in either song or speech is so natural and the articulation so distinct that anyone would believe it a human being except that they knew the difference, and its reproduction of instrumental music is phenomenal." It continues, "Special arrangements have been made for magnifying the sound, so that all may hear the entire concert while comfortably seated in any part of the hall." These were the days before electronic amplification, so they had to use the technology of a megaphone to make the sound heard. Meanwhile, "50 Magnificent Views" would be "Projected from the Magic Lantern." We have come a long way in a relatively short period of time. This poster has room to add the date, place, and price of the performance but they have not been filled in. CA $900 (US $699).