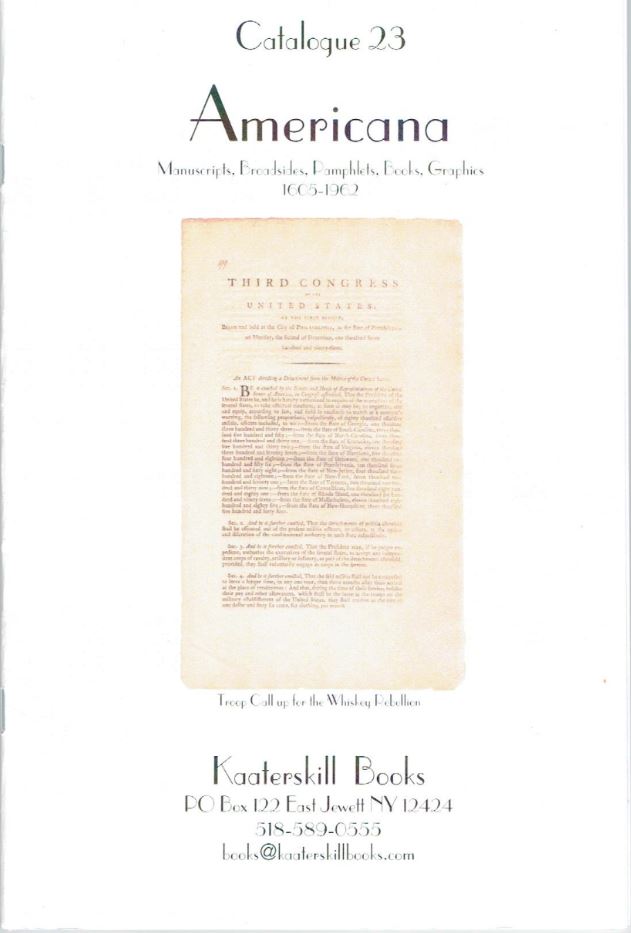 Kaaterskill Books has created a catalogue of Americana. Manuscripts, Broadsides, Pamphlets, Books, Graphics 1605-1962. While that's a large range, the concentration here is from the 19th century. There is much in the way of political and military related items, or topics that include both, such as the Civil War and Revolution. Add to that a smattering of other subjects and you have an outstanding look at events as they unfolded in American history. These are a few samples of what you will find.

America was not a good place to be after the Revolution if you were a British loyalist. The victorious former subjects were not terribly forgiving or welcoming, and most likely their land had already been confiscated. It was time to get out, as quickly and however possible. Many went to Canada, still safely British, but it was easier to get in with a proper recommendation. Item 2 is such a letter of recommendation for Nehemiah Hayden and some fellow loyalists. It comes from Sir Guy Carleton, who had taken over as Commander-in-Chief of British forces in America after hostilities ceased. The letter was sent to John Parr, Governor of Nova Scotia. It requests, "Sir. I beg leave to recommend to your excellency favorable notice and assistance the bearer Mr. Nemiah Haydon [sic] who is a zealous Loyalist and has rendered many services to government during the late war." He notes they will be beneficial to Nova Scotia as they are ship carpenters. Hayden and his friends were not alone. Carleton urged the Governor to accept some 35,000 loyalist refugees from America. Kaaterskill notes that such letters of recommendation are very rare. Priced at $5,000.

The Coppock Brothers were abolitionists and followers of John Brown. They met him in Iowa when Brown was seeking supporters for his raids in Kansas. They followed Brown to his ill-fated attack on the arsenal in Harper's Ferry. Edwin Coppock was captured and hanged, Barclay escaped and returned to Iowa. The Governor of Virginia sent a notice for extradition of Coppock to the Governor of Iowa, Samuel Kirkwood. Kirkwood had no desire to comply with Virginia's legal demand, so he replied by citing a legal technicality in the paperwork on which to deny it. His response is found in this Special Message of Governor Samuel J. Kirkwood, in Reply to a Resolution of Inquiry, Passed by the House of Representatives. March 22, 1860, in Relation to the Requisition of the Gov. of Virginia for One Barclay Coppic [sic]. The Virginia Governor was forced to redraw the papers, but by the time proper ones were presented, Coppock had escaped to Canada. He later returned to America to join the Union Army and was killed in action in 1861. Item 35. $400.

John Brown sought to give the slaves their freedom, but Jefferson Davis was concerned about their welfare in a different way. One might question the sincerity of the man who led a government created for the purpose of keeping the slaves as slaves, but hear him out. Item 22 is the President's Message. To the Senate and House Representatives of the Confederate States, published in 1863. Davis claims, "Nor has less unrelenting warfare been waged by these pretended friends of human rights and liberties against the unfortunate negroes." He charges that wherever they take control, the Union army forces able bodied Negroes to serve while leaving women, the old, and children to starve or go to camps with high mortality rates. "Without clothing or shelter, often without food, incapable, without supervision, of taking the most ordinary precautions against disease, these helpless dependents, accustomed to have their wants supplied by the foresight of their masters, are being rapidly exterminated, wherever brought in contact with the invaders." And yet still they fled to Union forces whenever the opportunity arose. Those were crocodile tears Davis shed. $250.

This man made a very large bet on a presidential election with a kicker that almost came back to haunt him. William S. Annis of Methuen, Massachusetts, was a lucky man indeed. Annis bet $200 that William Henry Harrison would win the election of 1840. Two hundred dollars in 1840 is the equivalent of over $5,000 today. The kicker in this deal was not only that Harrison be elected, but that he live until his swearing in on March 4, 1861, four months later. Harrison obliged Annis, but just barely. He died only a month after taking office. Item 36 is a legal note containing the wager. $125.